Fr. James Martin, S.J.: It’s Lent. Give to the poor—generously

Fr. James Martin, S.J.: It’s Lent. Give to the poor—generously 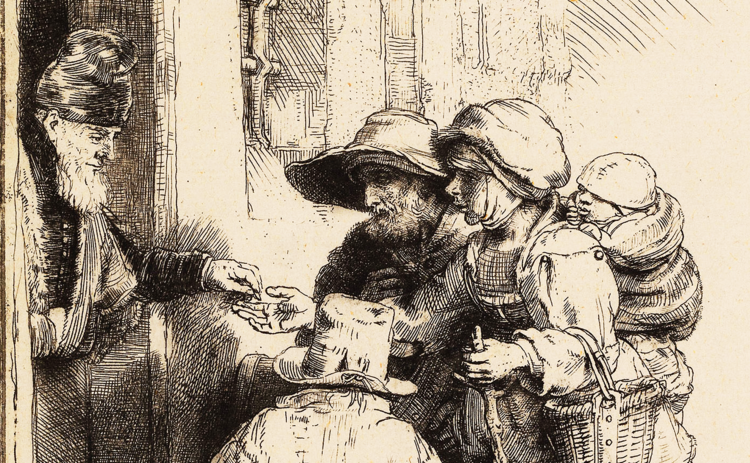 "Beggars Receiving Alms at the Door of a House" illustration by Rembrandt van Rijn, 1648. (The Metropolitan Museum of Art)

In the last two weeks we’ve spoken about two of the three traditional pillars of the Lenten spiritual journey: prayer and fasting. This week let’s look at almsgiving. In other words, giving money to the poor or to charitable organizations. For some reason, many Christians object to this. They say, first, that you shouldn’t give money to a homeless person because they’ll just use it to buy a drink or drugs. But that’s unfair, as I see it. You have no idea what they’ll do with it. And if you’re that worried you can buy them food. People also object to giving money to charitable organizations, because they supposedly coddle the poor. But that’s even less objectionable, since you know that they’ll use it wisely. But even if you had those objections, it wouldn’t matter. Because Jesus asks us to be generous with the poor. It’s one of the foundations of his public ministry: caring for the poor himself and asking his disciples to do so. During Lent you are called to give even more generously, to stretch yourself. As Jesus said, as often as you give to these little ones, that is the poor among us, you’re giving to him.

And no on has given me so much as a dime.

Oh for the love of God. What is it with you self-made folks. Just smile and fork over a little money for those less fortunate. My husband and I contribute where we each see fit,but we both agree on the Capital Area Food Bank’s mission. Catholic Relief Services is highly rated and is a wonderful organization that helps people outside of the US. You will never complain about anything again if you get a glimps of the mass devastation and destruction CRS works through.

My giving, with due modesty, takes several forms. The first is service to people in need. I live in a nursing home, and try my best to be generous in terms of assisting other residents (whether I know them as friends or even if they're strangers) with their personal needs. This can include pushing residents who use wheelchairs to where they need or want to go. It also can mean assisting my roommate with dressing or getting him snacks. I also help the staff with cleaning up after social activities. This is more minor in nature, but I also post tweets and write letters to my local newspaper about the needs of various people: pregnant women, disabled people, senior citizens, the homeless, people addicted to drugs, and immigrants. Finally, each month I receive a modest sum of money, and contribute to various Catholic/religious or secular charities. My favorites are Alcoholics Anonymous, Habitat for Humanity, Catholic Relief Services, the Salvation Army, a Catholic high school for special needs youth, my parish, and a pro-life alternative to abortion home that provides free day care for low income
pregnant women so that they can complete their educations. This also is a small point. Once a week my dear Mom and I go to McDonald's across the street from the nursing home for lunch. I occasionally put change into a donation box for the Ronald McDonald House. I also from time to time buy "Thinking of You" or "Get Well Cards" at the local pharmacy for friends, my former neighbors, family, and nursing home residents and staff. This is a win-win. I enjoy receiving cards in the mail, and enjoy sending cards; it's a simple way to let people know tyey are in your thoughts.