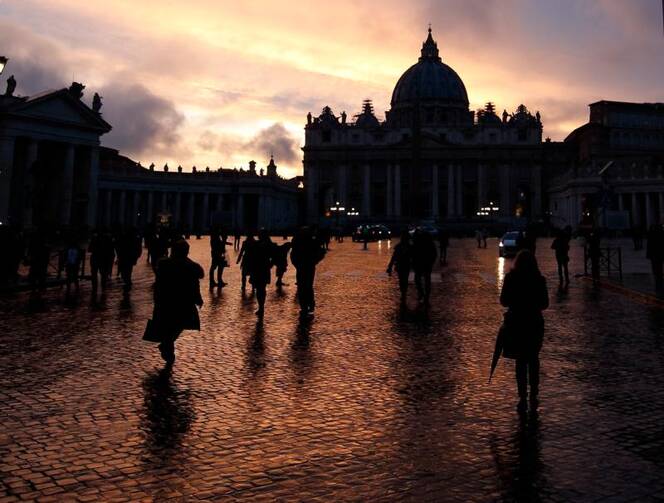 A sunset after a day of rain illuminates the cobblestones near the Vatican in Rome March 5, 2018. Pope Francis' sixth anniversary as pope is March 13. (CNS photo/Paul Haring)

VATICAN CITY (CNS) -- Catholics cannot place blame for the sexual abuse crisis on "those who came before us" in an attempt "to present ourselves as 'pure,'" said the editorial director of the Vatican media outlets.

The church today must ask God to free it from evil, said Andrea Tornielli, editorial director of the Dicastery for Communication.

On the eve of Pope Francis' sixth anniversary as pope -- he was elected March 13, 2013 -- Tornielli offered a quick review of the pope's past year, focusing particularly on his plea for Catholics to pray the rosary in October, asking for protection of the church from attacks by the devil.

Tornielli's review included listing the Synod of Bishops on young people, the Vatican summit on child protection and clerical sexual abuse and the pope's trips abroad.

But the piece published on Vatican News March 12 also mentioned the call for Pope Francis to resign issued by Archbishop Carlo Maria Vigano, the former nuncio to the United States, who claimed in August that the pope knew of and ignored sanctions issued against then-Cardinal Theodore E. McCarrick because of sexual misconduct.

Pope Francis' sixth year in office, Tornielli said, "was characterized by the scourge of abuse and by suffering from internal attacks. His response was a call to return to the heart of faith."

In the face of the McCarrick case and Archbishop Vigano's letter, he said, the pope "asked all the faithful in the world to pray the rosary every day during the Marian month of October 2018 to unite themselves 'in communion and penance as the people of God in asking the holy mother of God and St. Michael the Archangel to protect the church from the devil, who always tries to divide us from God and each other.'"

"Such a detailed request is unprecedented in the recent history of the church," Tornielli said.

The pope's request demonstrated an awareness of "the gravity of the situation," but also a conviction that human efforts alone would not remedy the situation.

"Once again, the pope has recalled what is essential: The church is not made of super-heroes -- or even super-popes -- and does not move forward by virtue of its human resources or of its strategies," Tornielli wrote.

The Catholic Church knows that evil is present in the world, that original sin exists and that to be saved "we need help from above," he said. "Repeating that does not mean diminishing the personal responsibility of each individual or the responsibility of the institution but of situating them in their real context."

While not mentioning reports putting much of the blame for failing to handle the abuse crisis adequately 20 years ago -- pointing figures at St. John Paul II and the cardinals closest to him -- Tornielli said, "it would be an error put the blame on those who came before us, and to present ourselves as 'pure.'"

Today and every day, he said, the church must pray to be "delivered from evil. This is a fact of reality that the pope, in continuity with his predecessors, has constantly recalled."

Acknowledging how the past year was "troubled" for Pope Francis, Tornielli insisted that the pope was right to push for more effective norms, responsibility and transparency, but also to realize that they would not be enough to end the crisis.

The church, as Pope Francis has taught, must recognize "herself as a beggar asking for healing, in need of mercy and forgiveness from her Lord."

Yes. The abuses are a scourge. Yes. They are criminal. Those committing these crimes should face the criminal justice system. BUT, the issue that drove 80% of the abuses is homosexuality, which, when acted upon is sinful. Let’s just be honest and recognize this irrefutable fact. Will the truth set us free? Will covering it up corrupt is? Yes.

Craig B. Mckee
3 years 8 months ago

"That the Vatican continues to speak of a scandal instead of a crisis, or at least to use the terms interchangeably, suggests an unwillingness to come to grips with reality: to admit that there is persistent moral failure — at times criminal — protracted over generations within the clerical and hierarchical leadership and diffuse throughout the local and national Churches, reaching all the way to Rome and through the Curia — its precise extent and depth there is not yet fathomed — and all the way to the Apostolic Palace." [where Pope Francis wisely chooses NOT to sleep!]
https://www.catholicworldreport.com/2019/03/13/at-six-year-mark-francis-pontificate-struggles-with-crisis-as-stakes-increase/