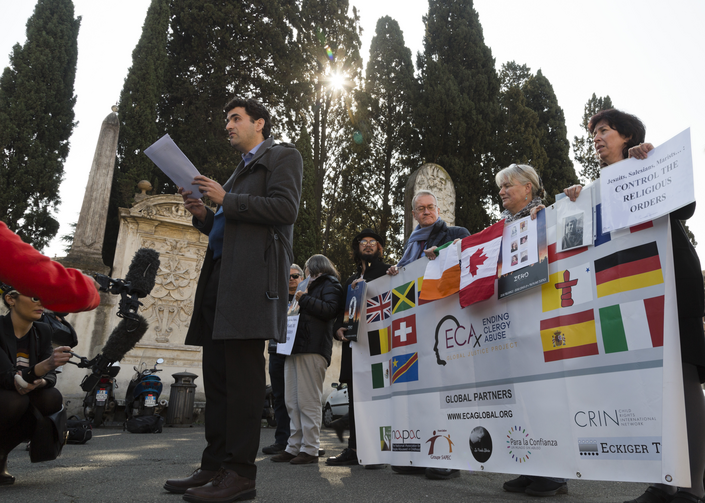 Child psychologist and founding member of the Ending Clergy Abuse (ECA) organization, Miguel Hurtado from Spain, center, reads an open letter to the Benedictine order outside the St. Anselm on the Aventine Benedictine complex in Rome on Feb. 22. (AP Photo/Domenico Stinellis)

A strong call for the revision of “the current legislation on pontifical secrecy” was made by Linda Ghisoni, 53, a professor of canon law at the Pontifical Gregorian University, in her keynote address to the Vatican summit on the protection of minors on Feb. 22.

In addressing the abuse crisis, Ms. Ghisoni called for “the dynamic involvement of the whole people of God.” She said, “The laity, the consecrated persons are not to be the mere executors of orders by clerics but are all servants in the one vineyard,” making their individual contributions and remaining “involved in the discernment that the Spirit suggests to the church.”

Ms. Ghisoni, undersecretary for the Dicastery for the Laity, Family, and Life and the mother of two, knew she was touching on a very sensitive topic in the Vatican but she spoke boldly—with parrhesia, as the pope, who was present today, had encouraged on the first day of the summit.

Ms. Ghisoni called for setting up councils at a diocesan or regional level “that operate in a co-responsible manner with the bishops and religious superiors, supporting them in this task with competence.”

[Want to learn more about what’s happening at the Vatican? In our new podcast, Gerard O’Connell and Colleen Dulle will take you behind the headlines for an intergenerational conversation about the biggest stories out of the Vatican. Listen now.]

In the territory of each episcopal conference, she said, independent consultative commissions could be created “to advise and assist bishops and religious superiors and to promote a uniform level of responsibility in the various dioceses.” These commissions should be composed of lay people but “without excluding religious and clergy.”

In addressing the abuse crisis, Ms. Ghisoni called for “the dynamic involvement of the whole people of God.”

They are “to give advice and assistance” to their pastors and evaluate their actions “with Gospel criteria” and also inform the faithful in the territory “about the appropriate procedures.”

She said these “national advisory commissions,” through regular reports and meetings, “can contribute to ensuring greater uniformity of practices and an increasingly effective confrontation, so that particular churches learn from each other in the spirit of mutual trust and communion, with the aim of actively taking on and sharing concern for the smallest and the most vulnerable.”

Ms. Ghisoni began her talk in a striking way, saying that in the face of the wounds of those injured by clergy abuse, “kneeling would be the appropriate posture to deal with topics of these days. Kneeling before the victims and their families, in front of the abusers, their collaborators, those that refuse, those who are unjustly accused, the negligent, those who have covered up, those who tried to speak up and act but [were] silenced, the indifferent.”

She told participants, “[We should] kneel before the merciful Father, who sees the lacerated body of Christ, his church. He sends us to take responsibility, as his people, of the wounds and to cure them with the balm of his love.”

Ms. Ghissoni was the first of the three women chosen to address this summit, the other two—Veronica Openibo, S.H.C.J., a Nigerian religious superior, and Valentina Alazraki, a Mexican television journalist—will speak tomorrow.

When she finished her 30-minute address, Pope Francis intervened and said, “Listening to Dr. Ghisoni I heard the church speaking of herself.” He said “the logic of her thought was that of a mother.”

Ms. Ghisoni also spoke strongly on issues of accountability and called for changes to the “current legislation on pontifical secrecy.”

Pope Francis: “Listening to Dr. Ghisoni I heard the church speaking of herself....the logic of her thought was that of a mother.”

In September 2017, members of the Pontifical Commission for the Protection of Minors had asked Pope Francis to reconsider Vatican norms maintaining the imposition of “pontifical secret” in the church’s judicial handling of clerical sex abuse and other grave crimes. The secret ensures cases are dealt with in strict confidentiality. Vatican experts have said it was designed to protect the dignity of everyone involved, including the victim, the accused, their families and their communities.

Ms. Gishoni argued that revisions of the secrecy legislation could proceed in a way “that protects the values it intends to protect, namely the dignity of the persons involved, the good reputation of each other and the good of the church,” but at the same time allows “the development of a climate of greater transparency and trust and avoids giving the idea that the secret is to hide problems rather than to protect the assets at stake.”

“It will also be necessary to refine criteria for a correct communication in a time like ours in which the requirements of transparency must be balanced with those of confidentiality,” Ms. Ghisoni said.

She argued that “an unjustified confidentiality, as well as an uncontrolled disclosure, risk generating bad communication and do not render a service to the truth.” Indeed, “accountability is also to know how to communicate,” she said.

“If you do not communicate, how can you be accountable to others? So what communion can there be among us?”

She told the cardinals, bishops and heads of religious orders gathered in the hall: “I have nothing to teach you,” but “by actively listening to each other, we commit ourselves to work together so that in the future we no longer need another event like this.”

Focusing her talk around the theme of “communion: act together,” she said that “the foundation of accountability...is to be sought in the nature of the church as a mystery of communion.”

Drawing on “the ecclesiology of communion” developed from Vatican II, Ms. Ghisoni spoke about the church “as the people of God on a journey” and said all the members of this people have “rights and duties” because of their baptism. They have “a mission,” she said, in which “everyone is called to live according to the gifts they have received, not alone but as a people.”

Based on this understanding of communion in the church, she said, it is “erroneous” for a bishop “to think that matters concerning the church can be resolved by him acting alone or exclusively among peers.” It is also “erroneous,” she continued, to argue that “the involvement of the laity as such in matters that touch the ordained ministers is a guarantee of greater correctness, as they would be ‘third parties’ with respect to events.”

She reminded the summit’s 190 participants that this gathering is neither “the starting point” nor “the point of arrival,” that much has been done already to respond to the crisis of the abuse of minors by clergy in the church. But much more is required to reach the goal of an end to abuse, she said, and it requires the input of every member of the people of God.

She called for “a specific chapter” to be inserted in national guidelines for dealing with abuse, a chapter that spells out “reasons and procedures of accountability.” Ms. Ghisoni told participants, “to foresee an ordinary procedure of verification should not be misunderstood as a lack of trust toward the [religious] superior or bishop.”

Indeed, “to say that the bishop must always give a report of his work to someone does not mean subjecting him to a control or putting him in a-priori distrust,” she said. Rather, it involves “engaging him in the dynamics of ecclesial communion where all the members act in a coordinated way according to their charisms and ministries.”

“Identifying an objective method of accountability not only does not weaken [the bishop’s] authority,” Ms. Ghisoni said, but “values him as a shepherd of a flock, in his own function that is not separated from the people of God for whom he is called to give life.”

“The logic of communion,” Ms. Ghisoni said, “does not stand as an accusation and a defense” but involves “working together for the good of all.

“Accountability is, therefore, a form, even more necessary today, in this logic of communion.”

In addressing the abuse crisis, Ms. Ghisoni called for “the dynamic involvement of the whole people of God.”

Wow what a concept..actually allowing the laity to have a voice in their church. Wish I thought of that.

In 1966 the great German theologian Karl Rahner, SJ, in a lecture in Freiburg emphasized that “those invested with hierarchical office still remain finite, sinful human beings” and presented some reflections which are remarkably appropriate in relation to today’s moral crisis in the Church.

“What would the Church of the past have been without an Anthony, a Benedict, a Francis of Assisi, a Catherine of Siena, a Teresa of Avila, and countless others,” Rahner asked, “who had a charismatic mission to the Church and were in her but did not belong to the hierarchy of office? The epoch-making promptings of the Spirit for his Church are very often, perhaps even mostly, not imparted to office; the Spirit blows where he will (p. 35)….

“Those invested with hierarchical office still remain finite, sinful human beings (p. 37)…. Even so they do not manage to destroy God’s truth in the witness of his Church (p. 39)….

“Criticism and a critical public opinion are necessary in the Church -- today more so than ever. The day of intrigue is over, in the Church as elsewhere; Church people and office-bearers must learn to love the Church through loyal service, even though today it is plainer than perhaps it used to be that the Church will only become the bride ‘without spot or wrinkle’ when the Lord returns and history ends (pp. 40-41)…..

“One thing all of us should, nay must avoid: the unctuous hypocrisy of the self-righteous who consider that they cannot be challenged (p. 42)….

“A man invested with … office may and must say with the Apostle: ‘For what we preach is not ourselves, but Jesus Christ as Lord, with ourselves as your servants for Jesus’ sake…. But we have this treasure in earthen vessels, to show that the transcendent power belongs to God and not to us’ (2 Corinthians 4:5,7.”

This material is taken from the book, SERVANTS OF THE LORD, by Karl Rahner (New York: Herder and Herder, 1968), pp. 14, 32. Surely today Fr. Rahner would say “one” or “person” rather than “man” and would not use the male pronoun in referring to God. Tomorrow I will offer some more very appropriate and helpful quotes from the book.

Excellent insights. For too long the "whole people of God" have been marginalized, involved only to the extent that a rubber stamp on the clerical decision was needed. I hope that this does not turn out to be another "dynamic involvement" in name only.

Excellent insights. For too long the "whole people of God" have been marginalized, involved only to the extent that a rubber stamp on the clerical decision was needed. I hope that this does not turn out to be another "dynamic involvement" in name only.