Will the summit on abuse bring meaningful changes in Rome? 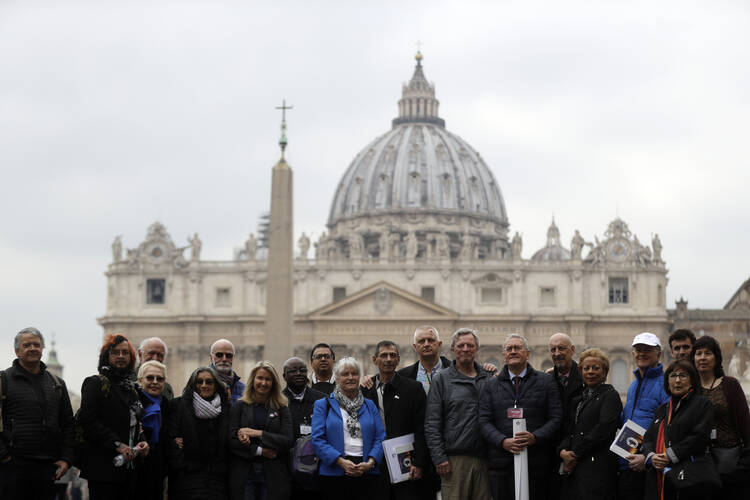 Members of the Ending of Clergy Abuse organization and survivors of clergy sex abuse outside St. Peter's Square on Feb. 18. (AP Photo/Gregorio Borgia)

“So much is at stake this week...I hope something important comes from it,” Anne Barrett Doyle, the co-director of BishopAccountability.org, told reporters at the Foreign Press Association in Rome on Feb. 19, two days before the Vatican summit on the protection of minors in the church is scheduled to begin on Feb. 21. But if nothing substantial comes of the meeting, Ms. Barrett Doyle said it is her hope “the energy of change” can be assumed by secular forces “so that changes will come from the outside, through attorneys general, grand jury investigations and so on.”

“The Catholics of the world are grieving, disillusioned,” she said, because of “the sexual abuse of thousands of minors by clergy in past decades and bishops who covered up.”

“We all know,” she added, “that canon law has to be changed so that it stops protecting the priesthood of ordained men over the lives of children.

“I believe the church is no way close to enacting the reforms to end this epidemic,” she said, “which consists of two aspects: the sexual assault on minors by priests and the cover-up by bishops.”

BishopAccountability.org is one of the many advocacy groups for survivors of abuse by clergy that have descended on Rome this week from all over the world to highlight the problem ahead of the summit.

“We all know,” she added, “that canon law has to be changed so that it stops protecting the priesthood of ordained men over the lives of children.”

Ms. Barrett Doyle explained that in advance of the summit her organization had reviewed the church’s response to abuse in eight countries with the highest numbers of Catholics—Brazil, Mexico, the Philippines, the United States, Italy, France, Colombia and the Democratic Republic of the Congo, which together represent 50 percent of the world’s Catholics.

She said the review showed that Brazil, with 172 million Catholics, has not posted a policy for handling abuse allegations on its website. “The crisis is invisible there,” she alleged, though her group had identified some 90 priest abusers in Brazil in 2012 and believes there are “thousands” of cases.

The church in Mexico, with the second largest Catholic population, claims to have dealt with only one abusive priest, while just four have been convicted of this crime. But, she said, the president of the Mexican bishops’ conference described clergy sex abuse as “a bottomless well” and is seeking “unusual new faculties” from the Vatican to deal with the problem.

In the Philippines, the third most Catholic country in the world, the church has had “a lax policy” since 2003 (though it has been removed from the website) and “no priest has been convicted of child sex crimes.”

Ms. Barrett Doyle said the church the Philippines “lets offenders return to the ministry” and “bishops don’t report priests” because they “have a relation that is analogous to father-son with them.” She charged that the Philippines’ church also tolerates “priest fathers” on “a one-child quota system.”

BishopAccountability.org found that globally eight bishops conferences—Brazil, Congo, Peru, Venezuela, Nigeria, India, Ecuador and Uganda—have not published guidelines on how to respond to child abuse and that only one of 20 nations in the world with the highest number of Catholics has a zero-tolerance policy—the United States.

Pope Francis “has the power to change the laws so that every priest found guilty of abusing minors is promptly removed from the ministry,” she said, “but I think the Vatican is continuing to resist the fundamental reforms.”

The importance of this summit of the presidents of the world’s 114 bishops’ conferences and of the Eastern-rite churches, which Pope Francis has convened, was underlined by the BishopAccountability.org survey. Pope Francis has said that he wants all of the church’s national conferences to be “on the same page” in terms of the response to the abuse problem.

She said that she was “happy and encouraged” by his letter to the Chilean bishops but worries he now “seems to be on the retreat from consolidating reforms” because “he has not acted in a systematic way to change things, by removing bishops and laicizing them,” except in a few cases like that of the former cardinal Theodore McCarrick.

“He has the power to change the laws so that every priest found guilty [by Vatican standards] of abusing minors is promptly removed from the ministry,” she said, “but I think the Vatican is continuing to resist the fundamental reforms.”

Referring to the presidents of the bishops’ conferences attending the summit, she added, “I don’t think these bishops are bad men; I think there is a really bad system.”

She said, BishopAccountability.org “has a list of 101 bishops accused [of abuse or cover-up], and those who have been removed from office still carry the title bishop-emeritus.”

She noted, moreover, that the evidence shows that “bishops who are abusers are particularly bad when it comes to allegations against priests.” Ms. Barrett Doyle suggested that the Vatican install a proper internal database of all priests so it could quickly identify individuals who are alleged abusers.

Ms. Barrett Doyle was accompanied at the press briefing by Phil Saviano, 65, a board member of BishopAccountability.org, a survivor of abuse who took his story to The Boston Globe and later helped its Spotlight reporting team. “I first went public in 1992, and since then I think the church has made some progress,” Mr. Saviano said.

Describing himself as “an optimist” despite all he has been through, he added, “I hope that something good will come out of this summit.”

Mr. Saviano recognizes that Pope Francis “does seem to be capable of learning on the job” but said, “the question is how much power does he have to make changes on his own,” alluding to resistance within the Vatican and the church on this matter.

He emphasized “the importance of releasing names of priests and bishops who are found guilty,” even if it this means according to “the Vatican criteria for guilt,” in which case, he said, “we should know what those criteria are.”

Ms. Barrett Doyle thinks the Vatican has “played down the expectations” for this summit “because at the end they want to present us with a surprise, perhaps with something modest.”

Another story completely skipping by the fact that 80% of reported abuse is not generic "sex abuse of minors," it's homosexual predation on young men by clergy. This is why so much US laity is upset at the Vatican's handling, and many bishops in the USCCB as well. Until we address the seriousness of homosexual infidelity in the clergy and the hierarchy, the problem will persist.

I agree. I think researching diocese and religious order priorities prior to donations is critical. I also would like to see an investigation of tax money going to Jesuit charities and others with an inordinate promotion of political programs..

articles like this give me a strong feeling of deja vu...I feel like Bill Murray in the movie Groundhog Day--reading the same stories over and over.

Prayer can move mountains. Rome needs our prayers. We need to pray for the conversion of Rome.

In order for the Papal Summit at the Vatican to be a success for survivors of clergy abuse, SNAP calls for Pope Francis to:

--Fire any and all bishops or cardinals who have had a hand in clergy sex abuse cover-ups,
--Impose dramatic and punitive consequences to deter any future cover-ups,
--Eliminate any directive for church staff to report abuse to bishops and instead direct all church staff and officials to make reports to law enforcement,
--Compel bishops around the world to turn their files over to law enforcement for independent investigations into their handling of clergy sex abuse cases, and
--Order your bishops and other hierarchs to cease lobbying efforts against legislative reform that would benefit survivors.

Until these actions take place, children are not safe within the Catholic church.

Judy Jones, SNAP "Survivors Network of those Abused by Priests"

Well, to expect from the Vatican summit on abuse to bring meaningful changes in Rome is completely misplaced one. The simple lay faithful expect that our local cardinals, bishops and priests will change and convert to Christ. But, what an irony, how can one expect the transparency from hierarchs gathered there when most of them have themselves been involved in active cover up and justification of homosexual activities within the CC. Without cleansing the CC from homosexuals, the uprooting of paedophilia is a "dream of head cut off".