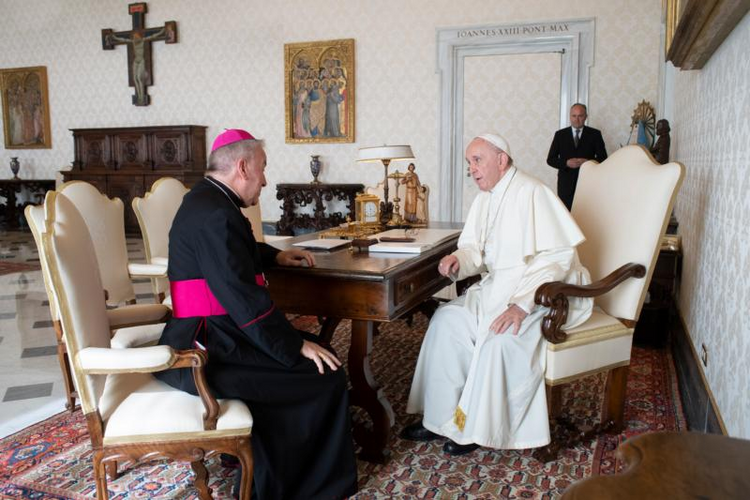 Archbishop Luigi Ventura, the Vatican nuncio to France, meets with Pope Francis at the Vatican in this file photo from Oct. 18, 2018. French authorities confirmed Feb. 15 they are investigating an allegation of sexual assault filed against Archbishop Ventura. (CNS photo/Vatican Media)

VATICAN CITY (CNS) -- Italian Archbishop Luigi Ventura, 74, a Vatican diplomat who once served in Canada, Chile and western Africa, is under investigation by police in Paris for allegedly sexually assaulting a city official.

The Vatican learned from news reports that the investigation had been launched and it was "waiting for the results of the investigation" by city prosecutors, said Alessandro Gisotti, interim director of the Vatican press office, in response to reporters' queries.

A French judicial official confirmed to the Associated Press Feb. 15 that the prosecutor's office in Paris had opened an investigation into an allegation of "sexual aggression."

A new exposé on homosexuality in the Vatican is coming out next week. What can we expect?
Michael J. O’Loughlin

The French newspaper, Le Monde, reported that the diplomat was suspected of having sexually molested a young male employee at the Paris city hall Jan. 17, the day the mayor was giving her New Year's address to diplomats and other leading figures.

Archbishop Ventura has been serving as apostolic nuncio to France since 2009. Prior to that posting, he was the Vatican's representative in Canada between 2001 and 2009, helping with preparations for St. John Paul II's visit to Toronto for World Youth Day in 2002.

A Vatican nuncio plays an important role in compiling recommendations to the pope concerning the appointment of new bishops and archbishops in the country he is placed.

This is the next wave of clergy abuse that needs exposing - the abuse of adult women and men. I have been researching this for a number of years now. Some of my findings and conclusions can be found here https://eprints.qut.edu.au/96038/ and here https://journals.equinoxpub.com/index.php/JASR/article/view/32747 . Other links can be found on my website here https://www.catholicmetoo.com/ .

I wish America would stop publishing these "teaser" articles unless they can provide more concrete factual information. What exactly did this 74yr old nuncio do?
Here is a better piece of reporting=
https://www.bostonglobe.com/news/world/2019/02/15/vatican-envoy-france-facing-sexual-aggression-probe/cM2Z6GTxyPhHDCAEKb42oK/story.html

1
Older Catholics: We need to talk about our sex lives
Valerie Schultz
2
Catholic parishes in Germany to include gay and lesbian couples in planned ‘blessing services for lovers’
3
Review: Melinda Gates and her struggles with the Catholic Church
Emma Winters
4
‘He loved my Cajun jokes!’ Sister Helen Prejean on Daniel Berrigan
Helen Prejean, C.S.J.
5
Read: Pope Francis’ May prayer to Mary for the end of the pandemic
Pope Francis

Paul Elie: Daniel Berrigan was a fierce critic of the United States. He was also a great American.
Can we imagine Daniel Berrigan’s portrait, all gussied up, unfurled above the high altar of St. Peter’s? I know I can; but on his centenary it is more than enough to envision this great American’s visage on view in a gallery in the nation’s capital.
Paul ElieMay 05, 2021

As the Covid-19 crisis continues, Brazil’s elderly rely on the church’s pastoral outreach
The Pastoral da Pessoa Idosa (“Pastoral Care for Elderly Persons”) reaches 170,000 seniors all over Brazil. The efforts and interventions of the ministry’s workers are built around monthly home visits.
Filipe DominguesMay 05, 2021 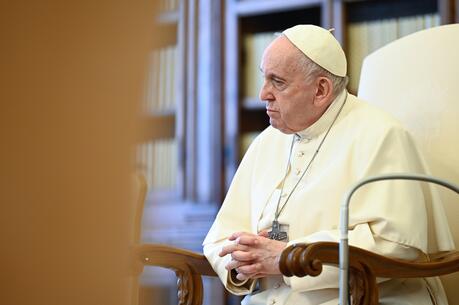 Pope Francis: In Jesus, there is no conflict between contemplation and action
“There is only one great call in the Gospel, and it is that of following Jesus on the way of love,” Pope Francis said in his weekly Wednesday audience. “In this sense, charity and contemplation are synonymous.”
Pope FrancisMay 05, 2021