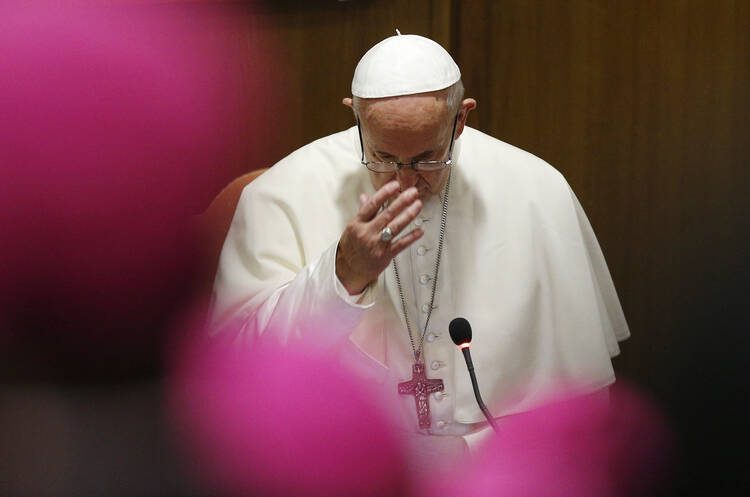 Pope Francis prays at the opening session of the Synod of Bishops on young people, the faith and vocational discernment at the Vatican Oct 3. (CNS photo/Paul Haring)

This week on Inside the Vatican, we will fill you in on Cardinal Muller’s recent manifesto, along with updates on the McCarrick case, preparations for next week’s summit on sexual abuse and information on a bombshell book that threatens to overshadow that summit.

In the Closet of the Vatican: Power, Homosexuality, Hypocrisy is a salacious new 571-page book that is expected to be released on the first day of the Vatican’s summit on sexual abuse and the protection of minors. It is by a French journalist, Frederic Martel, who claims that he has interviewed hundreds of sources in and around the Vatican to reveal which Vatican officials are gay and have active sex lives, and are doing scandalous things like hiring male prostitutes.

The release of the book on the first day of the sexual abuse summit threatens to conflate the issue of gay priests with that of the abuse of children. So this week, we will look at the ethics of writing a book like this, as well as the intentions behind it.

The abuse of children is extremely reprehensible but mainly in the past. I am sure some of it is still going on but it mostly contained.
The issue now is not abuse but what to do with those who knew something and facilitated those who abused. Many are still around
The third thing of concern is being buried by this conference is the abuse of the vows of chastity by religious. The implications are bishops were made and promoted because of this?

One could argue that since openness and transparency are not qualities that we associate with the Roman Catholic Church hierarchy, the anecdotal style of the book may be as close to the truth as we will ever get. Secondly, the fact that the author identifies as gay and nonbeliever, does not discredit him at all, and may in fact, give his book more credibility.
I suppose time will tell.