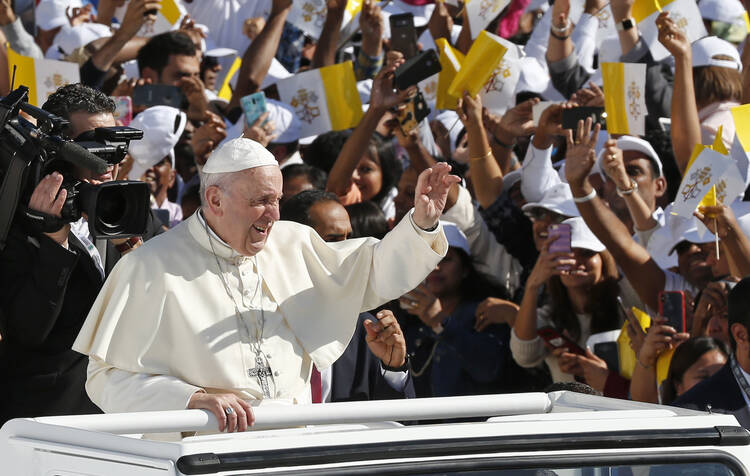 Pope Francis made history this morning when he celebrated Mass for more than 135,000 Catholics from many nations and cultures at the Zayed Sports stadium in Abu Dhabi in the United Arab Emirates.

It was the largest Christian act of worship ever celebrated on the Arabian Peninsula, in the heartland of the Muslim world, and the festive occasion gave powerful expression to the joy of the Gospel. Almost everyone had a small yellow and white Vatican flag, which they waved energetically.

There were scenes of joy and excitement as Pope Francis was driven in a jeep around the stadium before Mass to greet these Catholics, migrant workers from India, the Philippines, Uganda and many other countries of Asia and Africa, as well as expatriates from Western countries. They cheered, sang, chanted and applauded enthusiastically as they waited for the pope to arrive.

Francis also appears to be greatly admired in the Muslim world and especially here in the United Arab Emirates. The country’s minister for tolerance and other authorities of the U.A.E. attended the celebration together with 4,000 Muslims.

The presence of the minister and so many Muslims at the Mass sent a powerful message of tolerance to the inhabitants of this peninsula and to Muslims and Christians across the world. It was also a strong repudiation of some who seek to ignite the clash of civilizations and foment hostility between Christians and Muslims for political ends.

All this followed on the breaking news last evening that the crown prince has given the gift of land for the building of a church and a mosque side by side in memory of these historic days, and Pope Francis and the grand imam of Al-Azhar blessed in their respective ways the foundation stones of the church and the mosque, something that would have been unthinkable hitherto.

In his homily from the light and modern podium at which he celebrated the Mass, under the blazing sun, Pope Francis, himself the son of Italian migrants in Argentina, expressed his love for his “migrant flock.” The Catholic Church believes there are some one million Catholics in the U.A.E. Most are Filipino and Indian, many of whom have left behind families for work and can face precarious labor conditions, which human rights groups regularly denounce.

It was the largest Christian act of worship ever celebrated on the Arabian Peninsula.

The pope praised them for their faithfulness to Jesus in the face of these difficult circumstances, and told them, “I have come to say thank you for the way in which you live the Gospel we heard.”

“You who are here know the Gospel’s tune and you follow its rhythm with enthusiasm,” he said. “You are a choir composed of numerous nations, languages and rites; a diversity that the Holy Spirit loves and wants to harmonize ever more, in order to make a symphony.” Indeed, he said, “this joyful polyphony of faith is a witness that you give everyone and that builds up the church.”

“I ask for you the grace to preserve peace, unity, to take care of each other, with that beautiful fraternity in which there are no first- or second-class Christians.”

On this historic occasion that put on display the catholicity of the migrant church, Pope Francis concelebrated Mass not only with the apostolic vicar for the southern Arabian Peninsula, Bishop Paul Hinder, but also with church leaders from other countries, including Cardinals Pietro Parolin and Leonardo Sandri from the Vatican; Cardinals Joseph Coutts from Pakistan and Bechara Boutros Rai from the Lebanon; Archbishop Pierbattista Piazaballa from the Latin Patriarchate of Jerusalem; and the priests, most of them Franciscans, who serve it.

He celebrated the Mass “for peace and justice” in English and Latin. The Scripture readings were done in Arabic and English, and prayers were said in Korean, Konkano (India), Tagalog, Urdu, Malayalam and French. Pope Francis delivered his homily in Italian, and it was translated into English and Arabic.

The pope told the members of this migrant but dynamic church, in which lay people play a major role, that “if you are with Jesus, if you love to listen to his word as the disciples of that time did, if you try to live out this word every day, then you are blessed.”

Recognizing the reality of the lives of these migrant believers, Francis said: “It is most certainly not easy for you to live far from home, missing the affection of your loved ones and perhaps also feeling uncertainty about the future. But the Lord is faithful and does not abandon his people.

“It can happen that, when faced with fresh sorrow or a difficult period, we think we are alone, even after all the time we have spent with the Lord,” the pope said. “But in those moments, where he might not intervene immediately, he walks at our side. And if we continue to go forward, he will open up a new way for us; for the Lord specializes in doing new things; he can even open paths in the desert.”

Drawing on the Gospel of the day, Francis urged these migrant faithful to take the Beatitudes as their “roadmap for life.” He suggested that they consider “blessed are the meek.”

“Those who attack or overpower others are not blessed,” he said, “but rather those that uphold Jesus’ way of acting, he who saved us and who was meek even toward his accusers.” He recalled that St. Francis gave his brothers instructions about approaching the Saracens and non-Christians and told them “not to get into arguments or disagreements but be subject to every human creature out of love for God and let them profess that they are Christians” and “set out armed only with their humble faith and concrete love.”

Next, Francis focused on the beatitude “Blessed are the peacemakers” and told them, “The Christian promotes peace, starting with the community where he or she lives.”

He appealed to these migrant believers, “I ask for you the grace to preserve peace, unity, to take care of each other, with that beautiful fraternity in which there are no first- or second-class Christians.”

He concluded his homily with a prayer for them, saying: “May Jesus, who calls you blessed, give you the grace to go forward without becoming discouraged, abounding in love ‘to one another and to all’ (1 Thes 3:12).”

At the end of the celebration, Bishop Hinder thanked the pope for showing “your pastoral care for this church composed by migrants coming from around the whole world.” He told him: “You have come to us as Simon Peter who received from the risen Lord the order to strengthen the faith of his brothers and sisters. We assure you of our prayer and renew our loyalty to the successor of St. Peter.”

He said, “In a similar way you have come to a Muslim country with the intention to do as St. Francis did in the year 1219.”

He told the pope, “We Christians try to implement the order St. Francis gave at his time to his brothers and to ‘live spiritually among the Muslims...not to engage in arguments and [simply] to acknowledge that [we] are Christians.’”

Bishop Hinder concluded by asking Pope Francis “at the end of a historic moment” to give them his blessing, wishing him “a safe trip back to Rome,” drawing tremendous applause from the faithful.

Pope Francis embraced him and then blessed these believers to whom he had brought immense joy by his visit.

After Mass, Francis drove to the Abu Dhabi international airport to return to Rome, at the end of a visit in which this missionary pope not only wrote a new, positive and very important page in the history of Christian-Muslim relations but also in the history of church.

The gift of land is a generous offer and hopefully, a sign of rapprochement between Christianity and Islam in the region. Pray for peace.

God bless UAE, the land and its people with peace and unity.