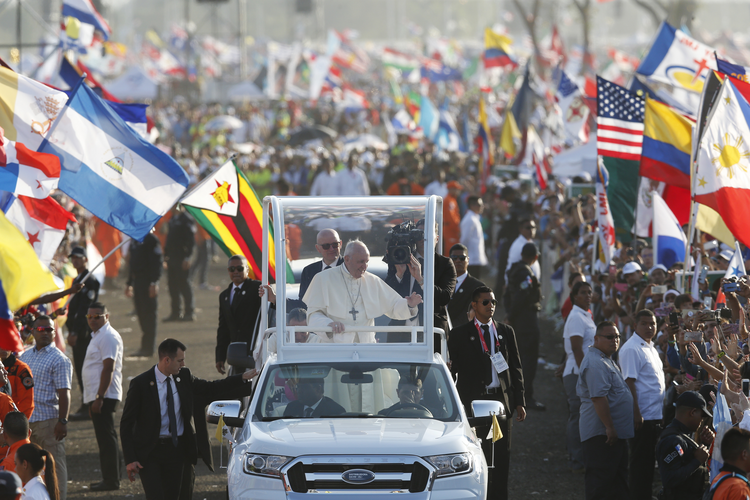 Pope Francis issued a powerful “wake up” call to hundreds of thousands of young people from 155 countries, in his homily at the closing mass of World Youth Day in Panama on Sunday, Jan. 27.

He told them, “Dear young people, you are not the future but the now of God and he invites you and calls you in your communities and cities to go out and find your grandparents and elders; to stand up and with them to speak out and realize the dream that the Lord has dreamed for you.”

He urged these young people from all continents, as they waved the flags of their home countries, to “realize that you have a mission and fall in love; that will decide everything,” as Father Pedro Arrupe, former Father General of the Jesuits, once said.

Francis reminded the young, “we may possess everything, but if we lack the passion of love, we will have nothing.” He appealed to them, “Let us allow the Lord to make us fall in love!”

The vast majority of young people had slept in tents or sleeping bags in the extensive Metro Park overnight, after attending last evening’s prayer vigil with the pope. At six o’clock this morning, they received a stirring wake-up call over the public address system, to the sounds of drums and music. But that was nothing compared to the wake-up that Pope Francis issued to them in the presence of the presidents of Panama, Costa Rica, Colombia, Guatemala, Honduras, El Salvador, and Portugal.

Last evening’s vigil of prayer and today’s mass were enriched by the presence near the altar of the blood-stained shirt that Archbishop Óscar Romero was wearing when he was shot while celebrating mass, and his episcopal mitre on which was emblazoned the words “to think with the church.”

Also, at the side of the altar stood the pilgrim statue of Our Lady of Fatima which had been brought here from Portugal. Cardinal Kevin Farrell, President of the Vatican’s Dicastery for the Laity, the Family, and Life, which is co-organizer of the W.Y.D. along with the local church, announced that the next World Youth Day will be held in Portugal. He did not give an exact date, but it is widely expected to be held in 2022.

In his homily at the festive Eucharistic celebration, which was concelebrated by 450 cardinals and bishops from many countries including the United States, and 4,000 priests, Francis told them that Jesus was inviting each one present to join him in his “mission” today, not tomorrow. He did so by drawing on the Gospel of the day which tells how, as a young man, Jesus began his public ministry when he went into the synagogue in Nazareth and stood up “and put into action God’s dream” by “proclaiming good news to the poor… bringing liberty to captives and recovering of sight to the blind, setting at liberty those who are oppressed, announcing the year of the Lord’s favor” (Luke 4.20-21). Pope Francis explained that “Jesus reveals the now of God,  who comes to meet us and to call us to take part” in this same mission today.

Pope Francis explained that “the now of God” becomes present with Jesus. “It is a merciful love that does not wait for ideal or perfect situations to show itself, nor does it accept excuses for its appearance,” the pope said. He continued, “It is God’s time that makes every situation and place both right and proper. In Jesus, the promised future begins and becomes life.”

Francis warned the youth against thinking that “your mission, your vocation, even your life itself, is a promise far off in the future, having nothing to do with the present. As if being young were a kind of waiting room, where we sit around until we are called.”

Seeking to wake them up to God’s call, Francis, wearing green vestments, told them “we do not always believe that God can be that concrete and commonplace, that close and real, and much less that he can become so present and work through somebody like a neighbor, a friend, a relative.”

Indeed, he said, “we do not always believe that the Lord can invite us to work and soil our hands with him in his Kingdom in that simple and blunt a way.” He recalled that Benedict XVI had put in well in Sept. 2005 when he declared that it is hard to accept that “God’s love can become concrete and can almost be experienced in history with all its painful and glorious vicissitudes.”

Francis remarked that like Jesus’ neighbors in Nazareth “we too prefer a distant God: nice, good, generous but far-off, a God who does not inconvenience us. Because a close and everyday God, a friend and brother, demands that we be concerned with our surroundings, everyday affairs and above all fraternity.”

He reminded them, however, that “God chose not to reveal himself as an angel or in some spectacular way, but to give us a face that is fraternal and friendly, concrete and familiar. God is real because love is real; God is concrete because love is concrete.” Indeed, as Benedict XVI said, “this concrete manifestation of love is one of the essential elements in the life of Christians.”

Francis warned the youth against thinking that “your mission, your vocation, even your life itself, is a promise far off in the future, having nothing to do with the present. As if being young were a kind of waiting room, where we sit around until we are called.”

He advised them against inventing “a hygienically sealed future, without consequences, where everything is safe, secure and ‘well insured’; a ‘make-believe’ happiness” that allows them “to think, that your now has not yet come, that you are too young to be involved in dreaming about and working for the future.”

He recalled that last October’s Synod on Young People had called for “intergenerational dialogue, the enrichment of exchange and the value of realizing that we need one another” and insisted “that we have to work to create channels and spaces that encourage dreaming of and working for tomorrow, starting today” and to do this “not in isolation, but rather side by side, creating a common space. A space that is not simply taken for granted, or won in a lottery, but a space for which you too must fight.”

Francis told the young crowd, “Jesus wants to enter into and win over our hearts. He wants to be our treasure, because he is not a “meantime,”  an interval in life or a passing fad; he is generous love that invites us to entrust ourselves.” Indeed, he said, “Jesus is concrete, close, real love. He is festive joy, born of opting for and taking part in the miraculous draught of hope and charity, solidarity and fraternity, despite the paralyzed and paralyzing gaze born of fear and exclusion, speculation and manipulation. “

Addressing them directly as ‘brothers and sisters,’  Francis declared, “the Lord and his mission are not a ‘meantime’ in our life, something temporary; they are our life!”

He urged them to follow the example of Mary, the mother of Jesus, “who not only believed in God and in his promises as something possible, she believed God himself and dared to say ‘yes’ to taking part in this now of the Lord. She felt she had a mission; she fell in love and that decided everything.”

He concluded by repeating that Jesus was inviting them “to live out your love in a practical way” and, he said, if they responded to his call with their ‘yes’ then this “may be the gateway for the Holy Spirit to give us a new Pentecost for the world and for the Church.”

Addressing them directly as ‘brothers and sisters,’  Francis declared, “the Lord and his mission are not a ‘meantime’ in our life, something temporary; they are our life!”

Francis then went on with the festive celebration, protected from the sun under a great canopy, as the more than one hundred-strong choir led the singing, and prayers were said in the different languages.

At the conclusion of the joyful celebration, Francis thanked God “for having given us the opportunity to share these days together and to experience once more this World Youth Day.”  He also thanked Panama’s president, Juan Carlos Varela Rodríguez, and the presidents of the  other nations present. He thanked especially the Archbishop of Panama, José Domingo Ulloa Mendieta, for his “generosity and hard work” in hosting this World Youth Day, and the bishops of neighboring countries and their communities for providing accommodation and assistance for this great event.

Pope Francis then concluded the celebration by thanking the young people and entrusting them to the protection of Our Lady, and asking them to pray for him.

After mass, Pope Francis drove to the nearby Casa Hogar El Buen Samaritano Juan Díaz, built in 2005 by the local church to provide assistance to young people and adults affected by AIDS who are deprived of familial and economic assistance.

Once he had greeted and spoken to them, Francis drove back to the nunciature for lunch. Later in the afternoon he will go to a stadium to thank the thousands of volunteers from many countries who had worked to make the W.Y.D. such a success.

Futile pursuit of change is for the socialist, the malcontent, the immature but the work of salvation is fulfilled; the entire work of the redeemer is done and complete.
For more than 2000 years human beings, young and old, male and female, have plumbed the depths of the mysteries and there have always been rebels who invented the same heresies time after time.

I am pleased to search for the idolatry of youth in his words, and find it absent. Young people are still ignorant, inexperienced and immature and need the steadying hands of the older adults. The Christ child has been conceived, and born and grown to maturity and fulfilled the will of His Father completely. We are NOT waiting for another Messiah. It is accomplished.

Now, we await the culmination of history and presumably there are still some accomplishments planned and willed by Our Father for us, the people of God, to fulfil before the Lord returns in all his Glory.

Faith is taking the first step even when you don’t see the whole staircase.
http://superior-essay-paper.com/5-page-essay/

When you have faith in yourself you don’t need others to believe in you
http://superior-essay-paper.com/500-word-essay/