For World Youth Day pilgrims, the pope’s presence is a source of inspiration 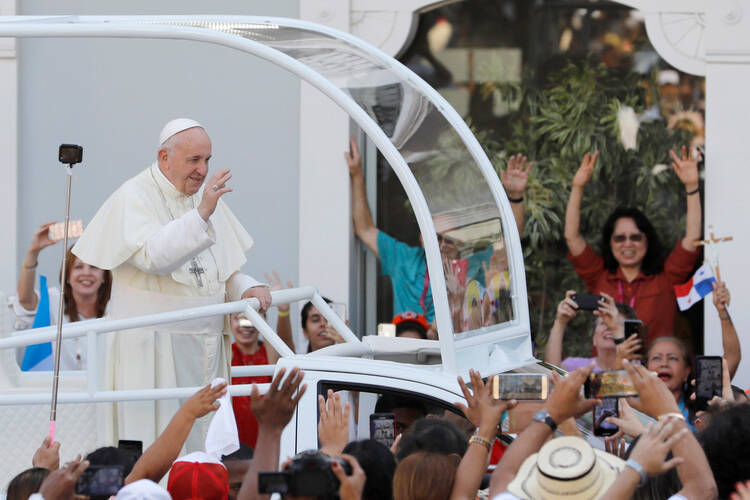 Pope Francis waves at World Youth Day pilgrims as he arrives for Mass and the dedication of the altar of the Cathedral Basilica of Santa Maria la Antigua in Panama City Jan. 26, 2019. (CNS photo/Carlos Jasso, Reuters)

The international World Youth Days are a most extraordinary event in the life of the Catholic church. As many research studies show, they produce much good fruit in countries across the globe and especially in the lives of the millions of individuals, young and old, who participate in them. These days in Panama have brought together an estimated 150,000 young people (whose ages range from 11 to 30, and some even older) from 155 countries and around 450 bishops.

In his opening talk to the W.Y.D. on Jan 24., Pope Francis recalled that when in Krakow (at the last W.Y.D.) he was asked if he would be in Panama, he responded, “I don’t know if I will be there, but for certain Peter will.“ But, he added, “today, Peter is here!”

For all those who America interviewed, the presence of the pope was something of the utmost importance, an invaluable gift, and a source of immense inspiration and affirmation of their faith.

“Pope Francis makes us feel that God is very approachable, loving and merciful and this means so much to us. We feel Christ’s presence in him,” Nga “Mimosa” Dinh, a Vietnamese Catholic from San Jose, California, told America at the World Youth Day gathering in Panama on Jan. 26.

She is a chief of staff in one sector of Apple’s operations and brought a group of 21 young Vietnamese Catholics from San Jose to W.Y.D.; among them, the youngest (her son, Minh) is 11 years old and the oldest (her husband) is 42. “Francis is a man of God. We pray that he can overcome all the challenges he is facing and lead us to God,” she said.

“Pope Francis makes us feel that God is very approachable, loving and merciful and this means so much to us. We feel Christ’s presence in him."

Her husband, Minh Phan, said “it’s a wonderful experience for the young people, and for us too, to be here and to experience and share our faith with people from the rest of the world.” He’s full of admiration for Pope Francis and remarked, “He’s very courageous, and he stands strong in the midst of the turmoil and provides guidance to believers. We pray that he remains for a long time with us as pope.”

Tri-An Pham, her 13-year-old son, told America, “We’re here to make our Catholic faith stronger, and to meet and share with young Catholics from other cultures.” He loves Pope Francis “because he is humble and always helping others, and he influences and provides guidance to so many people in the world.”

The young Vietnamese American Catholics were among some 8,000 youth from the United States at the W.Y.D. Comments similar to theirs came from a group from the church of Our Lady of Guadalupe in Chicago, led by their pastor, Father Hector Naval. One of them, David Ruiz, from George Washington High School, said he had come “to strengthen my relation with God and with other young people from across the world, and to understand the spirit of the next generation of the Catholic church.“ His friend, Gustavo Campos, from St. Lawrence O’Toole High School, agreed and added, “here I feel our base is universal, and I see young people filled with the spirit.”

Referring to the pope, Jonathan Vazquez, a youth group coordinator from the same church in Chicago, told America, “I think Pope Francis is what the church needs today. He’s a man of his time, even ahead of his time. He connects with young people in a way that many of our other leaders are not able to do. He listens to young people. He clearly loves us, and is so inspiring.”

Their jovial pastor, Father Naval, 45, told America, “I trust in the youth, they are the future of our society and of our church. I trust in them and believe they can make a difference in the world and especially in the situation where we find ourselves right now. Coming here helps them strengthen their faith, and mine too!“ As for the pope, he said, “Francis is a happy man. We all see this. He inspires us to live well, to live the Gospel in action in our local situation.”

Among the 3,500 young people from nearby Colombia, which used to be part of the country with Panama, there were two young women, university students in their early twenties: Maria Jose Sotero from Cartagena, who is studying commerce, and Maria Paula Cardenas who is a medical student.

Pope Francis is "an icon of the love of God for us. He’s the reason that many young people are getting in touch again with the church, because he thinks in a different way and he connects with us."

Maria Jose told America that she had come to the W.Y.D. because she “would like to reunite with God, because there was a period in my life when I was separated from him. I came to see what my vocation is and what plans God has for me, and I discovered this yesterday here at mass.”

Speaking of the pope, she said, “Francis is a messenger of the love of God. We see God in Jesus through him. I think he should have become pope years ago. He has changed the church for good.”

Her friend, Maria Paula, who was also distant from the church said Pope Francis has attracted her back. “He’s a great person. He’s an icon of the love of God for us. He’s the reason that many young people are getting in touch again with the church, because he thinks in a different way and he connects with us. Because of him, I have come here. I wanted to get in touch with young people who believe in God, and I want to get in contact with the church again.”

From the other side of the world, 700 young people came to W.Y.D. from Australia, along with some of their bishops. One of them, Lachlan Moses from a Marist school of Parramatta Marist School in Sydney, Australia, told America that he came “to enhance my spiritual convictions, to strengthen my faith because we are living in a more secular society today. As a young Australian, I came here because I wanted to come in contact with other young people from different parts of the world who have faith.” He’s very happy that Pope Francis has come here and is spending time with young people. “I think he is a very significant figure in the world today, and a very good leader for the Catholic church.”

A Filipino couple, members of the Neocatechumenal Way, Napoleon and Joy Virginia Omega, came from the island of Tacloban and are “survivors” of the super-typhoon which wreaked havoc in their island and where Pope Francis visited in 2015. They came here with their 27-year-old son, Pierre, who is a nurse, to pray with the pope. Mrs. Omega told America, “I was so touched by his homily when he said mass in our island and told us “your loved ones, and your homes are gone (in the typhoon), but you are not alone, God never abandons you, He will never let you down.” She added, “Pope Francis is love, he’s the representative of Jesus Christ and of Peter. He inspires us and he speaks the truth, and he came to spend time with us in our suffering. For all this, we have come here.”

Cardinal Blase Cupich from Chicago was one of several American bishops present in Panama, and gave a catechesis on Friday morning at the parish of Perpetuo Soccoro to hundreds of young people, including many from developing countries. Later he told America that in his interaction with them he found that “there really is anxiety about the future because they see so many things that diminish their possibilities, such as issues related to the environment, the economy and immigration, and this was especially true of those coming from third world countries.”

But, he said many told him that, “to hear Pope Francis gives them a real sense of hope.”