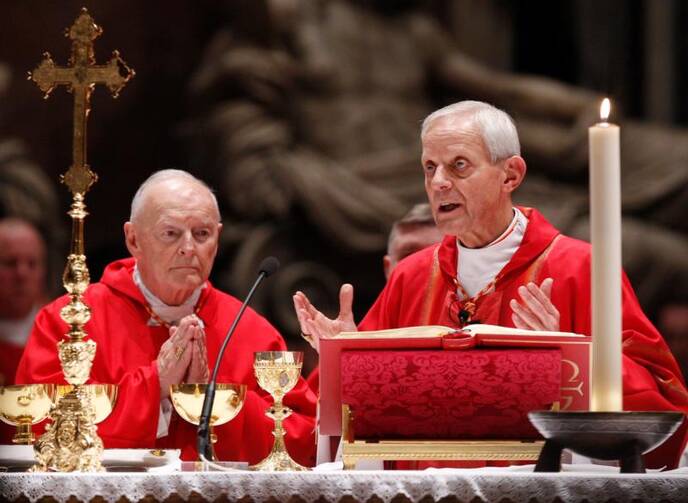 In this 2010 file photo, Cardinal Donald W. Wuerl, now retired archbishop of Washington, concelebrates Mass in St. Peter's Basilica at the Vatican with then-Cardinal Theodore E. McCarrick. Now-Archbishop McCarrick was removed from ministry last year after abuse allegations against him came to light. He resigned from the College of Cardinals last June and now resides at a Kansas friary awaiting a Vatican trial. (CNS photo/Paul Haring)

WASHINGTON (CNS) -- In a second letter issued in mid-January about what he knew and didn't regarding abuse allegations involving his predecessor, Cardinal Donald W. Wuerl, Washington's retired archbishop, apologized Jan. 15 for what he called a "lapse of memory," clarifying that he knew of at least one abuse allegation against former U.S. Cardinal Theodore E. McCarrick, but he had "forgotten" about it.

In the letter sent to priests of the Archdiocese of Washington, Cardinal Wuerl acknowledged that he became aware of the allegation against now-Archbishop McCarrick after receiving a report in 2004 about a different allegation, but the "survivor also indicated that he had observed and experienced 'inappropriate conduct' by then-Bishop McCarrick."

The former cardinal is now an archbishop, having stepped down from the College of Cardinals in July 2018 following accusations that he abused minors in the past. Other accusations followed about inappropriate behavior with seminarians. He has denied the accusations, but the Vatican is reportedly considering whether to laicize him. He now is living in a Capuchin Franciscan friary in Kansas.

Cardinal Wuerl acknowledged that he became aware of the allegation against now-Archbishop McCarrick after receiving a report in 2004 about a different allegation, but the "survivor also indicated that he had observed and experienced 'inappropriate conduct' by then-Bishop McCarrick."

Cardinal Wuerl was bishop of the Diocese of Pittsburgh in 2004 and he said in the Jan. 15 letter that back then, he received a report from the Pittsburgh Diocesan Review Board, which reviews allegations of abuse, about a separate case and "at the conclusion of this report, the survivor indicated the 'inappropriate conduct'" he observed by McCarrick.

Previously, Cardinal Wuerl had said in a Jan. 12 letter that when "the allegation of sexual abuse of a minor was brought against Archbishop McCarrick, I stated publicly that I was never aware of any such allegation or rumors." But the context, he said, was in discussions about sexual abuse of minors, not adults. He said in the Jan. 15 letter that the survivor in the Pittsburgh case had asked that the matter be kept confidential, he heard no more about it, "I did not avert to it again," and "only afterwards was I reminded of the 14-year-old accusation of inappropriate conduct which, by that time, I had forgotten."

The latest letter from the cardinal came after the person who had brought up the "inappropriate conduct" allegations in Pittsburgh spoke with The Washington Post newspaper in mid-January to say that Cardinal Wuerl, indeed, knew about the concerns he had then voiced.

Cardinal Wuerl, in the latest letter, said he apologized to this survivor "for any of the pain and suffering he endured" during the abuse he suffered, and also "from the actions of then-Bishop McCarrick."

He also said "it is important for me to accept personal responsibility and apologize for this lapse of memory. There was never the intention to provide false information."

Cardinal Wuerl has been under fire since an August 2018 report from a grand jury in Pennsylvania that painted a mixed record during his time as bishop of the Diocese of Pittsburgh as it pertained to handling abuse cases. The report has recently been under scrutiny, however, and since then there have been calls for the cardinal to step down from his current post.

Now 78, he had submitted his resignation to the Pope Francis when he turned 75, as required by canon law. The pope accepted it last fall and named Cardinal Wuerl as apostolic administrator of the Archdiocese of Washington; he' ll remain in the post until a successor is named.

Sadly, whether he is being truthful or not, he is simply not believable. We are done with the PR damage control mentality over all else that so many of the Archdioceses rely on. When will they start living a simple life, among their people? Maybe then they will figure out they are not royalty, they are servants of God, and the faithful have had enough! Now, all the good ones get mixed with the bad, for we no longer know which ones even believe!

I used to be pro-Wuerl, but it is incredible to believe that he forgot such a revelation. He lied.

If he can forget that, it would confirm how wide spread the problem is because we forget insignificant things, NOT major ones! So very disheartening when we really don't know who to trust. I liked him too.

Says it all doesn't it. Abuse accusations were so important, he forgot them!

Does anyone believe him? You can't forget those things, and if he did, his brain is dead. Get rid of him.

I used to listen to this guy's tapes. So...someone who can remember minutia of Roman Catholic doctrines "forgot" about an abuse allegation? If he can forget that, just think how many little picky rules he could forget...if he tried.

AB Wuerl is not a villain, not an abuser, not complicit in another’s abusing, not negligent in dismissing an abuser when it was in his power to do so, and not afraid to stand up to Rome when Rome countenanced this abuser (thus making it tougher on Wuerl to throw the guy out). He is not squeaky clean; in the context of a conversation about child abuse, Wuerl said that he was unaware of reports of such against McCarrick, thus forgetting that 14 years earlier he was told by an adult—who asked him to keep it a secret then—that earlier in this individual’s adult life the individual had witnessed inappropriate sexual behavior by McCarrick against another individual (who was not a minor). . . Weigh Wuerl in the balance, but be mindful that we will all be weighed in the balance—re what we do, fail to do, and write in comment spaces.

John- maybe I am missing something here, but it is Cardinal Wuerl who has said he forgot, and to many of us, that means either he is simply not telling the truth, or the event was not important enough to remember, which can ONLY translate to lacking genuine empathy. The fact this victim might have been 25 years old, and not 12 years old does not mean it shouldn't have been disturbing, unless of course, it is happening on a regular basis, which is disturbing in itself. As a close relative of a post 2004 abuse victim, I can tell you that the manipulation and betrayal by the priest has been deeply upsetting, and traumatizing, but to learn how the archdiocese in the case handled information over the past 20 years is so disturbing it has shaken my world. The indifference shown, and the cowardly behaviour by some taints all, that's how it is. I did not pre judge Cardinal Wuerl, and I did not feel at the time he was treated fairly when he was 'pushed' out. I still believe that. Nonetheless, through his words alone, I see a pattern of indifference towards what should be considered deeply disturbing behaviour within our church. We expect and demand better.

Yes, John, we will all be weighed in the balance. I recall that Jesus, himself, experienced “righteous anger,” and then he acted, in the Temple, no less! Can we do any less? Cardinal Weurl diminishes himself when he claims memory loss of such an important revelation. So sad....

The standards being applied now are far different than what society deemed acceptable a generation ago. Even some survivors of abuse still refuse to come forward publicly, the reasons for which are so varied but in one sense consistent with an attitude that existed a generation ago. Silence prevailed, everywhere.

I found Wuerl’s comment in his letter disingenuous because splitting hairs about the age of the abused is NOW considered wholly inappropriate. But that is only a recent development because, previously, sexual relations between apparently-consenting adults were not considered as seriously. The McCarrick adult cases are now recognized as the same violation of authority, position, power, and vows as the abuse of children. Wuerl’s apology, sincere as he might have meant it to be, demonstrates his own lack of recognition of the evolved current attitudes. That same lack of recognition was revealed today by the resignation of former Governor of Michigan Engler as interim president of the University of Michigan for statements that are out of sync with current expectations of the recognition of victimization in abuse crimes of any sort.