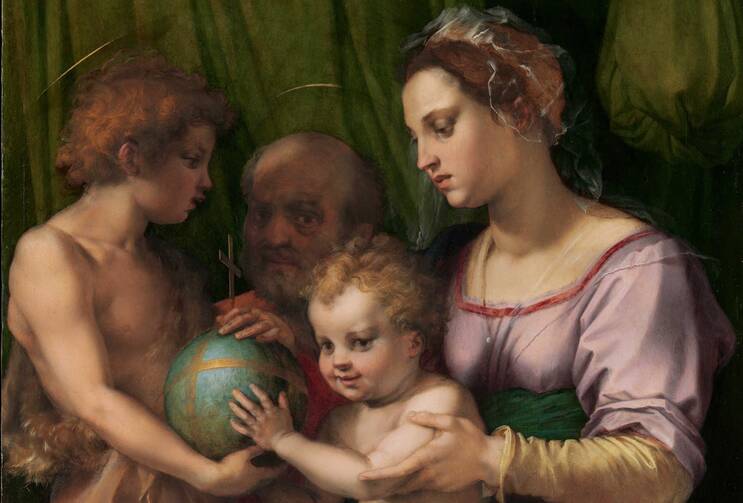 Did you ever wonder why Jesus was baptized? It’s something Christians don’t often think about. But, after all, the Gospels say that John the Baptist was preaching a baptism of repentance for sins. And what sins did Jesus have to repent of? Nothing. Now the event is definitely historical. How do we know? Well, the Gospel writers would have never invented a story that had Jesus seeming like he needed baptism or putting him in any sort of subordinate position to John. So New Testament scholars say that is 100% an historical event. One possible explanation of why Jesus chose to be baptized is that he meant it as a sign that he was on board with John’s larger mission. He wanted to take his place with the rest of the Jewish people who were following John at the time. In that way, it’s really a radical act of humility on Jesus’s part. Imagine him standing in line waiting to be baptized with everyone else. And it’s another indication of how much God wanted to be with us. At the baptism God stood in line. So how are you called to align yourself with the men, women and children of your time? How are you called to stand with them? Maybe this week you can think of ways of how to stand in solidarity with your brothers and sisters, like Jesus did at the Baptism, especially those who are poor or in any way marginalized.

When he knew for certain
That only drowning men could see him
He said, “All men shall be sailors
Until the sea shall free them”

But he himself was broken
Long before the sky did open
Forsaken, almost human
He sank beneath your wisdom
Like a Stone.

Long before the sky did open, Mr. Martin.

Repentence is about conversion, not justification. When John baptized there was no substitutions theory of salvation or original sin, whose roots are in the misogyny of hellenism. John had called out one among the the Pharisees was the messiah. (He had inside information.) Calling Jesus out marked the end of a life of the mind and the beginning of his sacrificial ministry where his entire life was the reverse of the micvah from purity to the shared sufferings of the people of God. It is the example Francis depends on when he insists the Church must take on the smell of the sheep.

“Forget your Perfect Offering. Everything is cracked. That’s how the Light gets in.” - Leonard Cohen