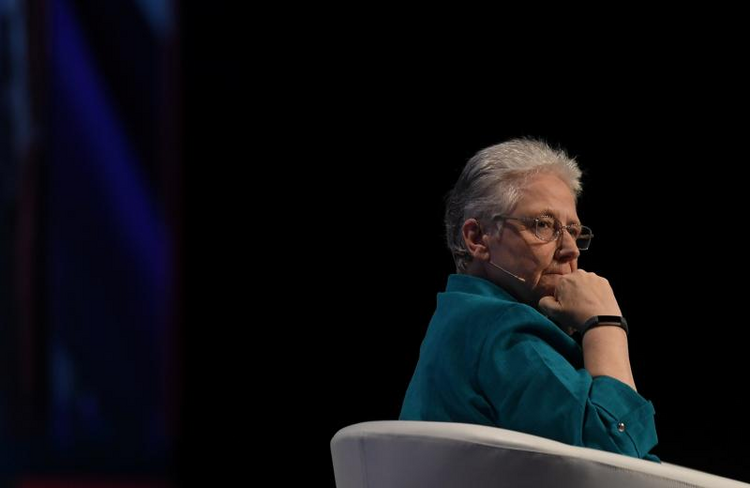 DUBLIN (CNS) -- A prominent survivor and advocate for those affected by clerical abuse has urged Pope Francis to publicly name bishops who have been found guilty of negligence by church tribunals.

Marie Collins -- who was a member of the Pontifical Commission for the Protection of Minors from 2014 to 2017 -- also said that, during the Vatican summit on safeguarding in February, the pope should set out comprehensive procedures to hold bishops accountable.

Speaking at a public talk in Dublin Jan. 14, Collins said the Vatican meeting -- which will include the presidents of the world's episcopal conferences as well as senior Vatican officials -- should prioritize making child safeguarding policies and procedures universal.

"The experience from those countries where the abuse crisis has been faced is not being used to bring universal policies into place for the countries where it has yet to occur," she told the meeting, organized by We Are Church Ireland.

"You can be sure there is abuse of minors in every country where the church has a presence, as it is in every society. Yet the sleeping mandarins in leadership in our church seem to feel if they turn a blind eye, it will stay hidden, and they will not have to deal with it," she said.

Collins, who met with Pope Francis during his trip to Ireland in August, said she believed that attempts to tackle abuse are being undermined because there is no clear universal agreement on what constitutes sexual abuse of a minor.

Collins, who met with Pope Francis during his trip to Ireland in August, said she believed that attempts to tackle abuse are being undermined because there is no clear universal agreement on what constitutes sexual abuse of a minor.

"The Vatican has not clearly set out what actually constitutes sexual abuse of a minor in the view of the official church," she said. "At the moment the vagueness of the canon law in regard to abuse often leads to canon law trials not being able to bring in a guilty verdict in cases where most people would see clearly abuse has occurred.

"If there is no consistent agreement across the church as to what is sexual abuse of a minor, then how can we have any hope of consistent handling of the issue?" she asked.

Collins also expressed the view that the term "zero tolerance" means different things to different people within the church. She said the Rome meeting should agree on a clear definition of the term "and commit to its implementation."

She said she believes "zero tolerance" of abuse needs to be added to canon law and that this should be agreed upon by the bishops' conferences.

"This would bring a consistency to the way sexual abuse of minors is dealt with no matter where in the world instead of the current ad hoc situation. ... Any episcopal conference leader who refuses to comply should be named and his explanation made public."

On the issue of accountability for bishops accused of not responding appropriately to claims of abuse, Collins said she believed that "the pope should make a clear statement at this meeting outlining what is the accountability process being used by the church to hold bishops accountable if accused of negligence, protection of abusers or cover-up. Who is investigating? Who are the judges? What are the penalties?"

"Pope Frances also told me there had been guilty verdicts against bishops and he had removed the offenders. ... He needs at this meeting to name those who have a guilty finding against them, what was the offense and what was their penalty.

"He also needs to commit to making these guilty verdicts public in the future," she said.

Collins said she is not optimistic that the meeting will achieve what she believes is necessary.

"My fear is that what will hear is that there has been a great deal of prayer, reflection, and 'fruitful discussion,'" she said.

"My fear is that what will hear is that there has been a great deal of prayer, reflection, and 'fruitful discussion,'" she said.

"We will be assured that things are moving forward and there will be promises for the future, But we will see little in the way of on-paper, concrete, committed action plans," she said.

Collins resigned from her post on the Pontifical Commission for the Protection of Minors in 2017, claiming she had experienced a lack of seriousness on the issue from Vatican officials. She told the Dublin meeting that she believes part of the reason the issue is not being handled better is because the Vatican is "dysfunctional."

"Some of the reason for this lies in the way the Vatican actually goes about its work. Clericalism is embedded in its fabric. It is inefficient, full of cumbersome bureaucracy, (with) jealousies between departments which leads to a lack of cooperation.

"I do not believe change will happen if we wait for it to come from inside. The laity have to keep speaking out strongly for the changes and not be diverted. The obvious need for the involvement of the laity, including women, at every level must happen if the church is to be brought into the 21st century with its people.

"Persistence and patience is what is needed; there are no quick fixes, but no change will come unless we work for it. The only alternative is to walk away and that is not the answer," she told the gathering.

Due to take place Feb. 21-24, the Vatican summit is the first time a global gathering of bishops called to discuss abuse in the church.

why isn't someone like Marie Collins invited to the February Summit?--at as an observer?--we can't have the Pope and the Bishops patting each other on the back for a "job well done"--or that would mean just more lack of accountability.