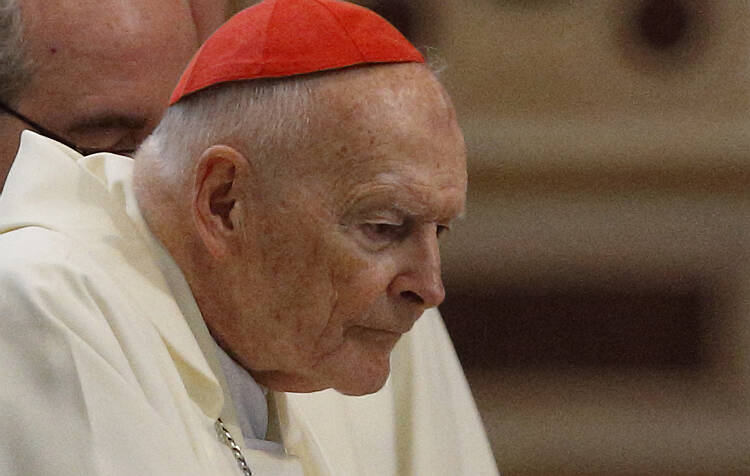 The key accuser in the sex abuse case against ex-Cardinal Theodore McCarrick has met with New York City prosecutors, evidence that the scandal that has convulsed the papacy is now part of the broader U.S. law enforcement investigation into sex abuse and cover-up in the Catholic Church.

The development is significant, given that the Vatican investigation against McCarrick has already created a credibility crisis for the Catholic hierarchy including Pope Francis, since it was apparently an open secret that McCarrick slept with adult seminarians. Grein’s testimony, however, includes allegations that McCarrick, a former family friend, also groomed and abused him starting when he was 11.

The Manhattan District Attorney’s office launched a hotline last year and invited victims to report even decades-old sex abuse, saying it would pursue “any and all investigative leads” to ensure justice.

Grein met with Sullivan before Christmas after filing a compensation claim with the New York City archdiocese alleging that McCarrick, the retired archbishop of Washington, first exposed himself when Grein was 11 and continued abusing him for some two decades, including during confession, Noaker said. The church’s compensation procedures require that victims notify the district attorney of their allegations, which Grein did on Nov. 1.

Noaker, however, said Grein’s testimony to Sullivan went beyond the required pro forma notification and covered issues related to a broader investigation.

On Dec. 27, Grein testified to Vatican investigators as part of the Holy See’s internal probe against McCarrick. That investigation has now finished and shifted to Rome, where a final verdict is expected within weeks, Vatican officials say.

McCarrick, who has also been accused by two other men in the Vatican investigation, faces possible defrocking if Francis determines the accusations against him are credible.

McCarrick, who has also been accused by two other men in the Vatican investigation, faces possible defrocking.

Criminal charges in New York City against McCarrick are unlikely for any actual abuse, due to the statute of limitations, Noaker said. But Grein’s testimony could still prove useful as prosecutors investigate patterns of abuse, conspiracy and cover-up over decades by Catholic leaders.

A law enforcement official familiar with the New York City investigation said it was separate from the one announced in September by then-New York State Attorney General Barbara Underwood, who subpoenaed all eight dioceses in New York state. The official spoke on condition of anonymity because he was not authorized to speak publicly about an ongoing investigation.

Underwood, who has since been replaced, took action along with prosecutors in a dozen U.S. states after a Pennsylvania grand jury alleged that more than 1,000 children were molested by 300 priests over 70 years in six dioceses of that state alone.

The state attorney general’s office is pursuing a civil investigation but has also reached out to local prosecutors authorized to convene grand juries or pursue criminal investigations.

Separately, the U.S. Justice Department has told every Catholic diocese in the country not to destroy documents or confidential archives relating to abuse investigations and the transfers of priests.

McCarrick was ordained a priest in New York City in 1958 and served as an auxiliary bishop to New York’s then-Cardinal Terence Cooke before being named bishop of Metuchen, New Jersey, in 1981. It was during his years as a New York City priest — in the early 1970s — that he allegedly groped a teenage altar boy in St. Patrick’s Cathedral. That accusation launched the internal church investigation.

After the New York City archdiocese found the accusation credible and announced that McCarrick had been removed from public ministry, Grein and former seminarians came forward to say that McCarrick molested them as well. Francis removed McCarrick as a cardinal in July.

McCarrick denied the initial groping allegation of the altar boy and has said, through his lawyer, that he looks forward to his right to due process.

A former priest from the Metuchen diocese, Robert Ciolek, has also publicly accused McCarrick of inappropriate behavior while he was a seminarian and formalized the accusation in a 2004 complaint to Pittsburgh church officials.

In the past week, the archdioceses of Pittsburgh and Washington confirmed that then-Pittsburgh Bishop Donald Wuerl forwarded the complaint to the Vatican embassy at the time — disproving Wuerl’s claim that he hadn’t heard of allegations against McCarrick until last year.

Francis recently accepted the resignation of now-Cardinal Wuerl as archbishop of Washington after his credibility suffered as a result of the McCarrick scandal and allegations about his tenure in Pittsburgh in the Pennsylvania grand jury report.

The human being, in his adult phase, has the capacity to process ideas, to express feelings and to filter or balance emotions. However, in the infant stage his body-mind unit is not yet developed since all his energy and functions are directed to complete his physical-organic development. It is mistakenly thought that children have ideas (that think) or that they manifest their own emotions. "But if you are able to observe children objectively, you can verify with certainty this reality: Children do not think, they are thought."

This is very easy to verify, it is enough to keep a "problematic" child (even a young person) away from their usual environment and provide an environment where ideas and experiences are expressed contrary to the "difficult" environment where they are being raised-educated. In a short time it will manifest an obvious change.Best Assignment Writing UK Services What children manifest as "ideas" are nothing more than programs of action acquired in a mimetic way. Impregnation of the emotional environment in which they are immersed and it is enough to change the environment so that the form of "expressing" the child changes. Children are good executors of the environment in which they are inserted precisely because they are not yet able to filter the emotional charge of each space. Simply MIMETIZAN.

Which makes them funny monkeys or little "imps" if the environment is saturated or full of negative emotions. To understand this process of mimetic / emotional reading, one must think of emotion as the CLIMATE that characterizes a given environment. As happens with the weather, adults have an immune system adapted to viruses and inclemency and also an education that allows us to choose the clothes and accessories that protect us from inclement weather. Children do not have either one or the other. And your body needs to be protected and isolated in a convenient way, while your immune system is strengthening.

"A strong immune system is the reflection of a solid personal identity." In relation to environments, there are a number of dangers that lie ahead of childhood and it is the responsibility of parents and educators to ensure the child's awareness so that keep pure and innocent, emotionally speaking. Another ideal mythical or archetypal image to outline the image of children is that of an angelfish or cherub. A being generically neutral (without sex) and "winged" (with feet off the ground).

This image clearly defines the basic needs of children in childhood time: a time to grow away from stereotyped images regarding sexual roles and away from earthly concerns. All immersion in these spaces, typical of adult life, clouds the child's development, makes him put his feet on the ground and slows his psycho-physical development. The child needs to grow away from charged or tense environments and parents and educators should facilitate (I think they are facilitators rather than educators) life. Make him smell, touch, listen, see, FEEL AND LIKE, that life is easy and beautiful ...

Growing with these premises your future will not be a problem.

For those who put their faith in the effectiveness of the Attorney Generals, the race is on: will the Vatican or the NY Attorney General get to punish McCarrick the first or the most. My bet is on the Vatican. Of course, I also bet the AG does absolutely nothing about the "everybody knew" collusion to keep silent on the coercive sexual advances on seminarians.