The Catholic Church has a leadership problem. Lay people can help.

The Catholic Church has a leadership problem. Lay people can help. 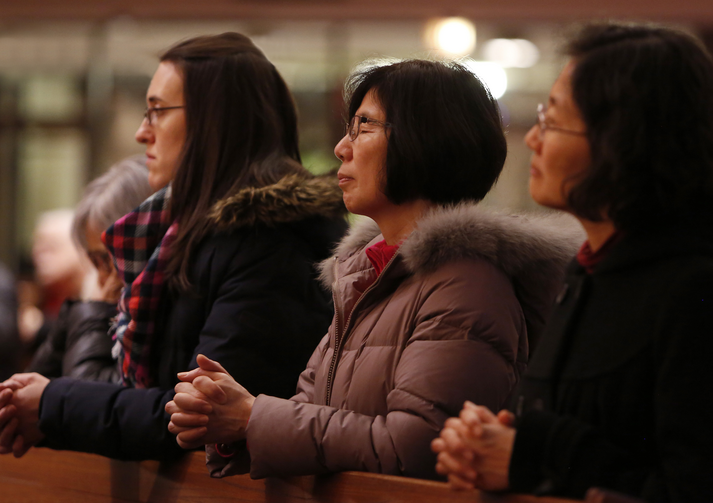 People pray after Communion Jan. 3 at St. Mother Theodore Guerin Parish in Elmwood Park, Ill. More than 70 turned out to support the U.S. bishops who are gathered at the Mundelein Seminary at the University of St. Mary of the Lake for a retreat to rebuild trust among the faithful as questions continue to revolve around their handling of clergy sex abuse. (CNS photo/Karen Callaway, Chicago Catholic)

The Catholic Church, according to this week’s guest, is facing not one but two crises. The first is the sexual abuse of children and its cover-up; the second is a complete break down of trust in church leadership. Kerry Alys Robinson has been working to confront both over a decade as the founding executive director of Leadership Roundtable, a group that brings together clergy, religious and laypeople to promote the best practices in the areas of finance, human resources and management.

We ask Kerry about the biggest obstacles to greater lay involvement in church governance, what concrete steps the bishops and laypeople can take to restore trust and protect children, and how women and mothers, in particular, can lead the way.

In Signs of the Times this week, we take a look at the religious make-up of the new Congress and discuss an update to the church’s teaching on hysterectomies. Plus: The U.S. bishops are on retreat to pray about the sex abuse crisis. Should they be doing something instead? And finally, a laywoman is picked to head a parish in New Haven—and the layman who has pretended to be a priest for 18 years is finally caught.

You can let us know what you think about our conversation with Kerry or any of our stories in our Facebook group. And thanks as always to our supporters on Patreon!

How many members of the new Congress are Catholic?
Jesuit priest remains House Chaplain in new Congress
Hysterectomy can be morally licit in limited situations, Vatican says
Why are the bishops praying about the abuse crisis instead of doing something about it?
Sex Abuse Crisis: What dioceses have released names (so far)?
Bishop Announces New Leadership Model At St. Anthony
Shocking: Man Caught Pretending to be a Catholic Priest After 18 Years, Here’s the Details

The alcoholic drink that’s even better for you than wine

I believe that ordinary Catholic laypeople, especially Catholic mothers, must be given a voice in the selection of their religious leaders. The bishops must be elected at the local level, not appointed. And women must be ordained. Democratic accountability must come to the Catholic Church.