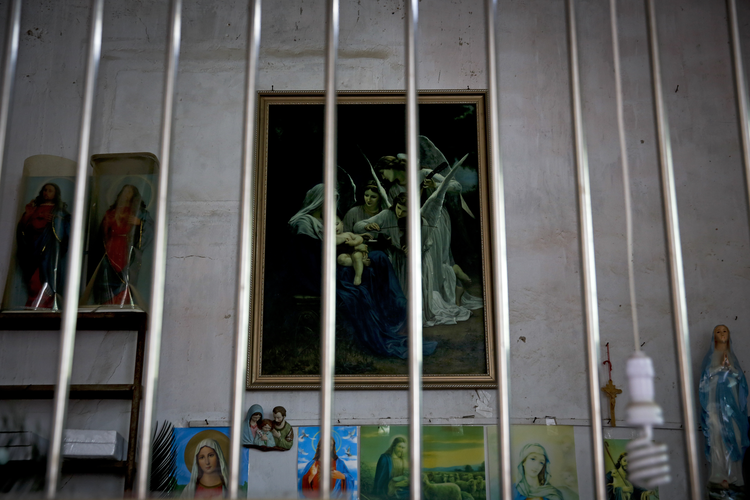 In this Tuesday, March 27, 2018, photo, Catholic religious paintings and figures are displayed behind bars at an underground Catholic church in Jiexi county in south China's Guangdong province.  (AP Photo/Andy Wong)

HONG KONG (AP) — In a move widely seen as kowtowing to Beijing, the Vatican appointed a retired China-friendly cardinal to head the Catholic Diocese of Hong Kong on Monday, effectively blocking the succession of the highest-ranking serving bishop known to be critical of the Chinese government.

Cardinal John Tong will serve as the church's interim administrator in the semi-autonomous Chinese territory of more than 500,000 Catholics, after Bishop Michael Yeung died on Thursday.

At a time when the Holy See is eager for rapprochement with Beijing, Yeung's natural successor, Bishop Joseph Ha, is widely seen as being too outspoken to be acceptable to China.

"Just like the Chinese Communist Church doesn't respect the rule of law, the Church has broken with convention," said Willy Lam, political analyst and adjunct professor at the Centre for China Studies, Chinese University of Hong Kong. "It's difficult to dispel the impression that the Vatican has succumbed to pressure from Beijing. With his past records of supporting democracy, Ha is not Beijing's favorite."

Cardinal Tong advocated for the reopening of China-Vatican dialogue.

Cardinal Tong, however, advocated for the reopening of China-Vatican dialogue.

In his annual speech on Monday, Pope Francis praised the provisional agreement between the Holy See and Beijing reached last September on bishop appointments, calling it the "result of a lengthy and thoughtful institutional dialogue."

In recent months, Chinese authorities have renewed their efforts in cracking down on unauthorized houses of worship.

At the Christmas Mass shortly before his death, Bishop Yeung called on his flock to pray for the persecuted underground Catholics in mainland China.

Some of the church's local leaders in Hong Kong, notably Ha and Tong's predecessor, Cardinal Zen, remain politically active moral forces who champion pro-democracy fights and other causes, both religious and secular. Beyond serving the flock, the diocese runs many grade schools and high schools that are popular with lay parents.

The 79-year-old Tong resigned as head of the diocese in 2017, as he passed the retirement age of 75.