Pope Francis reminds us to imitate the Magi, who put Jesus at the center 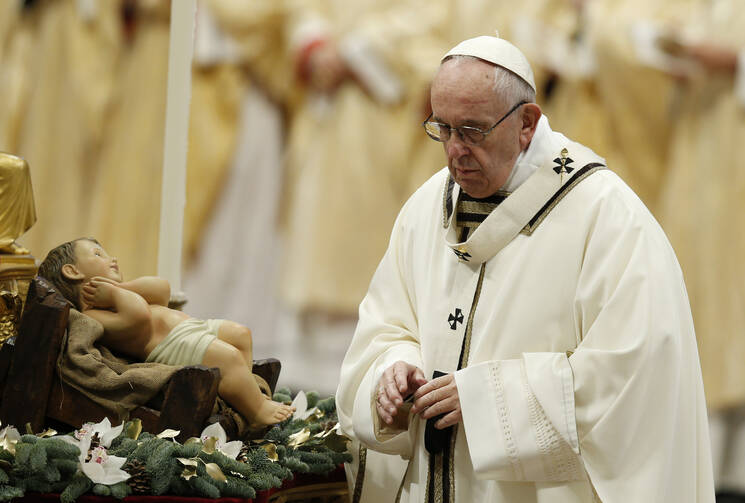 Pope Francis finishes venerating a figurine of the baby Jesus during Mass marking the feast of the Epiphany in St. Peter's Basilica at the Vatican Jan. 6. (CNS photo/Paul Haring)

“Our God makes himself known for everyone” but in a most “surprising way,” Pope Francis said in his homily at Mass in St. Peter’s Basilica on the feast of the Epiphany, Jan. 6. He recalled that today’s Gospel “speaks of a hum of activity around the palace of King Herod once Jesus appears as a king” but the Magi do not find the child who is born to be King “in the royal palace of Jerusalem, but in a humble abode in Bethlehem.”

Addressing a congregation of some 7000 people—including the ambassadors from some 180 countries accredited to the Holy See whom he will personally greet tomorrow—he explained that the word epiphany indicates “the manifestations of God” and recalled that today’s feast commemorates how God “makes himself known to all the nations” that are “represented by the Magi” who visited Jesus. He is “a God who has come for everyone,” he said; indeed, “every nation, language and people is welcomed and loved by him.”

How an Orthodox celebration, Greek tradition and a Bayou dive led to a revelation of faith
Sonja Livingston

Epiphany: Is there really no such thing as a free gift?
Terrance Klein

Unlike “the magnates” of our day, “God does not need the spotlights of the world to make himself known.” Pope Francis said. “It is always very tempting to confuse God’s light with the lights of the world” and “many times we have pursued the seductive lights of power and celebrity, convinced that we are rendering good service to the Gospel!” But by doing so, he said, “have we turned the spotlight on the wrong place, because God was not there. His kindly light shines forth in humble love.”

Then, in words that re-echoed his talk to the cardinals before the conclave of March 2013, and also reverberated in his message to the Chilean bishops in May 2018 and in his letter to the American bishops some days ago, Francis in his homily remarked, “How many times, too, have we, as a church, attempted to shine with our own light! Yet we are not the sun of humanity. We are the moon that, despite its shadows, reflects the true light, which is the Lord. He is the light of the world. Him, not us.”

He told the thousands gathered in St. Peter’s Basilica, “the light of God shines on those who receive it.”

He recalled that in the first reading at Mass today, the prophet Isaiah, “tells us that that light does not prevent the darkness and the thick clouds from covering the earth, but shines forth on those prepared to accept it: And so, the prophet addresses a challenging summons to everyone: “Arise, shine.”

Francis said, “We need to arise, to get up from our sedentary lives and prepare for a journey.”

Francis said, “We need to arise, to get up from our sedentary lives and prepare for a journey. Otherwise, we stand still, like the scribes that Herod consulted; they knew very well where the Messiah was born, but they did not move.”

He told them, “we also need to shine, to be clothed in God who is light,” but to do so “we must first put aside our pretentious robes. Otherwise, we will be like Herod, who preferred the earthly lights of success and power to the divine light.”

He reminded them that “the Magi, instead, fulfil the prophecy. They arise and shine and are clothed in light. They alone see the star in the heavens: not the scribes, nor Herod, nor any of the inhabitants of Jerusalem.”

Pope Francis said, “in order to find Jesus, we also need to take a different route, to follow a different path, his path, the path of humble love. And we have to persevere.”

He recalled that today’s Gospel tells us that the Magi, after encountering Jesus, left by a “different road from that of Herod. An alternative route than that of the world, like the road taken by those who surround Jesus at Christmas: Mary and Joseph, the shepherds.” For, he said, “only those who leave behind their worldly attachments and undertake a journey find the mystery of God.”

“Only those who leave behind their worldly attachments and undertake a journey find the mystery of God.”

Today, he told his global audience at the solemn sung Latin Mass, “we are asked to imitate the Magi. They do not debate; they set out. They do not stop to look, but enter the house of Jesus. They do not put themselves at the center, but bow down before the One who is the center. They do not remain glued to their plans, but are prepared to take other routes.” Indeed, “their actions reveal a close contact with the Lord, a radical openness to him, a total engagement with him.... Indeed, the Magi go to the Lord not to receive, but to give.”

Pope Francis suggested that believers should ask themselves this question today: “at Christmas did we bring gifts to Jesus for his party, or did we only exchange gifts among ourselves?” He told them, “if we went to the Lord empty-handed, today we can remedy that” because “the Gospel, in some sense, gives us a little ‘gift list’: gold, frankincense and myrrh.”

They do not debate; they set out. They do not stop to look, but enter the house of Jesus.

He explained the significance of these three gifts for the everyday life of believers. He said, “Gold, the most precious of metals, reminds us God has to be granted first place; he has to be worshiped. But to do that, we need to remove ourselves from the first place and to recognize our neediness, the fact that we are not self-sufficient.”

Next, he said, frankincense, “which symbolizes a relationship with the Lord, prayer, which like incense rises up to God. Just as incense must burn in order to yield its fragrance, so too, in prayer, we need to ‘burn’ a little of our time, to spend it with the Lord. Not just in words, but also by our actions.”

As for myrrh, he said, it is “the ointment that would be lovingly used to wrap the body of Jesus taken down from the cross.” He explained that “the Lord is pleased when we care for bodies racked by suffering, the flesh of the vulnerable, of those left behind, of those who can only receive without being able to give anything material in return.”

“The Lord is pleased when we care for bodies racked by suffering.”

He also made a heartfelt and pressing appeal to European leaders to show “concrete solidarity” to the 49 migrants, stranded in the Mediterranean Sea aboard two NGO boats. They are seeking to land at a safe port, but are finding all ports closed to them

Looked at another way, the major accomplishment of the Magi was to get a lot of innocent babies killed. Truly Wise Men would have been able to predict the consequences of their actions.

Everyone loves it when people come together and share views. Great blog, keep it up!
wwe 2k apk

I often fail in my efforts to give God the gift of gold given to Jesus by the Magi and put God first in my life. However, I do try to honor God by receiving forgiveness and consolation through the Sacrament of Reconciliation each month. I agree with Pope Francis that frankincense, incense, is like prayer that rises up to God. I do pray throughout each day. Finally, I was intrigued by the Pope's image of myrrh as ointment for Jesus body, and his observation that "the Lord is pleased when we care for bodies wracked by suffering, the flesh of the vulnerable..." To me, the suffering and vulnerable include people who are disabled, senior citizens, the unborn, rape victims, the seriously ill , and victims of war and human trafficking.