What does the Holy Family teach us about ourselves? 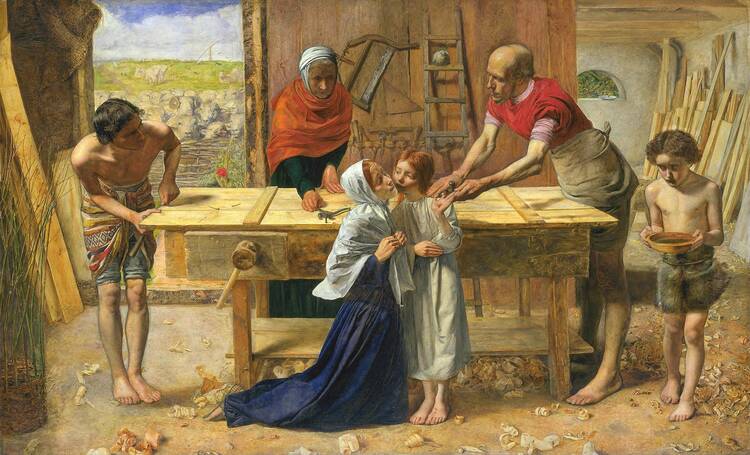 One of our many modern culture wars centers on the right of any individual to create his or her own family. Some would argue that this does not even require the consent of a second person, since having any sort of partner is not a requirement for adoption or surrogate parenting. As for the kids, they remain where they always have, without a voice in the decision.

Tommy Orange uses an old template, first employed in Chaucer’s The Canterbury Tales, to depict a thoroughly modern world. In his novel There There (2018), a contemporary group of Native Americans are headed to a powwow. We learn their tales as they go.

The story of “Opal Viola Victoria Bear Shield” wryly illustrates how the modern family has changed. We think individuals form families. Our ancestors, of all hues and cultures, would have put it the other way. The family forms us, and, not as individuals, but as integral members of one family. Notice how young Opal stands between two worlds, two understandings of family.

Jacquie’s last name is Red Feather, and mine is Bear Shield. Both our dads left our mom. That morning our mom came home beat up, we took the bus to a new house, the yellow house. I don’t know how she got us a house. On the bus I moved closer to my mom and put a hand into her jacket pocket.

“They come from old Indian names. We had our own way of naming before white people came over and spread all those dad names around in order to keep the power with the dads.”

I didn’t understand this explanation about dads. I didn’t know if Bear Shield meant shields that bears used to protect themselves, or shields people used to protect themselves against bears, or were the shields themselves made out of bears? Either way it was all pretty hard to explain in school, how I was a Bear Shield, and that wasn’t even the worst part. The worst part was my first name, which was two: Opal Viola. That makes me Opal Viola Victoria Bear Shield. Victoria was our mom’s name, even though she went by Vicky, and Opal Viola came from our grandma who we never met. Our mom told us she was a medicine woman and renowned singer of spiritual songs, so I was supposed to carry that big old name around with honor. The good thing was, the kids didn’t have to do anything to my name to make fun of me, no rhymes or variations. They just said the whole thing and it was funny.

Many indigenous people gave young children temporary names. Later, once they experienced something, perhaps through a personal quest, they would reveal the name that expressed their deepest understanding of self. Yet whatever personal name they chose, they remained members of a clan and a tribe, protected by their guardian powers. No one ever happily stepped away from the family, the clan or the tribe. That would have meant stepping away from themselves.

Not being his neighbor or kin, none of us can say what came from Joseph and what was of Mary, but we do know that the two of them made him the man he was.

In his hometown of Nazareth, Jesus would have been known as Jesus bar Joseph (Jesus the Son of Joseph). Patriarchy (dad names, as Opal’s mom puts it) entered Hebraic life, as it typically does in history, with the development of agriculture and the apparent need to assign ownership of the land. When he left home and encountered strangers, they most likely called him Jesus of Nazareth. Surnames are a relatively modern phenomenon, one that entered culture with the need to identify taxpayers.

The thought behind calling Jesus the Son of Joseph was that if you knew the father, you already knew a lot about the person standing in front of you. Who else, save the mother, would have done more to form the personality, to instill the values and the habits that form this person?

In celebrating the Feast of the Holy Family, we draw attention to this fundamental fact about families, and, in this case, salvation. Not being his neighbor or kin, none of us can say what came from Joseph and what was of Mary, but we do know that the two of them made him the man he was. They formed him in the faith of Israel, taught him to pray and gave him the vigor to preach with authority. The compassion that animated his ministry came from them. His laugh and his smile, perhaps even his gait and physical movements, would have echoed those of his parents.

This is why the church considers Mary and Joseph to be her two most powerful saints. Christ forms all of his saints. His grace makes them into the men and the women they become. That is true of Joseph and Mary as well, but their singular status derives from their vocation of forming the Christ himself, of parenting Jesus.

Is there any part of modern life messier, more packed with troubles and embarrassments, and real suffering than the family? Yet for all that, and even if we have been trained not to take note of it, our families give us life. They still make us who we are. And are not many of our fondest memories wrapped-up in family?

Do not lament how far your family is from the one that we call “holy.” Concentrate on what so many of us share with them: poverty, lack of opportunity, a need to relocate just to survive. So many of our families have no voice. Mary and Joseph were largely enveloped in silence. They did not matter to the world at large. They only mattered to their son. Yet, in the plan of God, that is all that mattered.

We got on a bus on a cold gray morning in late January 1970. Me and Jacquie had matching beat-up old red duffel bags that didn’t hold much, but we didn’t have much. I packed two outfits and tucked my teddy bear, Two Shoes, under my arm. The name Two Shoes came from my sister, because her childhood teddy bear only had one shoe the way they got it. Her bear wasn’t named One Shoe, but maybe I should have considered myself lucky to have a bear with two shoes, and not just one. But then bears don’t wear shoes, so maybe I wasn’t lucky either but something else.

Opal and Jacquie might not have had much when they boarded the bus that morning, but they had a mother and were members of a family. And no one, save God alone, can measure how much that means.

What is with this perverse heterodoxy?
Only a militant Protestant would paint the picture to signify the Holy Family presumably to defy the true nature of the family set-up in which Jesus was raised. .
Unless Jesus is the youngest male child depicted, with the presumption that Joseph was a widower and had a couple of children then this would seem to be as out of tune with the Gospel as fostering of homosexuality by another author here.

Phillip Stone---
It is obvious from the painting that the other people are workers.
I don’t get you connection to homosexuality. Pretty far reach.

A lovely creative piece that welcomes new ways of being family. Refreshingly lacking the dogma
Thank you for writing this piece