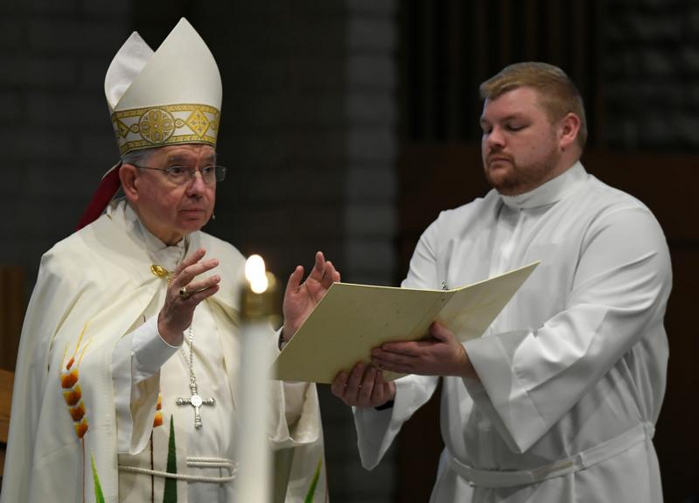 LOS ANGELES (CNS) -- The Archdiocese of Los Angeles Dec. 6 released an updated list of priests accused of sexual abuse of minors, with the report showing two cases of alleged abuse of current minors in the archdiocese since 2008.

The two cases were made public at the time the allegations were first received. Upon receiving the accusations, the archdiocese removed the two priests, Juan Cano and Jose Luis Cuevas, from ministry and reported them to law enforcement. Following separate investigations by police and by an Archdiocesan oversight board, the men were permanently removed from ministry.

"As disturbing as their behavior was, it shows that thanks to the swift action of alert teachers, parents and even children themselves, we can catch signs of abusive behavior early."

"As disturbing as their behavior was, it shows that thanks to the swift action of alert teachers, parents and even children themselves, we can catch signs of abusive behavior early," said Heather Banis, victims assistance ministry coordinator for the archdiocese.

Overall, the update added the names of 54 priests -- 27 of them now dead -- to the Archdiocese's "Report to the People of God," originally published in 2004 by Cardinal Roger Mahony, and updated in 2005 and in 2008. The archdiocese has posted the full list, along with a message from Archbishop Jose H. Gomez, on a new website, https://protect.la-archdiocese.org.

"We owe it to the victim-survivors of abuse to be fully transparent in listing the names of those who perpetrate this abuse," Archbishop Gomez said.

The majority of the names belong to priests accused in the last 10 years of misconduct alleged to have occurred before 2008.

In a departure from how other dioceses have handled such listings, Archbishop Gomez instructed that the archdiocese include the names of deceased priests with allegations that could not be fully corroborated but were nonetheless considered "plausible" by the independent oversight board that reviews accusations for the archdiocese. This broader standard was also applied for priests who had "long ago left the Archdiocese before the allegation of misconduct was received," the Archdiocese said in a statement.

The decision to broaden the standard for those allegations from "credible" to "plausible" for those priests was made "out of respect and deference to the victim-survivors who made the report," the Archdiocese said.

Under long-standing archdiocesan policy, when misconduct allegations are received, they are immediately reported to police and the alleged perpetrator is removed from ministry pending the outcome of investigations by law enforcement and the archdiocesan oversight board. In addition, public announcements are made at every parish and school where the alleged perpetrator may have served.

Cano, a Mexican-born priest ordained for the archdiocese in 2015, was removed from ministry in January 2018, when a teenage girl reported an allegation to authorities stemming from his time at Our Lady of Grace in Encino.

Public announcements of the allegation were made there and at 11 parishes where Cano had served as either a priest or a seminarian.

The purpose of the announcements is to alert others who may have suffered misconduct at the hands of the priest and to encourage them to come forward, the archdiocese said. In the case of Cano, the announcements resulted in allegations involving two additional minor females and three additional adult females.

The 35-year-old Cano is currently "subject to pending canonical process for return to lay state," and the allegations are being investigated by law enforcement and the L.A. district attorney, according to attorneys for the archdiocese.

Cuevas, 74, was a former Comboni Missionary incardinated in the archdiocese in 2006. He was removed from ministry in 2012 after accusations of misconduct were made by two women at St. Athanasius Church in Long Beach, where he served from 2006 until 2012. The alleged incidents occurred in 2010.

When announcements were made in parishes where the Mexican-born priest had worked in the past, a teenage girl came forward with an additional accusation of sexual misconduct. The victims were all members of St. Athanasius.

Cuevas served time in jail and was eventually sentenced to five years' probation after pleading no contest to charges in 2013.

Cuevas served time in jail and was eventually sentenced to five years' probation after pleading no contest to charges in 2013.

He is currently registered as a sex offender in California and earlier this year was ordered by the Vatican to a life of prayer and penance.

The third man, Roberto Barco, was a priest from the Diocese of Chascomus, Argentina, accused in 2016 of sexual misconduct with a teenage female dating back to 2009 or 2010 during his time ministering in the Diocese of San Bernardino, California.

Barco was serving at St. Mary Parish in Palmdale at the time the accusation was reported to the Archdiocese of Los Angeles by the San Bernardino Diocese. He was recalled to his home diocese soon after.

"In each of these cases, when the allegation was received, it was immediately reported to law enforcement, announcements were made at the parishes and schools where the priest had been present, and the matter was investigated and reviewed by the Archdiocese Clergy Misconduct Oversight Board," according to the update posted on the archdiocesan website.

In his remarks, Archbishop Gomez said that "every case of child sexual abuse is one too many, a crime committed against an innocent soul, a sin that cries out to heaven for justice, reparation, and healing."

While urging continued vigilance, he acknowledged that "we have witnessed a dramatic reduction in incidences of abuse over the last two decades."

Francesco Cesareo, who heads the independent National Review Board that oversees the handling of abuse cases for the U.S. Conference of Catholic Bishops, said that periodically releasing names of accused priests is one way that bishops can show laity they "understand the gravity of the situation," especially in light of the reawakening clerical abuse scandal in the U.S. church.

Such releases allow the laity "to be very aware of individuals who may have abused, or were credibly accused of abuse -- which may then lead others to come forward" while showing "that the issue can really be dealt with in a concrete and definitive way," said Cesareo in an interview with Angelus at the annual bishops' meeting in Baltimore last month.

Former FBI official and sex abuse protection expert, Kathleen McChesney, said that while important, releasing the names of accused priests must be done in a "professional" way that weighs each accusation carefully.

"It's extremely helpful for the bishops to make those sorts of decisions with the guidance of professionals, such as members of their lay review boards," McChesney told Angelus.

McChesney was the first director of the U.S. bishops' Office of Child Protection, launched in 2002. She served for three years, during which the bishops introduced the Charter for the Protection of Children and Young People in 2004.

That document called on dioceses "to be open and transparent in communicating with the public about sexual abuse of minors by clergy within the confines of respect for the privacy and the reputation of the individuals involved."

"By disclosing names, you are doing what is appropriate to fulfill that aspect of the charter," McChesney explained.

According to Banis, the timely reporting by parents, teachers, and even children themselves of signs of potential abuse is what enables an equally timely response. She sees it as an affirmation of the efficacy of the archdiocese's efforts.

"Thanks to them, we're catching some of the 'grooming' early, and protecting these children from the horrific abuses that we've seen in the past," said Banis, who made headlines after calling on U.S. bishops gathered in Baltimore in mid-November to respond to and learn directly from victim-survivors of abuse.

Cesareo agreed that the "mechanisms" in place in the archdiocese are showing results. "I think in many ways Los Angeles is a model for how things ought to be done, and have been done, that other dioceses can look to," he said.

Why is Roger Mahony still a priest?

Juan Cano has not been "permanently" removed from ministry. His faculties are suspended. The investigation is ongoing and, therefore, it is unjust to include his name as permanently removed. Why does America Magazine continue to do injustice to those who are accused but not proven guilty? Even in Canon Law, we are innnocent until proven guilty. You should, at the very least, be contacting the accused, or their legal counsel, to get their take. But no, you rush to judgment - if their is an accusation it must be true.

"every case of child sexual abuse is one too many, a crime committed against an innocent soul, a sin that cries out to heaven for justice, reparation, and healing." Thank you, ArchB Gomez for calling abuse a crime that needs to be prosecuted first and prayed about later----this is so much better than the early days when abuse was only a sin that you could go to confession about. Sounds like LA has finally entered the 21st century--we never saw or heard about this kind of reaction while that dinosaur Mahony was Cardinal.