The enduring call to fight racism 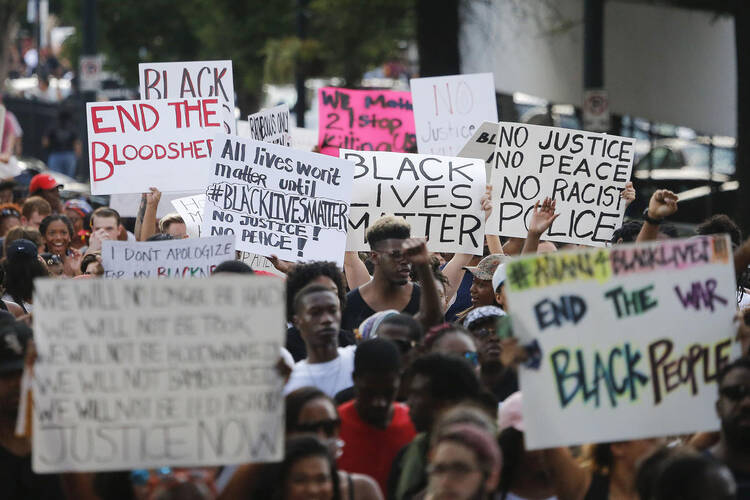 For the first time since 1979, the U.S. Conference of Catholic Bishops has released a pastoral letter on racism. The new letter, “Open Wide Our Hearts: The Enduring Call to Love,” developed by the conference’s Committee on Cultural Diversitiy in the Church, was approved by the bishops, 241 to 3, on Nov. 14.

Like “Brothers and Sisters to Us,” the 1979 pastoral letter, this new communication names racism as a sin, calling it “a failure to acknowledge the human dignity of the persons offended, to recognize them as the neighbors Christ calls us to love.” The document touches on issues like the water crisis in Flint, Mich., police misconduct, racial biases in the criminal justice system and the relationship between racism and other forms of prejudice, including anti-Semitism and xenophobia. The new document also differentiates among the varieties of racism faced by Hispanics, Native Americans and African-Americans. “As this country was forming, Africans were bought and sold as mere property, often beaten, raped, and literally worked to death,” the letter states. Language this explicit and historically detailed is a significant development from the approach of the authors of the 1979 letter.

The new pastoral letter calls on Catholics to work for racial justice and proposes practical steps, including acknowledging the complicity of Catholics in the sin of racism.

The new pastoral letter calls on Catholics to work for racial justice and proposes practical steps, including acknowledging the complicity of Catholics in the sin of racism, educating people about the nation’s legacies of slavery and discrimination, and working for racial justice in parishes as well as in civic and social institutions.

In recent years, Catholics of color have been critical of the church’s own institutional ties to slavery, including the sale of 272 enslaved men, women and children by the Jesuits at Georgetown University in 1838, as well as the church’s historically slow response to the demands of  justice. Others have been critical of the fact that it has been nearly 40 years since the bishops released their last major statement on this important topic. While these criticisms have some merit, “Open Wide Our Hearts” is a step in the right direction.

“The Church in the United States has spoken out consistently and forcefully against abortion, assisted suicide, euthanasia, the death penalty, and other forms of violence that threaten human life,” the bishops say. “As bishops, we unequivocally state that racism is a life issue. Accordingly, we will not cease to speak forcefully against and work toward ending racism.”

As reports of xenophobia and other forms of hate crimes continue to rise in the United States, and as racial tensions are cynically exploited for political advantage, the pastoral letter is a necessary reminder for Catholics of their duty, as both Christians and citizens, to combat racism and every form of unjust discrimination.

Two questions: Is the US the least racist developed country? If racism is a sin are those who deny the causes of racial problems committing a sin by essentially endorsing the causes?

Orlando Patterson, a black sociologist at Harvard, said about 20 years ago concerning the United States

What caused the extremely high incidence of fatherless households in the Black community.

I suggest a clarification to your report. The declaration did not suggest Catholic people’s complicity in sin, which, presumably can only be personal, but rather, complicity in evil, which indicates an impersonal abstraction, although one to be avoided, to be sure.

The relevant quote is:

“The truth is that the sons and daughters of the Catholic Church have been complicit in the evil of racism.”

This is to be contrasted with your article, which states:

“...including acknowledging the complicity of Catholics in the sin of racism”

Let me hear this from a pulpit, not as an aside, but as the core theme from a sermon. It would be a very practical and pragmatic lesson, a quality of sermons far too often lacking as Catholics face a difficult world in which to live.