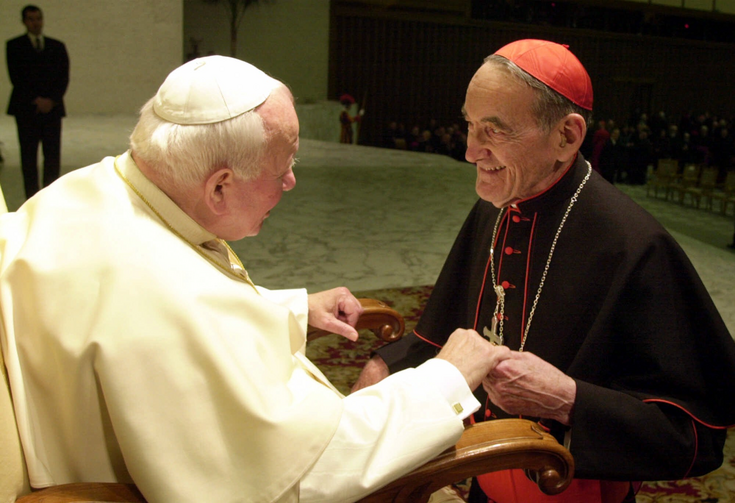 This past summer marked the 100th anniversary of the birth of Avery Dulles, S.J., the first U.S. theologian to be elevated to the College of Cardinals. A son and great-grandson of secretaries of state, Dulles shocked the mid-20th-century Eastern establishment first by becoming a Catholic and then by entering the Society of Jesus. In the course of his 50 years as a scholar and teacher, he emerged as one of the brightest theological minds of his generation. His most famous work, Models of the Church, published in 1974, was a groundbreaking survey of ecclesiology in which he offered several different yet complementary ways of entering into the mystery of Christ and his church. His work appeared 75 times in America magazine alone.

To my mind, there are five or six models of Avery Dulles. There is Dulles as American aristocrat, Dulles as friend and family member, Dulles as Catholic convert, Dulles as Jesuit, Dulles as theologian, Dulles as cardinal. As he himself would say in a different though related context, “each of the models brings out certain important and necessary points, but any model used in isolation will lead to distortions because each model exhibits only a particular reality” of the child of God and disciple of Jesus Christ who was Avery Dulles. Yet these models do afford a glimpse of the trajectory of his life. There clearly is an early Dulles and a later Dulles, for example, but not in the way people are accustomed to thinking about it.

From his own perspective, the early Dulles was the agnostic son of the American aristocracy who enrolled at Harvard College. The later Dulles, the only later Dulles that ultimately mattered to him, was the young man who met Jesus Christ at Harvard College and entered his church in the basement of St. Paul’s, just a few feet from Harvard Yard.

How fitting, then, that the Gospel reading at a Mass celebrating Dulles’s life last weekend at St. Joseph’s Seminary in Dunwoodie, N.Y., describes a man born blind, whose faith in Jesus Christ gives him sight and, even more, gives him purpose. That is probably how Avery Dulles himself would have described his own conversion. And he would have recognized that the most important line in that reading about Bartimaeus is the last one: “Immediately he received his sight and followed him on the way.”

Conversion, as Avery Dulles knew, is not a one-time event but a lifelong journey.

“And followed him on the way.” Conversion, as Avery Dulles knew, is not a one-time event but a lifelong journey. And Dulles would have recognized followed as the most important word, for, as he would have certainly known, St. Ignatius taught that “love manifests itself more in deeds than in words.”

Avery Dulles’s deeds are well known to American Catholics. But one’s deeds form a coherent and compelling whole only if they proceed from a coherent and compelling inner reality such as love. In that sense, then, love is the key to Dulles’s deeds, the hermeneutic for his life, the essential, continuous reality that runs through the “models” of his personhood, discipleship and priesthood.

Jesuits are much misunderstood creatures. Admittedly, this is often our own fault. We are known for our many years of training, the many degrees, books, publications we accrue, compose and disseminate—so much so that people often think this is what makes us who we are. But it is not. A man becomes a Jesuit through his personal encounter with the Son of the Living God through the Spiritual Exercises of St. Ignatius. That alone is what makes us who we are. That encounter is the defining experience of a Jesuit, the indispensable center of his life, which affords him the freedom to journey to the margins of life in search of God in all things.

The love affair that Avery Dulles had with our risen Lord was the inner reality that propelled him, that gave his life meaning and made his work meaningful. Avery Dulles was, as the Rev. Robert Imbelli once said, a virecclesiasticus. But he was a virecclesiasticus only because he was first and last a vir Christi. We know this because he told us in these moving words from his final lecture:

The most important thing about my career is the discovery of the pearl of great price, the treasure hidden in the field, the Lord Jesus himself. As I approach the termination of my active life, I gratefully acknowledge that a benign providence has governed my days.

As we celebrate his centennial we give thanks to that same benign providence for the gift of Avery Dulles and the model Catholic, Jesuit and theologian he is for us all.

Avery Dulles, pray for us.

The greatest honor of my life was to have been invited to attend the Consistory at which Avery Cardinal Dulles SJ was elevated to the rank of Cardinal. Richard John Neuhaus gave a wonderful address at the Gregorian luncheon honoring Fr/Bishop/Cardinal Dulles. Foolish me, I only read his books after these events.