Catholics cite God, not homilies, as reason for attending church 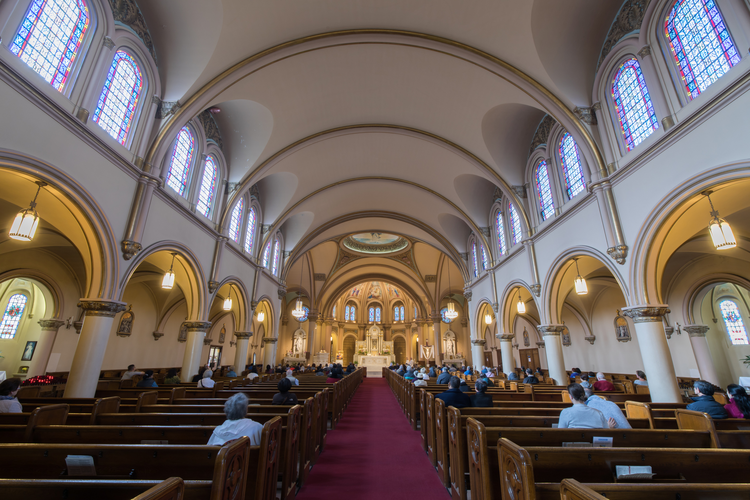 A Mass is celebrated at Star of the Sea Catholic Church in San Francisco. (iStock/yhelfman)

Compared with other Christians in the United States, Catholics are more likely to attend church to please other family members—and are significantly less likely to go because they “find the sermons valuable.” Those were among the findings of a Pew Research Center poll released in August. Pew interviewed 4,729 U.S. adults, including 844 self-identified Catholics, last December to find out why they regularly attended church or stayed away.

Among those who rarely attend church, 37 percent of all adults and 47 percent of Catholics chose “I practice my faith in other ways” as a “very important” reason they did not attend church. Only 28 percent cited a lack of belief in religion as a very important reason; nonbelievers were disproportionately young, male and highly educated, and they identified more with the Democratic Party. Protestants were more likely than Catholics to say, “I haven’t found a church I like,” and people under 30 were most likely to say they “don’t have the time” to attend.

Adults under 30 who regularly attended church were also the least likely to say they often experienced “a sense of God’s presence” there (63 percent versus more than 80 percent for other age groups). However, older groups were more likely to say they attend “for comfort in times of trouble”; it may be the case that life experience strengthens belief and creates an openness to spirituality.

Source: “Why Americans Go (and Don’t Go) to Religious Services,” Aug. 1, Pew Research Center. The margin of error was 3.7 points among non-attenders, 3.0 points among regular church attenders and 7.8 points among Catholics. Both non-attenders and attenders were divided into religious groups, including Protestant denominations that have historically had mostly black congregations, by self-identification. Because respondents could give multiple answers, column totals in the accompanying charts add up to more than 100.

The reason to go to Mass besides being an obligation handed down by God (third commandment) is that God is there for our taking. Homilies are a great addition and some of the best ones explain the scriptures and the faith. But they are not the reason for attending.

King David was convicted of grave sin by taking a census as described in 1 Chronicles 21 and following.
It is also not made clear there why it was such a wrong thing to do.

Was it doubt about the sovereignty of God presiding over the affairs of his chosen people; was it attempting to get knowledge that really only belonged to God?

Surely living as a disciple of Christ does not necessitate knowing what our neighbour is up to, and why.

I agree that we should attend Mass as God taught us in the Ten Commandments. As I go to the Sacrament of Reconciliation each month to receive forgiveness for my sins, I believe receiving Jesus worthily in the Eucharist is of tremendous importance. I also find comfort in praying for my intentions as well as other people in need whom I know. Finally, although the celebrant's homily isn't essential to the reverence that should be a crucial part of every Mass, the quality of the priest explaining the Scriptures and the faith is important to me.