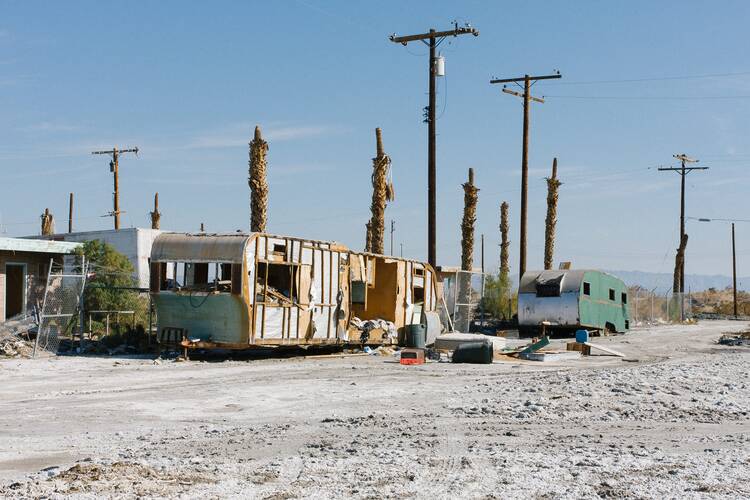 Photo by Jonathan Percy on Unsplash

The family chronicle of native Kansan Sarah Smarsh is gaining a lot of press and nominations for literary prizes:Heartland: A Memoir of Working Hard and Being Broke in the Richest Country on Earth (2018). Its poverty plays out on a farm in Kingman County, Kan., and in the nearby city of Wichita.

“We were ‘below the poverty line,’ I’d later understand—distasteful to better-off whites, I think, for having failed economically in the context of their own race. And we were of a place, the Great Plains, spurned by more powerful corners of the county as a monolithic cultural wasteland. ‘Flyover country,’ people called it, like walking there might be dangerous. Its people were ‘backward,’ ‘redneck.’ Maybe even ‘trash.’”

In telling the multigenerational story of her family, Smarsh rejects the equation that white + poor = trash. “Our struggle forced a question about America that many were not willing to face: If a person could go to work every day and still not be able to pay the bills and the reason wasn’t racism, what less articulated problem was afoot?”

That’s what Smarsh seeks to show. She begins her story with a farmer.

“Arnie, a man I would later call my grandpa, bought the farmhouse in the 1950s to raise a young family. He spent days sowing, tending and harvesting wheat. He eventually owned about 160 acres, which is a quarter of a square mile, and farmed another quarter he didn‘t own. That might sound big-time in places where crops like grapes are prized in small bunches. But for a wheat farmer in the twentieth century, when the price per bushel had been pushed down by the market even as yields had been pushed up by technology, it was just enough to earn a small living.”

That’s why Arnie also raised alfalfa, cattle and chickens. And “for extra money during the winter, when the fields were frozen, he butchered for a meat locker down the highway toward Wichita and sold aluminum cans he collected in barrels near a trash pile west of his pole shed.”

But Heartland is about heroines, not heroes. Women who fall in love, become pregnant and marry men at much too young an age. Their husbands abuse alcohol and, all too often, their wives. The men either abandon their families or force their young wives to leave them, fleeing in the family clunker with kids and whatever else will fit.

"If a person could go to work every day and still not be able to pay the bills and the reason wasn’t racism, what less articulated problem was afoot?”

“Betty wasn’t the farming kind. She’d spent her adult life moving among urban areas in the middle of the country—Wichita, Chicago, Denver, Dallas—and neighboring towns. She and her daughter, Jeannie, who would be my mom, first hit the road when Betty was a teenager. Their whole family, which consisted mostly of single moms and their daughters, was hard to pin down. By the time Jeannie started high school, they had changed their address forty-eight times, best I can count. They didn’t count. They just went.”

Sarah Smarsh has left behind her grandfather’s Catholic faith: too many bleeding statues, too much talk about suffering. The irony is that her multi-generational story reads like an illustrated manual of church teaching.

It lays out how suffering enters our worlds as the result of sin. The women of Heartland make terrible decisions in their youth, choices about love that will limit them for life. And the story itself sells the doctrine of original sin, if one thinks of that as something more than an invisible soul-stain, inherited from Adam. Mothers give their children precarious childhoods, raising up women of low self-esteem and the men who prey upon them. In short, we are sinned against before we learn to sin.

Yet these women valiantly struggle against their circumstances. They’re the ones who hold their families together, who fight for custody of their kids, who live in trailers and drive to work in beat-up cars.

“Whoever wishes to be great among you will be your servant;

whoever wishes to be first among you will be the slave of all.

For the Son of Man did not come to be served

Our faith tells us that Christ chose to suffer on our behalf and that when we choose to do the same, in the service of others, we imitate Jesus in our own lives. That’s what the women of Heartland do in each generation. They may suffer the effects of sin, even yield to it, but they try valiantly to be the saviors of those whom they love. If only the rest of the church, also struck by sin, could reach out to the margins, could learn to suffer with them!

Our faith tells us that Christ chose to suffer on our behalf and that when we choose to do the same, in the service of others, we imitate Jesus in our own lives.

As is so often the case in those who reject the faith, what is really cast aside is an erroneous understanding of it. What remains is a piercing and perceptive grasp of what faith should mean. Sarah Smarsh writes:

“In my German Catholic farming community, we believed in Jesus. The crucifixion story, in particular, resonated: someone had given up his body for a cause. Jesus suffered on a cross for someone else’s soul, and we suffered in wheat fields for someone else’s bread—maybe even for the wafers we accepted on our tongues after priests transformed it into the body of Christ.

Like us, Jesus came from peasants. Near the altar of our tiny country church rested a sculpted scene of carpenter Joseph, teenage Mary and the baby Jesus. When I was very small, I thought my dad, who built houses for a living, was Joseph; my grandfather had hammered together the steeple above us and carved the communion rail from a walnut tree on our land. Females weren’t allowed to stand, let alone preach, at the altar beyond that rail; at the nearby Pietà, dusted with care by elderly women, I recognized in Mary’s face the emotional anguish of my mother, who became pregnant with me at seventeen.”

Father Terrance, thank you for broaching the subject. However, I don't see how anyone could pretend to be a Christian and refer to poor people as trash. You write "If only the rest of the church, also struck by sin, could reach out to the margins, could learn to suffer with them." In my view, this is paternalistic. Jesus preached the Kingdom of God to the poor, for their liberation, and He condemned those in power and authority that that were responsible for the oppression of society's marginalized. The poor are the chosen ones of God and his Messiah, not because they are ready and adorned with moral virtues, but because they are poor. The reason is not in the poor ones, but in God, who wants to choose them (Mt 11:3).
This is the meaning of the blessedness of the poor, according to Saint Luke (Lk 6:20): the concrete and and historical poor, made objects of exploitation, will be the first beneficiaries of the goods of the Kingdom, which are supported in justice, without which no good has a firm base. So, Father Terrance, exactly what is the "less articulated problem that is afoot" that you ask?

Philip, the less articulated question ... Are people so enamoured with the idea of unbounded wealth that we are blind to the structural reality of an economy that depends on keeping the masses poor, so that a few elites will be able to exploit the masses into working for poverty level wages while governmental policies and tax structures benefit the few at the top who bribe the voters with pro-life, family values?

Yes, A Fielder, thank you. That is the "less articulated" question. Being fair to Father Terrance, though, I guess he diplomatically avoided answering his own question at the risk of upsetting and alienating a good many of his parishioners. I wonder though what Father Terrance really means when he writes that "It lays out how suffering enters our worlds as the result of sin"? I doubt his superiors would be approving if he means the collective societal sin of an exploitative and unjust political and economic system. He would be accused of (gasp) being a Liberationist! This type of view gets clergy into trouble; Archbishop Romero was canonized as a martyr this week. And let's not forget the words of Archbishop of Recife, Brazil, Dom Helder Camara:

Philip, I have noticed that Fr Terrance does often emphasize the evil of personal sin. This was one of the first articles in a while to acknowledge the reality of social sin and its wide ranging effects. I was happy to see the progression of his thought and his ability to introduce at least a little nuance into a complex situation. In my limited experience, many priests are more comfortable talking about personal sin. “Society” can’t go to confession, only people can. This might be due to their training, but I also believe that most priests are careful to not push the middle/upper classes further than they are willing to go. This is not necessarily the priests”fault” just the reality that people don’t want to feel guilty for something that can’t or don’t want to change, especially when it is so much easier to simply blame the poor for being “lazy.” I’m willing to bet that Fr Terrance’s approach to this article is actually pretty well thought out and on target to remind us that there are many poor people who are not lazy.

Black, white, yellow, brown - colors are temporary for those marching triumphantly to their eternal home.

Are you sure? Catholics believe in the resurrection of the body. Maybe it’s just racism that is temporary for those of us on the way to heaven. I think God wants to eliminate racism, not skin pigment.