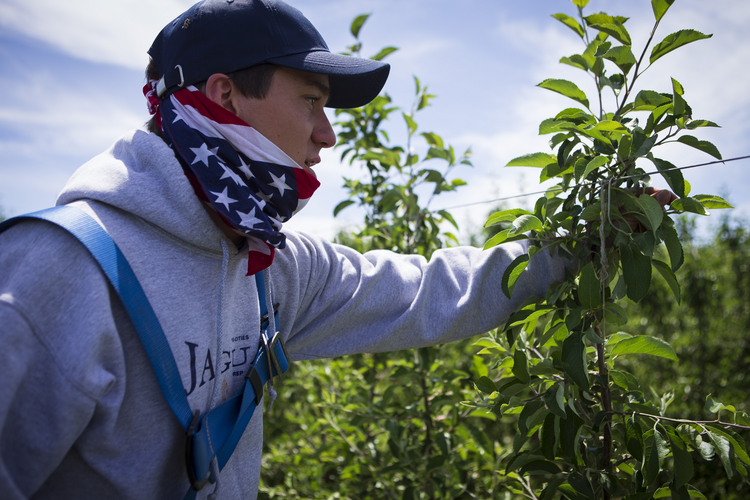 Chris Yakawich, discerning the priesthood, works in the agricultural fields with migrant laborers as part of his formation. (CNS photo/Chaz Muth)

YAKIMA, Wash. (CNS) -- Seminarian John Washington was looking for a summer cultural experience as he prepared to end his academic year at Chicago's Mundelein Seminary and he found it in an agricultural field in central Washington.

The seminarian from the Archdiocese of Atlanta spent his summer tending to Washington state's bountiful apple trees, speaking "field Spanish" with Latino migrant workers, learning about life in the migrant camps and bringing the Gospel to the agricultural laborers.

"I wanted an adventure this summer," Washington said with a chuckle as he plunged a shovel into the dark earth while planting a replacement apple tree. "I'd say I got one."

He looked around and spotted a few other seminarians from the Diocese of Yakima and two Spanish-speaking migrant workers, who showed him how deep he should plant the tree.

All seminarians from the Diocese of Yakima are required to spend their summers working in the fields.

The future priest's summer in the Pacific Northwest's agrarian fields was part of the Diocese of Yakima's migrant ministry program, which he learned about from a Mundelein classmate, who is a Yakima seminarian.

All seminarians from the Diocese of Yakima are required to spend their summers working in the fields. It's part of their formation to work alongside the migrant laborers, to understand their plight, as well as their language, and to bring the faith to the people where they live and work.

When Washington heard about this program, it was something he knew he wanted to experience.

With favorable nods from both his vocation director at the Archdiocese of Atlanta and Yakima Bishop Joseph J. Tyson, the seminarian joined the team out west for the summer of 2018.

Yakima's migrant ministry program began in the summer of 2011, shortly after Bishop Tyson became the shepherd of the diocese.

The question of what to do with the seminarians during the summer months while they were not in school came up and the answer became clear, he said.

"We decided they should go out in the fields and pick apples," he said. "Good parents almost always require their children to get a job while they are home from college during the summer. It seemed natural to require the same from the seminarians and to do the kind of work that so many people here do."

"Good parents almost always require their children to get a job... It seemed natural to require the same from the seminarians."

In a nutshell, Bishop Tyson wants his future priests to really understand the lives of the population they will be serving as priests, and since the largest sector of the state of Washington's economy is agriculture, he decided the seminarian formation must include working with the migrants.

So, when Daniel Sanchez completed his first academic year at Mount Angel Seminary in St. Benedict, Oregon, in late May, he returned to Yakima and joined the other seminarians.

The seminarian, 22, rose four days a week at 4 a.m. at the Yakima rectory where he and the others in the migrant ministry stayed during the summer, prepared for a day of physical labor, met the others for morning prayer at 4:45 a.m. and left at 5 a.m. for the hourlong drive to the assigned apple orchard in Prosser, Washington.

Here’s why every child at the border belongs to all of us
Leo J. O’Donovan, S.J.

The Editors: Slashing refugee numbers is unethical and harms our country
The Editors

When Sanchez and the seven other seminarians and interns (those still discerning religious life) arrived at the orchard for their first day on the job, they were handed trimming tools by the foreman and directed to join the Latino migrant workers in the field to prune the rows of young apple trees.

This work required the men to sit on the ground, kneel and bend over, awkward positions that strained their joints and made their backs ache, further complicated by the blazing sun beating down on them.

"It's humbling," Sanchez said, as he acknowledged the work was more uncomfortable than laborious.

This is now part of his journey to becoming a priest.

"Not all of it is studying philosophy or theology or reading Scripture," Sanchez said as he wiped sweat from his brow. "Sometimes you've got to just man up and get shoveling."

The intention of the experience isn't necessarily meant to humble the seminarians, although Bishop Tyson told Catholic News Service that is an encouraging outcome.

"It's important that our future priests know in their bones the labor of the bread and the wine," said Bishop Tyson, "and know the lives behind our agricultural workers."

The Diocese of Yakima has roughly 40 parishes and mission churches and regularly serves about 170,000 Catholics, but during the harvest, an additional 100,000 migrant workers reside in the region, most of whom are Spanish-speaking Latinos.

"The seminarians' presence in those fields is very important," Bishop Tyson said. "Many of those workers don't have the ability to get to church. So, we need to bring church to them."

Seminarian Jacob Sevigny is no stranger to the agricultural fields in central Washington. He grew up in the area and has worked different farm and construction jobs throughout his young life.

He believes the migrant ministry will help him and his fellow seminarians become better priests, because, "in the words of Pope Francis, it's important for us to smell like the sheep and share our lives and understand the lives of our people."

"In the words of Pope Francis, it's important for us to smell like the sheep and share our lives and understand the lives of our people."

"When they become priests, when they preach the Gospel, they'll be able to aim the Gospel knowing the reality of the lives of the people they are serving," Bishop Tyson said.

Since all priests in the diocese are required to be bilingual, the migrant ministry provides Spanish immersion.

"Many of the people out here speak very little English," said seminarian Matthew Ockinga, who practiced his Spanish while speaking with the migrant workers in the field. "About 60 percent of the Catholics in the diocese attend Spanish Mass. You have to know how to speak the language of your people and the Spanish in the field is different than traditional Castilian Spanish."

Though the work in the field is a stark contrast to a seminarian's life at school, Ockinga said he believes their contact with the migrant workers is more valuable than the labor they are providing.

"I'm hoping that the migrant workers come away with the sense that they are part of the church no matter where they are at," Bishop Tyson said. "And that we love them and care for them and they are always welcome. There's always a place at the table."

After a month working in the fields, the seminarians shifted their presence to the migrant camps, where they taught a literacy program, provided catechesis and assembled prayer services.

The outreach is similar to the early church, where missionaries brought the Gospel to the people, Washington said.

"Talk about the new evangelization, this is reminding the (seminarians) that the parish isn't the building, it's the area and they are responsible for all of the souls in that area and not just the Catholic souls," Bishop Tyson said.

And it's the bishop's expectation that these lessons will become entrenched in the ministry of each of the seminarians when they become priests.