Óscar Romero long seen as a saint in El Salvador

Óscar Romero long seen as a saint in El Salvador 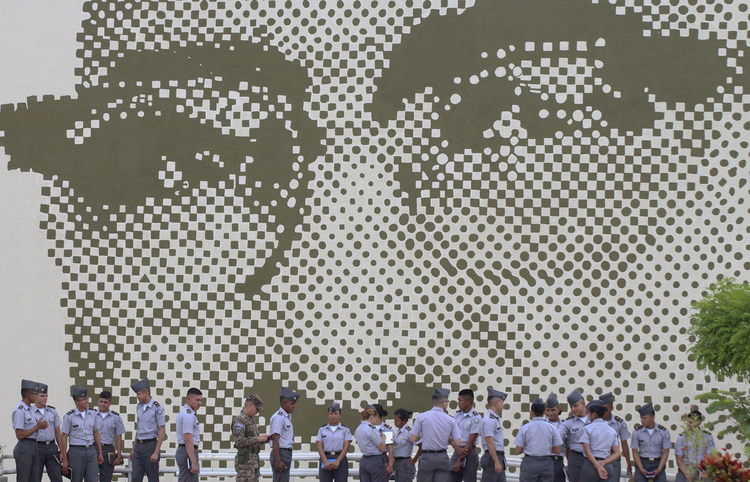 In this Oct. 3. 2018 photo, Salvadoran army cadets stand next to a huge mural of Archbishop Oscar Arnulfo Romero at the Foreign Office, in San Salvador, El Salvador. Romero was killed by a right wing death squad a day after demanding that the government stop the repression of the people. (AP Photo/Salvador Melendez)

SAN SALVADOR, El Salvador (AP) — Bespectacled, smiling and with close-cropped hair, the late Archbishop Oscar Romero's visage gazes kindly from postage stamps, handmade busts on sale at the San Salvador cathedral, even from a huge black-dot mural on the side of the Foreign Ministry.

On Sunday in the Vatican, Pope Francis will officially make Romero a saint nearly four decades after he was martyred by an assassin's bullet to the heart. But for many Salvadoran Roman Catholic devotees who already know him as "Saint Romero of the Americas" that will only formalize something they have long known in their hearts.

"He was a great man. He already was a saint," said Jose David Santos, 73, in a recent interview before traveling to Rome along with 5,000 other Salvadorans to be present for the canonization.

"He was a great example of humility," added Santos, clad in a white shirt with Romero's face imprinted on it. "He professed love for the poor man. He denounced injustices. He defended victims. He criticized the violence of the military and of the guerrillas."

Romero was slain March 24, 1980, a day after he implored the military dictatorship to "cease the repression" against civilians as the country spiraled toward a 12-year civil war.

At the time — and still today — some in conservative sectors loathed him as a "guerrilla in a cassock" for sympathizing with leftist causes. But he was and remains broadly popular among the poor and working class, whom he passionately defended, and many began lionizing him almost immediately.

"A real man of the people. ... And so even prior to his canonization, even shortly after his martyrdom, we see this almost kind of folk-saint, popular-saint devotion springing up," said Andrew Chesnut, chair in Catholic studies at Virginia Commonwealth University.

Romero was slain March 24, 1980, a day after he implored the military dictatorship to "cease the repression" against civilians as the country spiraled toward a 12-year civil war.

"I've found a number of people that have tattoos of his image on their arms ... a lot of popular murals and artwork on the streets of the capital," Chesnut continued. "So yeah, it's a real, genuine kind of grass-roots, working-class, popular devotion that you don't often see with a lot of other, European-born Catholic saints."

The fervor for Romero has grown so much that the cathedral crypt where his remains were interred can barely handle the thousands of pilgrims who arrive to pray in front of his tomb, beseech him for intervention or give thanks. Many also visit the hospital chapel where he was murdered while celebrating Mass.

Maria Isabel de Hilario never met Romero but is convinced that in 1981, the year after his assassination, he visited her on her sickbed.

"I didn't know who he was, and he came to my bed at the hospital. He put his hand on my head and told me: 'It will no longer be necessary for you to be here. You will be healed," de Hilario said, weeping, in front of the tomb. "We come every Sunday to visit him."

No place is more of a shrine to Romero than the Chacon family home in San Salvador. It was here that Romero sought refuge, watching TV and dining with the family to forget, even if briefly, the death threats that were mounting daily.

"He would sit next to my father to watch soap operas and tell jokes, while they prepared his beans for him. He said that this was his family. He said this home was his Bethany, that he felt so happy that he had an urge to take off his shoes," said Leonor Chacon, 80.

Chacon maintains a collection of Romero memorabilia — his cassock, a shirt, a postcard he sent the family from Mexico City's Torre Latinoamericana, at that time the tallest skyscraper in the Americas — and hundreds have come to the home to hear her. On a recent day she showed a photo of him taken in March 1980, days before his death.

"He knew that they were going to kill him. He told us, just like that. But he didn't want to talk about it," said Chacon, who first met Romero in 1963 when he officiated her wedding.

Romero's assassin was contracted by right-wing death squads, but none of those who ordered the killing were ever punished, in part due to an amnesty for civil war-era crimes that was ruled unconstitutional two years ago.

Many years after Romero's death, Pope Francis declared him a martyr killed because of "hatred of the faith," paving the way for his beatification and then canonization.

"It is the greatest thing we can have, it is the greatest blessing from heaven, the whole world acknowledging his sainthood," current San Salvador Archbishop Jose Luis Escobar Alas said. "Because not only his person but his teachings as well are being canonized."

Often said to have been influenced by the leftist Liberation Theology movement sweeping through the Latin American church at the time, Romero famously urged soldiers to disobey immoral commands and even asked President Jimmy Carter to cut off U.S. aid to El Salvador.

Many years after Romero's death, Pope Francis declared him a martyr.

Taking such a bold stance against the dictatorship, Chesnut said, was essentially "signing his death warrant."

El Salvador's civil war ended with peace accords in 1992. But the country is now plagued by hyper-violent street gangs, and Chesnut said many Salvadorans turn to Romero for solace from that.

"It's still one of the most murderous countries on Earth. ... Few people have suffered like Salvadorans have in the last few decades," he said.

Esteban Fuentes, a 55-year-old who has been driving a cab for 35 years in the Salvadoran capital and has a weathered card with an image of Romero hanging from his rear-view mirror, agreed.

"He has protected me from so much evil," Fuentes said. "I started working in the middle of the war, and I came out alive. I believe that Romero kept me alive and continues to watch over me in these times of great problems."