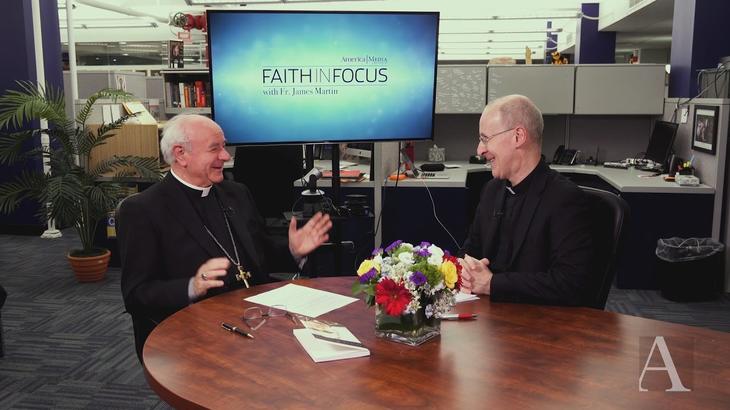 Archbishop Vincenzo Paglia, the president of the Pontifical Academy for Life and the postulator for the cause of Blessed Óscar Romero, experienced firsthand pushback against the archbishop’s canonization. The delay was political and “like a dagger in my heart,” he told James Martin, S.J., in a video interview with America.

"His beatification was the result of a great struggle," said Archbishop Paglia, who was wearing Archbishop Romero’s pectoral cross during the interview. "There were many in Rome, including some cardinals, who did not want to see him beatified. They said that he had been killed for political reasons, not religious ones. I studied this question, I did a great deal of work. For example, I examined his personal archives, which comprise some 70,000 documents. What emerged was a man devoted to his people. He wanted to free them from oppression. He wanted to bring to them the compassion of Jesus."

This resistance to Romero's beatification had personal implications for Archbishop Paglia.

“I even received threats when I took on this task. But I believed that the example of Romero was so extraordinary, so evident. In him, the Gospel message is summed up in an extraordinary way. Romero did not live for himself but for his people, like Jesus. This witness is so clear that in a globalized world it can touch the hearts of millions and millions of individuals. And if we want to change the world, we have to change the hearts of the people, just like Romero did.”

Archbishop Paglia: ‘Romero did not live for himself but for his people, like Jesus.’

Archbishop Paglia also spoke with Father Martin about how Romero became more involved with the struggles of the people of El Salvador after the assassination of Rutilio Grande.

“[Rutilio Grande] was a Jesuit who taught at the university level but chose to live in a small village just so that theology could be spread among the people through him. This presence in the village led to his being murdered; he and two peasants with him. Romero had become archbishop only 17 days earlier and he stayed up all night watching over the body of Grande, his good friend. That night, Romero wrote, he realized that it was his duty to take the place of Rutilio Grande. And in this sense, the martyrdom that Grande suffered before Romero lead Romero to conclude that the evangelical life, the life of a pastor, is worthwhile only if it is spent in the service of others.”

According to Archbishop Paglia, Pope Francis has been crucial in moving Romero’s canonization forward. Though the pope never met Romero, he did meet Grande and has also wanted to push forward his canonization.

“[Pope Francis] wants to have Rutilio Grande’s cause for beatification introduced as well. And as well the two peasants, one a young boy and one an elderly man, who were killed with him,” Archbishop Paglia said.

In addition to speaking about Romero, Archbishop Paglia offered some insights into the interpretation of “Amoris Laetitia,” Pope Francis’ statement on the family

“Amoris Laetitia” teaches us about discernment as a process within the family, the archbishop said.

Truth, Then Justice: Memory and healing in El Salvador
Luke Hansen
“When Pope Francis convoked the synod, he wanted to make it not about doctrine but rather about discernment, and in fact, the second chapter of ‘Amoris Laetitia’ is a discernment about the current situation of families, it is a wise spiritual reflection. In that chapter, Pope Francis talks about the ideal that families are to reach. Actually, he raises the bar to reaching that ideal, he doesn’t lower it, but he points out that to reach the ideal, we have to discern, that is, we have to see families in their concrete situation, and to do that we must accompany them over time.”

Archbishop Paglia also spoke about our current world situation as "a kind of dictatorship of materialism and money."

"For that reason, we need a cultural revolution. Human dignity means making every person, from the youngest to the oldest, from the holiest to the greatest sinner, the center of concern of the church, of politics, of the economy, of culture, of the arts and the trades. All of society is based on human dignity."

Exemplary lives, like that of Romero, remind us about how human dignity is at the center of the church’s mission, he said.

In light of this story (link below), I hesitate to follow the Archbishop's lead on any moral question. If it is not true, he should be given the chance to clarify. http://www.theamericanconservative.com/dreher/catholic-archbishop-paglia-homoerotic-fresco/

You sound like one of the idiotic critics of Michelangelo's "Last Judgment" fresco in the Sistine Chapel; homosexuals CAN go to Heaven, and it's about time that the Church acknowledges it.