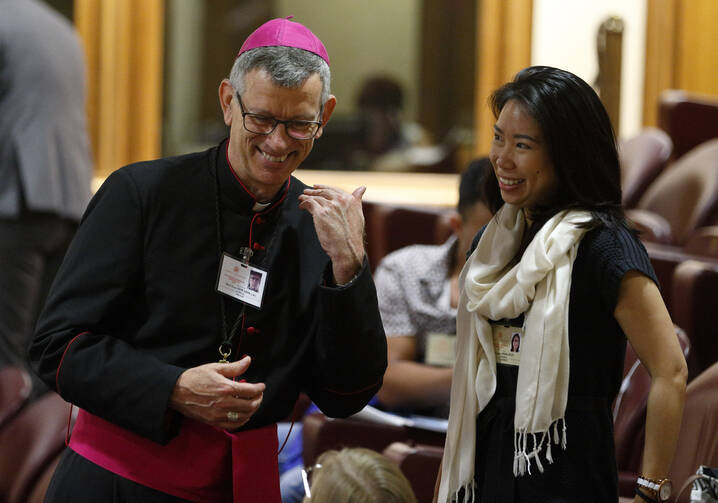 The synod on young people has completed the first part of its work, and participants are in high spirits, according to Sister Nathalie Becquart (France) and three cardinals—Oswald Gracias (India), Gerald Lacroix (Canada) and Desiré Tsarahazana (Madagascar)—who spoke at a Vatican press conference on Oct. 9.

The 14 small working groups, into which participants are divided according to language, have ended their discussion and submitted their reports on the first part of the working document (known as the “Instrumentum Laboris”), on the theme “Recognizing: the church listens to reality.”

“We must listen to young people and trust them.”

The Vatican has released the texts of all the groups in the original languages in which they were presented: four English, three French, three Italian, two Spanish, one German and one Portuguese. Participants will now return to the plenary session for interventions on Part II of the working document, “Interpreting: faith and vocational discernment,” and later break up again into working groups. The English language working groups are being chaired by four cardinals elected by participants in the group, including U.S. cardinals Blase Cupich and Daniel DiNardo.

At the press conference today, Cardinal Tsarahazana reported that the church in Madagascar, a predominantly Catholic country in the Western Indian Ocean, “is still seen as a reliable institution,” despite the many problems in the country linked to corruption, poverty and violence and the news of abuse in other places. Young people there participate in the life of the church and “recognize injustice in the society and want justice.” Many of them must move from the country to the city for security reasons, and do not trust the judicial system. “If the people of Madagascar truly live their faith, we would not have these problems,” he said.

“There is a great need for conversion in our country and elsewhere, too, both in society and in the church,” Cardinal Tsarahazana said. “All members of the church have to live lives that are coherent with the Gospel.”

He was deeply impressed by the message that is coming through “loud and clear” at the synod: “We must listen to young people and trust them.” Pope Francis has emphasized that, and Cardinal Tsarahazana expects the pope to do so when he visits Madagascar in 2019.

Cardinal Lacroix told the press that he was “truly impressed” by what he is hearing at the synod, which has been prepared with input from some 100,000 young people through online surveys, as well as an international seminar and a pre-synod meeting with 300 young people last March in Rome. He said this input has revealed the great diversity among young people and the very different situations they are living in.

He has also been very impressed to by the participation of the 30 young people at the synod. “They’re not just spectators,” he said. “They’re part of the parade!”

“They’re not just spectators,” he said. “They’re part of the parade!”

Cardinal Oswald Gracias, the archbishop of Mumbai and president of both the Catholic Bishops Conference of India and the Federation of Asian Bishops’ Conferences, recalled that many young people from all over the world have given their input in the preparatory phase of the synod and that this is evident in the working document. From all this and from what he has heard in the plenary session and in the discussion groups (he is moderator for English Group A), he said the synod is giving him “a renewed sense of hope and confidence in the church.”

“Young people want to work with the church,” he said. “The church has a great future with these young people.”

Cardinal Gracias, who is one of the nine cardinal advisors of Pope Francis, added that to enable young people to participate fully in the church, “it is so evident that we [bishops] have got to change our mentality toward young people.”

Sister Natalie Becquart, one of the women auditors at the synod and the former director of the French bishops’ commission for the evangelization of young people and vocations, spoke of her “great joy” at being able to be part of the synod where “we’re all in the same boat trying to navigate through the seas of the world.” She said she has been greatly impressed by “the humbleness” that she has seen among the synod fathers.

“The church has a great future with these young people.”

“It’s a very humble face of the church that recognizes fragility and the need for conversion,” she said. “[This] gives me great hope. There’s a great realism. We’ve got our feet on the ground; we’re not living in Mars. There’s something truly authentic here.” She recalled how she was much impressed by the witness of a young migrant in the synod hall and how the church in different lands is walking with the migrants in whom it sees Jesus.

One of the 36 women at the synod, Sister Natalie said that the role of women in the church and society has come up many times. Through their various inputs both before and during the synod, especially in the small groups, young people have said “we want to see the church with its dual face of men and women.” On this question, she said, “I’m touched to see that so many bishops have this issue at heart.”

She recalled that in France young women can participate very much in the church and said that she knows that the Indian bishops, too, have opened up much space for women—a fact confirmed by Cardinal Gracias.

More: Synod on Young Adults / Women in the Church

Sadly, the only comment which comes to mind here is "preaching to the converted".

The "youth" being talked to or talked at are not typical or representative.

It is encouraging and providential that the youth have taken center stage in the universal Church and the voices from the Synod acknowledging their voices as being of great importances. Hope abounds.

Meanwhile Abp. Charles Chaput continues his macabre ritual of doom and gloom, being a prelate of "no" while the rest are a body of "yes".

"There is no such thing as an ‘LGBTQ Catholic’ or a ‘transgender Catholic’ or a ‘heterosexual Catholic,’ as if our sexual appetites defined who we are; as if these designations described discrete communities of differing but equal integrity within the real ecclesial community, the body of Jesus Christ,” he said on Thursday. This has never been true in the life of the Church, and is not true now. It follows that “LGBTQ” and similar language should not be used in Church documents, because using it suggests that these are real, autonomous groups, and the Church simply doesn’t categorize people that way,” he added. He also offered a rebuke of “wealthy societies” in the developed world, including that of the United States, describing a “moral adolescence” which he said they seek to impose upon others."
https://cruxnow.com/synod-of-bishops-on-youth/2018/10/08/chaput-to-miss-week-two-at-synod-for-funeral-mass-in-philly/

Whatever one thinks about the pope's managerial methods, one is assured he knows the difference between being pro-life and pro-choice/death. I look forward to this Jesuit journal writing an article on his strong statements against the evil of abortion.

I have no idea what precisely this article said. Frankly, IMO it said nothing. I was like they were dancing around the most serious issues. Most young Catholics disagree on many teachings on sexual ethics: same sex marriage, contraception, women ordination, voluntary celibacy and a married priesthood, etc. So far, I have heard nothing about these issues.

Are we preaching to the choir here and only those young people who are attending weekly Mass. Keep in mind that only about 22% of worldwide Catholics attend Mass. How are we going to reach these Catholics? What are we going to say to them to encourage them to come to Mass and participate in ministry? Is the Church going to change its treatment of homosexuals, its other teachings of sexual ethics, the serious concerns of young people, et al? What's the message here?

It is very encouraging by nature. If you want to use any app for free install it from Play Store App. Paid app is also available on this.