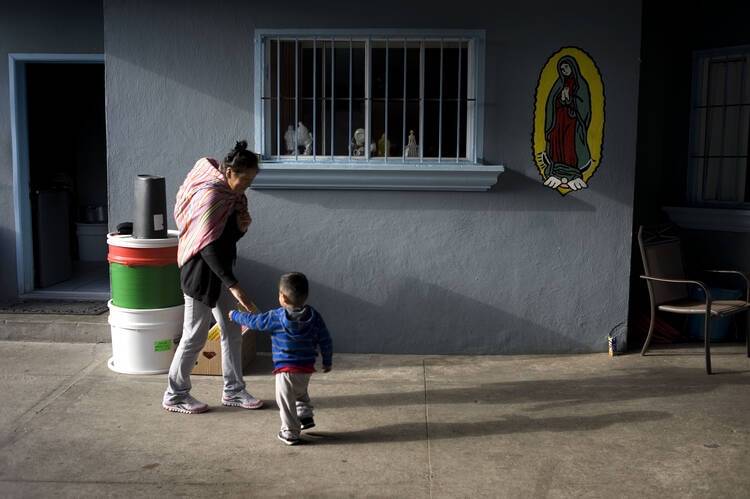 Concern for migrants and refugees took center stage at the Synod of Bishops on young people that is being held in the Vatican, Oct. 3 to 28, according to several participants.

Three distinct concerns were expressed in the first two days of the synod on “young people, the faith and vocational discernment” by synod fathers coming from three very different situations. All were related to the plight of the movement of millions of migrants and refugees, the vast majority of whom are young people, which Pope Francis has called “the greatest humanitarian crisis of our day.”

The first concern was expressed by synod fathers from those countries where the young migrants originate in the Middle East, Africa, Latin America and parts of Asia, setting off for foreign lands and leaving their home countries depleted of young people. Paolo Ruffini, the head of Vatican communications, reminded journalists in a briefing after the third session on Oct. 5 that “two-thirds of the world’s young people live in Africa, Asia, Oceania and Latin America.”

Pope Francis has called the movement of millions of migrants and refugees “the greatest humanitarian crisis of our day.”

He said “many speakers” identified the dramatic reasons for this massive migration: extreme poverty, war, terrorism and a lack of education and work opportunities. They are often attracted by “lies” about the life that awaits them at the end of their journey, and some end up victims of human trafficking, prostitution or drug trafficking.

The second concern was voiced by synod fathers from the countries of transit, such as Greece and Italy, where the migrants and refugees first arrive, stay for a while and need to be cared for in their basic needs, before many of them move on to other countries in Europe.

A third concern came from synod fathers from the countries where the migrants and refugees settle down and where there is not only the great challenge of integrating them and enabling them to find a new life in a new land but also the challenge for assisting the sons and daughters of the first generation of migrants.

Mr. Ruffini said there was general consensus among those who have spoken that “the church must be close to young immigrants in all these situations, including to those of the second generation who sometimes may have less opportunities than those of the first wave of migrants. It must accompany and help them in their different situations.”

Several speakers emphasized the importance of the liturgy for young people and helping them to “rediscover prayer.”

Several speakers, Mr. Ruffini said without giving names, emphasized the importance of the liturgy for these young people and helping them to “rediscover prayer.” He said other speakers emphasized the importance of developing liturgies that are suited to young people, in general, and not only to the migrants and refugees—liturgies in which young people can participate fully, liturgies with music that enriches the prayer and homilies that are meaningful based on the Scriptures.

Greg Burke, the director of the Holy See Press Office, chaired the briefing and next gave the floor to two bishops: Manuel Ochogavia’ Barahona, an Augustinian from the Diocese of Colon-Kuna Yala in Panama, which will host the next World Youth Day in January 2019, and Anthony Colin Fisher, a Dominican and successor to Cardinal George Pell as archbishop of Sydney, Australia, who coordinated the W.Y.D. in Australia 10 years ago. They are two of the very many bishops who are attending the synod for the first time.

The Panamian bishop emphasized that the young people are part of the church, but the entire church must help them not to be manipulated by forces that do not seek their good. He expressed joy that his country would welcome hundreds of thousands of young people from Latin America and other countries across the world next January and said they were working hard to prepare for the event. He spoke about the need to give full participation to young women in the life of the church and society and noted that today women do not receive the same salaries as men, many young women do not have the opportunity to be educated and many are exploited.

“The church has much to do to ensure the full participation of women in society and in the church.”

Just as he did yesterday at the synod in a speech that was subsequently published on the website of the Archdiocese of Sydney, Archbishop Fisher at today’s briefing also spoke of “the shame” of the Australian church at causing “so much hurt” to young people in their country and how often the bishops “responded so poorly” to denunciations of their failure to prevent clerical sex abuse. He said they have asked and still ask forgiveness from the victims of sexual abuse (many of whom are now older men) for “the great hurt” done to them. He said the church in Australia is going through a period of “humiliation and purification.”

He acknowledged that the big concern of synod fathers from other parts of the world is that of “migration” as mentioned above and “the denuding of their societies” of young people. He expressed his appreciation of “the realism” with which the synod is addressing these and other questions and “the way people spoke very frankly” and “examined the possibilities” for accompanying and meeting the young. He hoped the synod would help young people realize that the church is bringing them “the great gift of Jesus Christ, the God who became a young man for us.” He had words of great praise for Pope Francis who “is an old man, and yet he is there at the beginning of every day to greet each one of us, he is present and listens to all the interventions and joins us at coffee breaks.” He is “clearly engaged with this topic” and shows in many ways that young people are very close to his heart. He meets them each day and is “concerned that the church listens to them.”

Pope Francis at synod: “A church that does not listen...cannot be credible” to young people
Gerard O’Connell

The third panelist at today’s briefing was a young woman from Madagascar, Tahiry Malala Marion Sophie Rakotoroalahy, who is one of the 49 auditors at the synod and president of the national Catholic student group in her country, which Francis might visit in 2019 when he also visits Mozambique. She spoke about the political crisis in her island home that is causing many problems for students and the whole population. She emphasized that Catholic students have to work hard to ensure a better education for young people who feel “disoriented” in the present crisis situation. She highlighted the importance of young people evangelizing other young people and said that “the young should be apostles for other young people so that we can all move forward.” She viewed the synod as “a starting point” for the church’s mission to young people. She warmly thanked Pope Francis for calling the synod which, she said, “is a special blessing for the young.”

Among the speakers yesterday afternoon was Archbishop Charles Chaput of Philadelphia. Like his Australian counterpart, he posted the text of his speech on his archdiocesan website.

One participant, speaking to America, made an interesting observation: “There is no aggressiveness at this synod. In this way it is very different to the past two synods where there was much aggressiveness both inside and outside the synod,” he said. “This time there are no divisions, and from this aspect, one might even say it is boring. The focus is on content.”

This afternoon, synod participants met for the first time in the 14 working groups, divided according to languages. There are four English groups, three Italian, three French, two Spanish, one Portuguese and one German. It is in these groups that the real work is done, and from the discussion there the proposals for a new pastoral approach of the church to young people is expected to emerge.

Everyday this synod remains one without women's votes it is as useless as a synod without black people's votes. End the hate - ordain women priests! Demand same sacraments be available for all Catholics, and demand equal voting rights at all synods and conclaves for both genders. This is what is missing from our church - Justice.

Jesus made the decision to ordain only men. He could have chosen females, but he did not. So, nobody has the authority to second guess God Jesus Christ. If you want women priests then pray the Jesus comes back to Earth and says He was wrong before. Good luck. Jesus didn’t make mistakes. Although Bergolio might think he knows more than Jesus, as he changed Jesus’ direct words on divorce with his heretical Amoris Laetitia sneak footnote.

“One participant, speaking to America, made an interesting observation: “There is no aggressiveness at this synod. In this way it is very different to the past two synods where there was much aggressiveness both inside and outside the synod,” he said. “This time there are no divisions, and from this aspect, one might even say it is boring. The focus is on content.”

Thank goodness! We were very disappointed and worried that the uproar Abp Charles Chaput caused by writing a scandalous article in a non-Catholic, political rag, with Cardinal Blaise Cupich denouncing his insuborbindation, would cause divisions at this much needed and necessary synod. Deo Gratias.