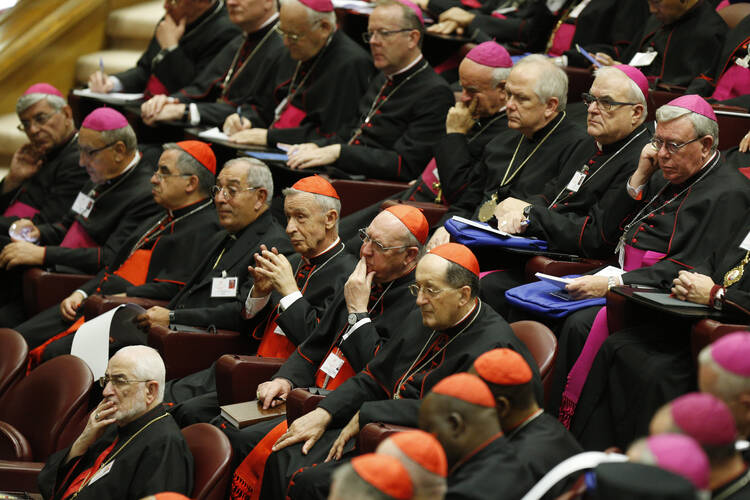 Cardinals and bishops attend the opening session of the Synod of Bishops on young people, the faith and vocational discernment at the Vatican Oct 3. (CNS photo/Paul Haring)

On the first morning of the synod on young people, speakers from different continents offered “a world perspective” on the situation and reality of young people, Thomas Rosica, C.S.B., the chief executive of Salt and Light Television in Canada, told journalists on Oct. 4. Topics included the plight of migrants, the need for a listening church, the credibility of the church and the abuse scandals that call its credibility into question.

Twenty-five synod fathers (almost all cardinals and bishops) spoke this morning. So, too, did a young woman from Texas, Sister Briana Santiago, 27. She was the first young person to speak at the synod; she had already participated in the pre-synod meeting last March. Born into a Catholic family, she is in a process of discernment of vocation for the religious life and studying at the Pontifical Lateran University, she said. Speaking in Italian, she told the assembly: “We young people are on a quest: looking for the meaning of life, looking for work, seeking our path or vocation in life, in search of our identity.... We dream of security, stability and personal realization...and finding a place in which we can have a sense of belonging.”

Paolo Ruffini, the new prefect of the Vatican dicastery for communications, listed some of the main topics raised in this morning’s plenary session. One was the question of “the discarded” young people: “The fact that so many are discarded today is a paradigm of the societies in which they live, and the need to change this paradigm.”

Speakers from different continents offered “a world perspective” on the situation and reality of young people.

Their dramatic situation was highlighted at the press briefing by a bishop from Argentina, Carlos Tissera, 67, who spoke about this subject at this morning’s session. He cited the situation in Buenos Aires, where so many young people live in “situations where poverty, violence and drugs are everywhere” and whose destiny is often “the prison or the cemetery.” It is necessary to hear “the silent cries” of these young people, he insisted. He said pastors would do well to follow the example of the Argentinian bishop Enrique Angelelli, of the Diocese of La Rioja, who was killed in August 1976 for his work among the poor and oppressed during the military dictatorship. He said the bishop, whose cause for canonization is underway, had always insisted that one should carry out one’s pastoral ministry “with one ear to the people and the other ear to the Gospel.”

“One should not be afraid of young people, they are a blessing to humanity and to the church,” Bishop Tissera said.

Mr. Ruffini said other topics raised by speakers today included “the credibility of the church” and the need for the church to listen to the young, “not as a strategy but for theological reasons,” and to ask forgiveness for the times when it was not up to the mark in responding in various areas, including sexual abuse. No less than six of the 25 synod fathers raised the question of abuse, some in forthright terms. Australian Archbishop Anthony Fisher of Sydney used his speech at the Synod of Bishops to formally apologize to young people for all the ways the Catholic Church and its members have harmed them or let them down.

“One should not be afraid of young people, they are a blessing to humanity and to the church.”

In the presence of Pope Francis, he apologized “for the shameful deeds of some priests, religious and laypeople, perpetrated upon you or other young people just like you, and the terrible damage that has done.”

He apologized “for the failure of too many bishops and others to respond appropriately when abuse was identified, and to do all in their power to keep you safe; and for the damage thus done to the church’s credibility and to your trust.”

Mr. Ruffini said the most powerful speeches were given by synod fathers from countries that produce migrants due to situations of war or poverty. The most emotionally powerful of these came from a bishop from Asia. Father Rosica said he hoped the figures regarding migrants would be released to the press and even some of these speeches.

Right now, the only speeches made available to journalists by the synod’s communications office are the ones from the young people who speak and the formal talks from the relator general and the secretary of the synod. Both Mr. Ruffini and Antonio Spadaro, S.J., the secretary for the information commission, explained that the reason why the names of the speakers and a summary of their texts are not released is to ensure that people can speak with maximum freedom in the synod. Mr. Ruffini noted that any synod father was free to give his speech to the media, but it was his decision. Journalists, nevertheless, objected that the limited information given in the briefings, where only the main themes are presented, reduces considerably the possibility of properly reporting what is happening inside the synod.

The most powerful speeches were given by synod fathers from countries that produce migrants due to situations of war or poverty.

Chiara Giaccardi, a sociologist and one of the experts working with the secretariat of the synod, was the only woman on the panel facing the press at today’s briefing. She admitted to being “most surprised” by “the frankness”—what Pope Francis calls “parrhesia”—with which the synod fathers spoke this morning.

“They didn’t use rhetoric or sweet language,” Dr. Giaccardis said, and several “spoke with emotion.” She noted “a climate of very frank and authentic communication” and said many of the 34 young people present, who are seated together at the synod, expressed their appreciation for different speeches with applause or vocally. This “is a good signal,” she said. She described what she had seen this morning as “a Copernican revolution” because the church is in an attitude of listening, not just speaking, as Pope Francis has asked.

Mr. Ruffini said other topics included “affectivity and sexuality,” “vocation,” “the family as a place for the transmission of the faith” and “how young people live their religiosity, not in terms of exclusion but of a religion open to dialogue.” They also spoke about “the prophecy of young people toward the future and their capacity to look to the future and the need for the church to know how to listen.”

Pope Francis at synod: “A church that does not listen...cannot be credible” to young people
Gerard O’Connell

A young Vietnamese man, Joseph Cao Huu Minh Tri, who is an auditor at the synod, also spoke at the press briefing and emphasized the need for passion in life. But he said some people “can’t find a passion”—they cannot even find jobs, while others “find the wrong passion.” He said he found the synod inspiring and felt it “can inspire young people, especially through the church’s social teaching with its focus on human dignity, the common good, solidarity and subsidiarity.”

The prefect of the Vatican’s communications dicastery broke the news that the synod, in its first vote, elected five members to the information commission, one from each continent: Cardinals Gérald Lacroix (Canada), Wilfrid Napier (South Africa), Christoph Schönborn (Austria), Luis Antonio Tagle (Asia) and John Fisher (Australia). But it was revealed during the press briefing that the synod had actually elected Cardinal Robert Sarah for Africa, but he turned down the election “for personal reasons,” and so Cardinal Napier, who came second in the vote, took his place.

At the press briefing, Bishop Tissera from Buenos Aires said synod participants are “greatly encouraged” by the fact that “Pope Francis is present at the plenary assemblies and joins them in the coffee breaks and talks to them freely.” He shows that the synod is indeed “a walking together,” not just of the synod fathers but also of the young people who are present.

Again, there is no more credibility for a synod with no women's votes than there would be for a synod with no black people allowed to vote. Dump the hate Pope Francis and the distrust of women, and then your synod will start to be worth listening to. Right now, as a matter of principle, I don't care what you talk about.

Why the statement " the hate Pope Francis" ?

Yes we are losing young people in poor countries and poverty but we are also losing young people in America even the young who have attended Catholic Schools and Universities. . Bishops and Pastors together need to follow the Missionary zeal of Pastor Enrique Angelelli. Visit and Socialize where young people gather outside the Church setting to gain their Trust. Listen and not preach and you will see the goodness in their hearts. The lost young are the Zachariah’s waiting for guidance and invitation from the Church.

Evangelizing the church hierarchy is a top priority. The flock needs to take its mission seriously. Credibility is eagerly waiting to return.

The head picture is the best proof that high clergy has become for long a heap of self inflated bellies. No more synods of bishops and cardinal.alone. no more.of these rats lost in their schemes. All of you: get out of MY church , roten depraved and destitute nomen of nogod.

Let us show our total support to our courageous Pope Francis. He id clearly a fighting man to rebuild our Church

The head picture is the best proof that high clergy has become for long a heap of self inflated bellies. No more synods of bishops and cardinal.alone. no more.of these rats lost in their schemes. All of you: get out of MY church , roten depraved and destitute nomen of nogod.

Let us show our total support to our courageous Pope Francis. He id clearly a fighting man to rebuild our Church