Synod preview: Chinese bishops “now on the way,” cardinal pushes back on criticisms from Chaput 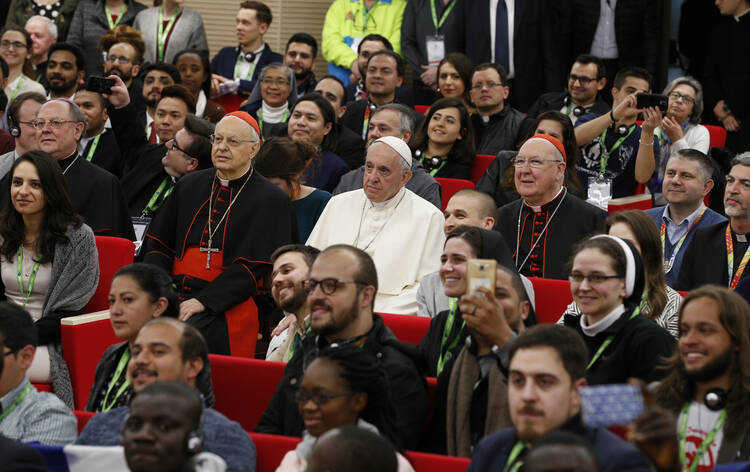 Cardinal Lorenzo Baldisseri, secretary-general of the Synod of Bishops, Pope Francis and Cardinal Kevin Farrell, prefect of the Dicastery for Laity, the Family and Life, pose for a photo during a pre-synod gathering of youth delegates in Rome March 19. A new document from the International Theological Commission explores the pope's call for the church to be "synodal" and emphasizes the role of the laity in the mission of the church. (CNS photo/Paul Haring)

Italian Cardinal Lorenzo Baldiserri, the secretary general of the synod, announced this at a press conference at the Vatican, Oct. 1, chaired by Greg Burke, the director of the Holy See press office, at which the chief-rapporteur (“relator general”), Brazilian Cardinal Sérgio da Rocha, outlined how the process will work.

Cardinal Baldisseri said 181 of the “synod fathers” were “elected” by some 130 bishops’ conferences worldwide, and Pope Francis named another 41 participants. Fifty synod fathers are cardinals. Other participants were elected by the male branch of the Union of Superiors General. Forty-nine men and women “auditors” will participate but do not have a vote, though they have the right to speak in the plenary assemblies and in the 14 small working groups. Thirty-six auditors are women, and 34 of them are young people (male and female) between the ages of 18 and 29. No less than 23 experts will also attend.

The two bishops from mainland China will be among the 268 “synod fathers” that have a right to vote in its deliberations.

He said the young people have been chosen in various ways: Some work in pastoral activity with young people; others belong to new Catholic movements—the Focolare, Sant’Egidio, Emmanuel and Communion and Liberation. The majority come from continents other than Europe.

He confirmed that for the first time in the history of the synod of bishops, which Paul VI established in accordance with the wish of the Second Vatican Council (1962-65), two bishops from mainland China will participate in a synod. “They are now on the way,” he added. In the past, popes had invited Chinese bishops to attend synod gatherings, but they were not allowed to do so. But the situation has changed following the signing of the provisional agreement between the Holy See and China, and “now all the bishops in China are in communion with the pope.” When Pope Francis invited two bishops from the mainland, the Chinese authorities gave them clearance to attend.

Cardinal Baldisseri noted that the synod’s working document, known by its Latin title, “Instrument Laboris,” has integrated the reports from events organized by the synod secretariat, including an international seminar on the condition of young people (September 2017), the international pre-synod meeting held in the Vatican, which brought together 300 young people from all continents in March 2018, and the input of some 15,000 online survey takers.

Archbishop Charles Chaput has criticized the synod working document in articles published in the United States and Italy.

When it was pointed out to him that “some people have criticized the working document,” Cardinal Baldisseri said “only one” bishop did so, and he expressed his criticism based on an article by “an anonymous theologian.” Though the cardinal did not mention the bishop’s name, journalists present understood he was referring to Archbishop Charles Chaput, who has criticized the preparatory document in articles published in the United States and Italy. The cardinal left no doubt that he was referring to the archbishop of Philadelphia when he went onto state that “this bishop was a member of the council of the synod,” the body elected by the previous synod to oversee its implementation and prepare for the next synod. “He was present at the meeting when this document was approved, and he raised no objection then, even though he had the opportunity to do so.”

One journalist noted that during his visit to the Baltic states, Pope Francis said that young people were scandalized by the sexual abuse and financial scandals in the church and asked if the synod would address this. Cardinal Baldisseri said the synod would explain and show to young people that “the church is not represented by those who do wrong.”

Cardinal Baldisseri recalled that the synod working document is divided into three parts, and the synod will likewise have three “work units”: Part I, “Recognizing: The church listens to reality”; Part II, “Interpreting: Faith and vocational discernment”; and Part III, “Choosing: Paths of pastoral and missionary conversion.”

Cardinal Baldisseri said the synod would show to young people that “the church is not represented by those who do wrong.”

Cardinal Sergio da Rocha, who as relator general has the main role in guiding the synod’s work, explained that is structure is based on “the style chosen of walking together: discernment.” There is no “pre-arranged” outcome or solution, he said. “The synod [participants] walk together in a dynamic of discernment,” which involves “three precise attitudes.” The first means “to keep one’s eyes and ears open but also one’s mind and heart” so as not to miss any sign of change that is underway. The second involves “a good path of discernment, that is to evaluate in the light of the faith that which is moving in the life of the church and of the world and in the interiority of each of us.” The third requires “the willingness to stop at the wounds of history with a heart full of mercy, keeping the doors open to the God of tenderness who continually acts in his people and makes himself present through the voice of the little ones and of the poor.”

The cardinal said that “to enter in this way into the process, in an ecclesial way, is already a first pastoral response of a church that desires to be credible for the young generations.”

He said this process is linked three parts of the working document. Part I of that document involves “starting, in the light of the faith, from the concrete reality of young people to highlight what are the appeals and the questions that God is asking his church today.” Part II focuses on “interpreting” the reality of young people today “enlightened in a framework that is biblical, anthropological, theological and ecclesiological, pedagogical and spiritual.” Part III involves “choosing,” and here “the church is called to take a position, to make courageous choices, even risky ones, to create the conditions for an authentic pastoral, spiritual, and missionary renewal of the church.”

Why we still need a synod on youth
Katie Prejean McGrady

Cardinal Baldisseri said the first week of the synod will be held in plenary assembly and focus on Part I. At the beginning of each plenary session a young person will address the assembly, and then the synod fathers will each be able to speak for five minutes. Once all those who wish to speak have given their input, the participants will divide into 14 working groups, organized according to six different languages (English, Italian, Spanish, Portuguese, French and German), and will work on amendments and propositions to the working document.

At the end of each phase of the work units, the relator general will integrate the speeches, the reports of the working groups and the amendments/propositions into a provisional working document, on Oct. 9, 15 and 22, respectively.

After receiving the reports from the working groups on all three parts, the drafting commission will work on the final document and will present a first draft text to the plenary assembly for comments or amendments on Oct. 24. Subsequently, it will decide how to integrate the feedback from that last session and then present the final document to the plenary assembly for a vote on Oct. 27.

Cardinal Baldisseri announced that there will be briefings after each day’s sessions and a weekly press conference.

In defense of my bishop, below is the link to the critique of Instrumentum Laboris. 4 concerns:
1. Naturalism - focus on socio-cultural elements, to the exclusion of deeper religious & moral issues
2. An inadequate grasp of the Church’s spiritual authority
3. A partial theological anthropology – fails to make any mention of the will. The human person is reduced in numerous places to “intellect and desire,” “reason and affectivity”
4. A relativistic conception of vocation (and the meaning of objective holiness).
Other than that, everything else was fantastic.

This new organization is promising: Better Church Governance has signed up former FBI agents as investigators, led by Phil Scala, a former FBI Supervisory Special Agent. Academics, lawyers and editors will help to draw up a dossier, “The Red Hat Report”, which will cover all cardinals able to vote in the next papal conclave – that is, those under the age of 80.
It aims to increase transparency and honesty in Church governance, to “empower members of the Church to courageously stand up for the truth”, and to help the cardinals themselves.
http://www.catholicherald.co.uk/news/2018/10/01/ex-fbi-agents-to-help-investigate-cardinals-on-abuse-and-corruption/

Glad that the PRC now has two votes on internal Church affairs. Why not just directly invite some high level ministers on Chinese Culture or Enemies of the State. Glad the Pope "stood up" to these guys....but maybe he should have taken a page out of JPII's book on how to deal with Communism and the Chinese thugs who persecute true Catholics in China. We all should pray for the poor idiots in China who refused to countenance the "Chinese PRC" Catholic Church. They should have known they would have been thrown to the wolves by the "principled stalwarts" of the Church.

Glad that the PRC now has two votes on internal Church affairs. Why not just directly invite some high level ministers on Chinese Culture or Enemies of the State. Glad the Pope "stood up" to these guys....but maybe he should have taken a page out of JPII's book on how to deal with Communism and the Chinese thugs who persecute true Catholics in China. We all should pray for the poor idiots in China who refused to countenance the "Chinese PRC" Catholic Church. They should have known they would have been thrown to the wolves by the "principled stalwarts" of the Church.

The Washington Post in an article on October 2, 2018 described Archbishop Charles Chaput of Philadelphia as being "conservative." As a member of Archbishop Chaput's flock, I disagree with the use of the terms " conservative " or "liberal" to describe Catholics. As my late Dad pointed out, those are political terms, and I believe that the mark of being a good Catholic is to follow the teachings of Jesus as interpreted by the Church, which Jesus assured all that "the gates of hell will not prevail against it"