Abuse crisis is like a fire purifying the church, says head of Canadian bishops 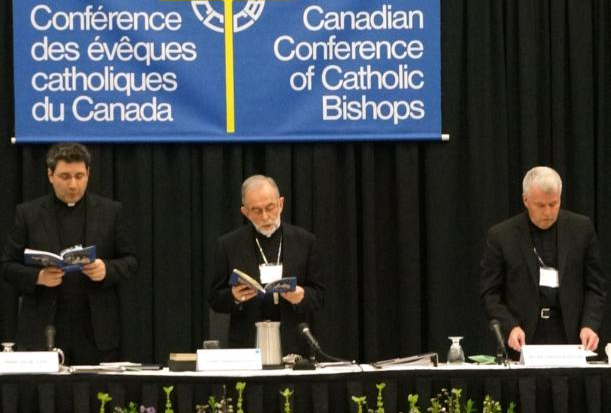 CORNWALL, Ontario (CNS) -- The sexual abuse crisis is like a fire that should be left to burn to purify the church, said the president of the Canadian bishops' conference.

"When there is a fire, our first instinct is often to try to put it out to prevent damage," said Bishop Lionel Gendron of Saint-Jean-Longueuil, Quebec. He spoke Sept. 24 to more than 80 bishops and eparchs at the annual plenary meeting of the Canadian Conference of Catholic Bishops.

"In this case, however, we may need to allow this fire to keep burning," he said.

"When there is a fire, our first instinct is often to try to put it out to prevent damage. In this case, however, we may need to allow this fire to keep burning," Bishop Lionel Gendron said.

Bishop Gendron reminded the bishops of St. Paul's words, "It is better to expose works of darkness and bring them to light."

"The fire burning in the church today may appear to be out of our control and, in some cases, consuming that which we hold dear," Bishop Gendron said. "But as it blazes with brightness, it is cleansing and purifying, and thereby casting light on things until now hidden in darkness."

During the five-day plenary, the bishops were to receive updated guidelines on protecting minors from sex abuse. Bishop Gendron called the guidelines a "milestone" in the prevention of clerical sexual abuse. The document will be released publicly Oct. 4.

"As missionary disciples and successors of the Apostles, we must stand with those of our flock who are wounded."

Archbishop Anthony Mancini of Halifax, who headed the ad hoc commission that began developing the new guidelines in 2011, said he does not believe parts of the document may already be obsolete in light of recent revelations of abuse and coverups involving bishops. Titled "Protecting Minors from Sexual Abuse: A Call to the Catholic Faithful for Healing, Reconciliation and Transformation," the document does not specifically address bishop accountability.

But Archbishop Mancini said it defines clergy as bishops, priests and deacons, so bishops are included. It addresses the issue of clericalism and the inappropriate ways bishops responded to abuse allegations in the past, he said.

On Sept. 19, the U.S. bishops' conference announced the creation of protocols to hold bishops more accountable for their actions and inactions. These will include establishment of a third-party reporting system to receive confidential allegations of inappropriate conduct and the development of a code of conduct for bishops.

The Canadian bishops do not seem to be following that path. Archbishop Mancini said the procedures in Canada will remain the same as those that governed the 2009 case of former Bishop Raymond Lahey of Antigonish, Nova Scotia. When Lahey faced charges of possession of child pornography, a call was made to the Canadian nuncio, and Lahey was subsequently reduced to the lay state.

Archbishop Michael Miller of Vancouver said the bishops may discuss the initiatives of the American bishops at some point, but he noted the vast differences in resources between the bishops' conferences in the United States and Canada. As for a hotline, that would require some mechanism for evaluating and investigating complaints, he said.

The CCCB has no authority to force a bishop or anyone to abide by the document, but in a significant departure from the past, each bishop will pledge to implement these guidelines in his diocese, Archbishop Mancini said.

"If anyone chooses to ignore it, they'll do so at their own risk," he said.

"It's not just a question of new rules, but of the renewal of minds and hearts and spirits, of conversion"

The Canadian bishops' first sex-abuse document of 26 years ago, "From Pain to Hope," was a reaction to the scandals of sexual abuse, Archbishop Mancini said. The new document is more proactive. It looks at "how can we protect children," he said. "It's a big shift.

"It's not just a question of new rules, but of the renewal of minds and hearts and spirits, of conversion," the archbishop said.

The new document also deals with the culture of secrecy, power and the desire to protect the church's image, he said.

Although the document deals with minors and vulnerable adults, seminarians are not included in the vulnerable adult category, Archbishop Mancini said. Engaging in inappropriate sexual relationships with seminarians was an allegation made against U.S. Archbishop Theodore McCarrick, who was recently removed from the College of Cardinals.

The new document is a call for healing, purification and a fundamental change in the church for deeper conversion, he said.

Archbishop Mancini said the sexual abuse crisis could not be attributed to homosexuality in the priesthood any more than it could be attributed to the rules for clerical celibacy. While homosexuality may be involved in some cases, the issue is far more complex, he said, noting most sexual abuse takes place in families and involves heterosexual men.

Most offenders are indeed men, majority hetero. And indeed, in environments where there is a "supply" of boys (there is no other way to describe how abusers see their prey), boys will be victims.

Abuse is about power, control, and supply. From experience of three abusers, none were "into me," they werent intimate, it was just being used and discarded afterwards