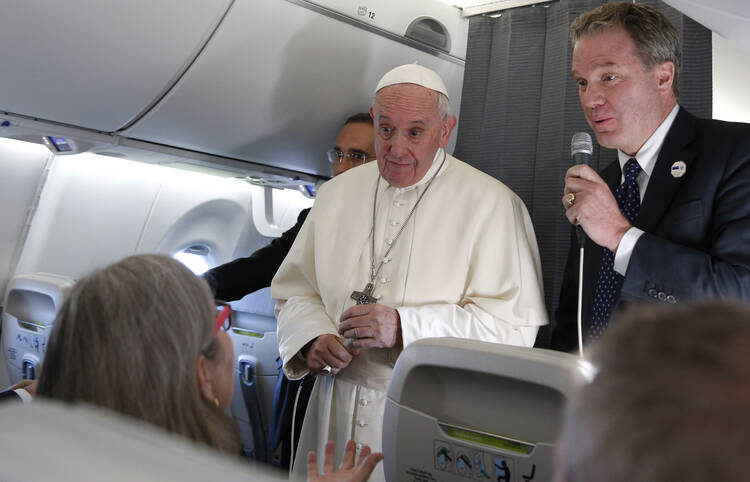 Pope Francis answered questions on the abuse scandal and the recent provisional agreement with China in a 57-minute press conference on the three hour flight from Tallinn to Rome on Sept. 25. But he devoted most of the time to questions relating to his recent visit to Lithuania, Latvia and Estonia, and sharing his reflection on the situation in those countries, which he said “need our help.

Referring to the sexual abuse scandal in the church, it was pointed out that in his meeting with young people in Tallinn, the capital of Estonia, he said they are troubled by the sexual abuse and financial scandals in the church, and the church’s failure to respond with clear condemnation. It was noted that a new report has been published in Germany on how the church dealt with sexual abuse. What did he have to add on this?

He said: “We all know the statistics…but if only one priest were to abuse a boy or a girl, it is monstrous, because that man was chosen by God to bring children to heaven. I understand that young people are scandalized by this corruption. It is necessary [for the church] to bring people to God and not to destroy them.”

If only one priest were to abuse a boy or a girl, it is monstrous, because that man was chosen by God to bring children to heaven.

”Is the church not doing what it should to clean up this corruption?” he asked. Referring to revelations emerging from an exhaustive Pennsylvania grand jury report, Pope Francis noted that there “we see that in the first 70 years there were many priests who fell into this corruption, but in more recent times the number had decreased because the church understood it had to fight [the abuse] in a different way, and it has put everything into it [the fight] and it has done a lot.”

'America' on the Abuse Crisis: A selection of our coverage
Maurice Timothy Reidy

He noted that in the past the church has covered up abuse, just as abuse is covered up in families. “They covered up because it was a very big shame. It was the way of doing things in past centuries,” said the pope.

Then, referring to the advances made in the church in combating abuse, Francis said he has never offered pardon after a final verdict has resulted in conviction. “In recent times, I have received many, many condemnation [of abusers] from the Congregation for the Doctrine of the Faith, and I say go on,” said the pope. “I have never, never given a pardon on a conviction.”

These comments only underscore how very clueless the Pontiff is on the issue. He says nothing new. Benedict and JP II, you can say, were co-conspirators. He allows Mahony to wear the red hat. Radical change is necessary. Sadly, his growing lack of credibility on this issue of child rape diminishes his influence on other important issues, like Laudato Si. Let's just sit back and wait for resignations of corrupt bishops, and continue fingerprint grandmothers who wish to volunteer in parish ministry. The hypocrisy continues.

The code of silence.

I don't get it ( and I don't think the Pope gets it either!)--he repeatedly says that even one abusive priest is "monstrous", as he does here, but then falls back on the same old cliche--"but look guys we're not abusing as much as we used to, things are getting better..."! Does he really naievely believe that this abuse crisis is fading and will soon be over? And then he insults families by saying that their shame for familial abuse is the same as the RCC's "shame" for covering up--when we all know that bishops and cardinals have covered up to protect the reputation of their institution--and showed not the least bit of shame for doing it! I grade this particular news conference "F". No wonder the "young people are scandalized by
incoherence". Sometimes Francis it is better to leave people wondering
why you didn't open your mouth than wondering why you did, as someone once famously said.

It was never acceptable for Christians to sexually abuse children. Priests were supposed to live by a vow of celibacy. I am in sheer disbelief that the leader of the Roman Catholic Church could utter such nonsense with regard to Priests sexually abusing children. There is a real and growing threat to our religion.

In case anyone wonders what the popular press made of this statement, search for "Pope says church judged unfairly on sex abuse". This is the headline that the world is reading with regard to the Pope's statement quoted above.