Wuerl to meet with Pope Francis about resignation 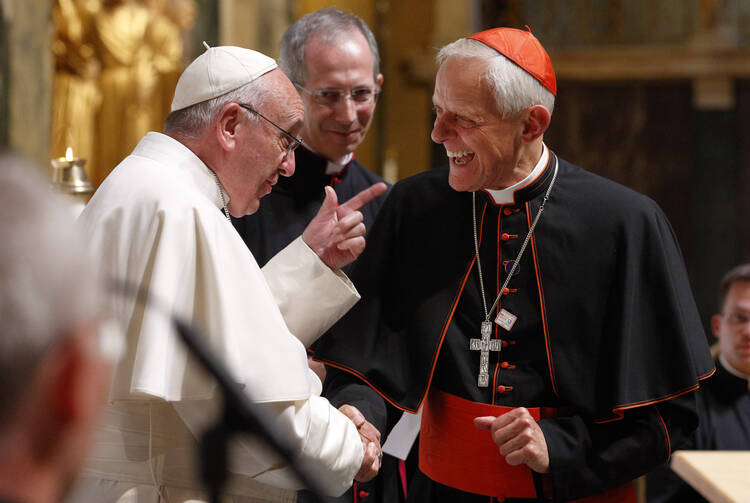 Pope Francis talks with Cardinal Donald W. Wuerl of Washington during a meeting with U.S. bishops in the Cathedral of St. Matthew the Apostle in Washington Sept. 23, 2015. (CNS photo/Paul Haring)

Cardinal Donald Wuerl, the archbishop of Washington who has for weeks endured calls to step down following accusations that he mishandled cases involving priests accused of sexual abuse while bishop of Pittsburgh, said on Tuesday that he plans to discuss his resignation with Pope Francis “in the very near future.”

In a letter distributed to priests in the archdiocese, the cardinal notes that he submitted a letter of resignation to the pope nearly three years ago, when he turned 75, as required of Catholic bishops.

“At issue is how to begin effectively to bring a new level of healing to survivors who have personally suffered so much and to the faithful entrusted to our care who have also been wounded by the shame of these terrible actions and have questions about their bishop’s ability to provide the necessary leadership,” the cardinal wrote in his letter.

Cardinal Wuerl, who as a member of the Vatican’s Congregation for Bishops is one of the most influential cardinals in the church, met with priests in Washington at an annual Labor Day picnic where he discussed the ongoing sexual abuse crisis in the church. That meeting came after he spoke with Pope Francis during a visit to the Vatican earlier this summer. Pope Francis told the cardinal to consult with his priests before making decisions about his future.

“Our discernment here, I believe, has indicated the way forward to bring healing and a new beginning at the service of this Church. I am particularly grateful for your patience and respect for this time of discernment,” the cardinal wrote in the letter.

While he has defended his record, arguing that he removed priests accused of sexual abuse of minors from ministry in Pittsburgh, the cardinal has previously acknowledged that in other cases, he came up short. His record as bishop of Pittsburgh, a post he held from 1988 until his appointment to Washington in 2006, was detailed in a more than 800-page grand jury report released earlier this summer by Pennsylvania’s attorney general. The release of the report added to the questions Cardinal Wuerl faced about his handling of sexual abuse, with some critics suggesting that he had known about allegations of sexual harassment and abuse leveled against his predecessor, Cardinal Theodore McCarrick. The cardinal denies that he had prior knowledge of those claims.

Since the release of the Pennsylvania report, the cardinal has faced calls to step down, including protests by victims advocates in front of the Cathedral of Saint Matthew, Catholic school teachers and even from a deacon who serves as master of ceremonies at the Washington cathedral who refused to serve alongside him.

The PA Grand Jury Report showed Wuerl to be a hypocrite and a liar.

* Wuerl gave serial abuser Fr. Paone letters of recommendation and refused to issue a sworn statement about what he knew of Paone's history (or lack thereof) of child sex abuse when requested by the insurer of another diocese.

* Wuerl paid off convicted child molester Fr. Zirwas in exchange for his silence about other criminal sex abuser priests. The archdiocese then lied to reporters, saying that canon law required them to pay the laicized priest. After Zirwas' murder by his gay prostitute lover, Wuerl unlaicized him and then spoke glowingly of him at his funeral: a child predator who died in a state of mortal sin, having been murdered by a gay prostitute after a lifetime of abusing minors!

Americans have lost their soul and sadly decades ago. The presidential election, twice, of Bill Clinton was the beginning of the collapse of America much like the Jews turned their backs on YHWH for a golden calf. Americans are fed by scandal, crisis, dysregulation and unbridled passions, preceded all by the worst of all sins: pride. Cardinal Wuerl has shown holiness in his crucifixion by EWTN and conservatives. The Church is comprised of sinners and saints, and can only be as efficient as its weakest links. America is the weakest link and millstone in the Catholic Church. Sodom and Gomorrah look good compared to the colossal mess that is the black hole of the USA. Thank you Cdl Wuerl for your amazing life of service to the smelly and ungrateful sheep. Your reward is in heaven. Pray for us

“Former U.S. Attorney: Cardinal Wuerl’s record reflects effort to “prevent, expose, and remedy abuse”
“Media coverage following the recent release of the Pennsylvania Grand Jury report “does not accurately reflect” Cardinal Donald Wuerl and the Church’s efforts to protect young people, said a former U.S. Attorney for the Western District of Pennsylvania who worked closely with then-Pittsburgh Bishop Wuerl on that diocese’s child protection efforts.”
“What I can say with complete confidence is the following: I believe Cardinal Wuerl to be a committed man of God with unquestioned compassion and commitment to young people,” said Frederick W. Thieman, the former U.S. Attorney. “My opinion of the man is based upon a decade of working with him in a number of capacities. The media coverage I have seen does not accurately reflect the person I came to know over that time.”

During his four years in office, he oversaw an office of 42 attorneys and was instrumental in establishing a youth crime prevention effort in that state’s Allegheny County. He also served on the Diocese of Pittsburgh’s child protection lay review board.

“I do think shedding light on the abuses of the past can prevent a repeat of these horrible tragedies,” Thieman said. “It is much more important to prevent abuse than simply to expose it. From my experience, there has been a dedicated effort in recent decades to prevent, expose and remedy abuse of young people.”
http://www.cathstan.org/Content/News/News/Article/Cardinal-Wuerl-s-September-11-Letter-to-the-Priests-/2/2/8716

It is expected that Cardinal Wuerl will resign and Pope Francis will accept his resignation. This is the right thing to do.

I hope this will set an example for other Bishops and Cardinals that covered up clergy sexual abuse in Pennsylvania (and elsewhere) to resign as well. Frankly, we need to cleanse the Church from Priests/Bishops/Cardinals who have committed immoral sexual behavior, sexual abusive crimes, gross negligence, coverup, or are guilty of turning a blind eye to, or to minimize or withhold legitimate sexual abuse evidence from the Church or Civil authorities.