Addicts and their loved ones talk about life with opioid addiction 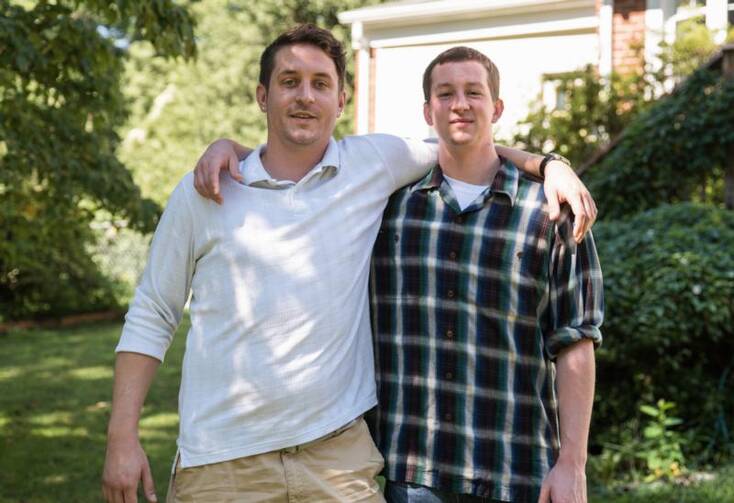 Recovering addicts Brian Peck and Dan Buckley stand in the backyard of the sober living home Sept. 6 in Annandale, Va., where they currently live. (CNS photo/Zoey Maraist, The Catholic Herald)

ARLINGTON, Va. (CNS) -- It was a Saturday night, and Billy was eating pizza and watching a sporting event in the basement bedroom of his residence, a "sober living" home.

He called his mom, Judy, to chat and confirm that they would attend Mass together the next day. As he hung up the phone, he told his mom he loved her. "I love you, Billy," she replied.

A few days later, Judy awoke in the middle of the night to a call from the police. "William is deceased," they told her. Judy would learn later that he died of an overdose -- heroin laced with fentanyl. She fell to the floor and laid there for a long time.

Billy was 13 years old when he started using marijuana. When his parents found out, they decided to take him to counseling. But he continued drinking and using drugs. His parents quickly entered a world they knew very little about.

Billy's problem scared his parents, and Judy felt she couldn't talk about it. Even when Billy died in March at age 34, not everyone in her life knew he was an addict.

"It was humiliating, devastating and we lost friends because of it. It's a family disease," said Judy. "How many mothers have a child under their heart for nine months and think he's going to be an addict?"

Dan Buckley was a frequent drug user when he tried prescription opioid drugs for the first time. The high was unlike anything he had experienced before.

"(It) was the feeling I had been chasing since I started smoking pot," he said. "It was a feeling of all problems (going) away. It was a physically and mentally numbing substance."

Buckley then took opioid painkillers occasionally and became hooked after he got into a car accident. The doctors prescribed pain medication to cope with his broken ribs and cut spleen. Eventually, he turned to a cheaper version of the drug -- heroin.

"If you get to that point in your life when you're doing heroin, there's going to be a moment where you sit by yourself and say, 'I'm doing heroin. As a kid, did I really think I was going to end up doing heroin?'" asked Buckley. "I was raised in a great household and I was putting needles in my arm. Something didn't add up, but I couldn't stop."

Most people using heroin want to get clean, said Brian Peck, an Alexandria native. But it's tremendously difficult. "When you're using, you feel like the world is going to end if you can't get your hit," he said. "You become completely apathetic about every other thing in life."

"(Opioid addicts are) not controlled by their minds, they're controlled by a substance," said Buckley. "I've done every drug pretty addictively and nothing compares to the hold that heroin has."

Both men were able to detox while serving time in jail for drug-related charges. "I've gone through some bad stuff in my life and going through heroin withdrawal tops it," said Peck. "It's very painful. There's like 20 symptoms and all of them are awful."

But it took more than a detox for them to stop using. They had to decide that they wanted to stay clean.

"I hated the person I turned into -- I became a complete monster," said Peck. "Stealing and being homeless was not how I wanted to live my life. Or addicted, waking up every day needing to get something to feel better."

But it took more than a detox for them to stop using. They had to decide that they wanted to stay clean.

Once he made the choice to change his life, Peck began attending Bible study. When he was released from jail, he went to rehab. Now, Peck and Buckley reside in a sober living home in Annandale.

While Peck was using drugs, his mother took out a protective order against him. Now that he's sober, he sees her all the time. "We hang out and every time she sees me she smiles and we laugh and it's literally the best feeling in the world," he said.

"With opioid addiction, as well as any other addiction, the best thing you can do is love somebody. Just relentless love, caring and offering to help," said Buckley. "But when it comes down to it, it's got to be their choice. They have to want it. And there's ways that you can show them it's possible."

Both men have friends who have died from overdosing. Most of their former housemates are using drugs again. But they know it's possible to live drug-free.

"My best advice is -- you can do it, nobody's stopping you but you," said Peck. "And it's going to suck. You feel like withdrawal is going to last forever. It's not. Life gets not only good again but it gets a million times better."

The Centers for Disease Control reports that U.S. drug overdose deaths continue to rise, with the increase fueled by synthetic opioids. According to CDC statistics, drug overdoses killed 63,632 Americans in 2016. Nearly two-thirds of these deaths -- or 66 percent -- involved a prescription or illicit opioid.

On Sept. 29 the Arlington Diocese will host its first conference on the issue -- "Seeking Hope & Healing in the Midst of the Opioid Crisis" -- to look at how it is impacting families and how the church can address this crisis.

Judy prayed for years that her son Billy would stay clean. "I believed I was going to be one of those people to have my son back to me -- whole," she said.

God didn't answer that prayer, but Judy believes he gave her another miracle. Three weeks before he died, Billy went to confession for the first time in years.

"When my son walked out of there, he was giddy and joyful and happy. It was like everything was lifted off his soul," she said. "I think my son is in heaven with his father and I hope they're golfing."

After Billy's death, Judy thought she would try to forget about addiction. Instead, she answered a call in her parish bulletin to be a volunteer for Arlington's diocesan Catholic Charities Re-Entry Program for newly released inmates struggling with substance abuse.

"Maybe this will be what I can do to pay honor to my son," she said.