Synod on Youth preview: How will we keep young people in the church? 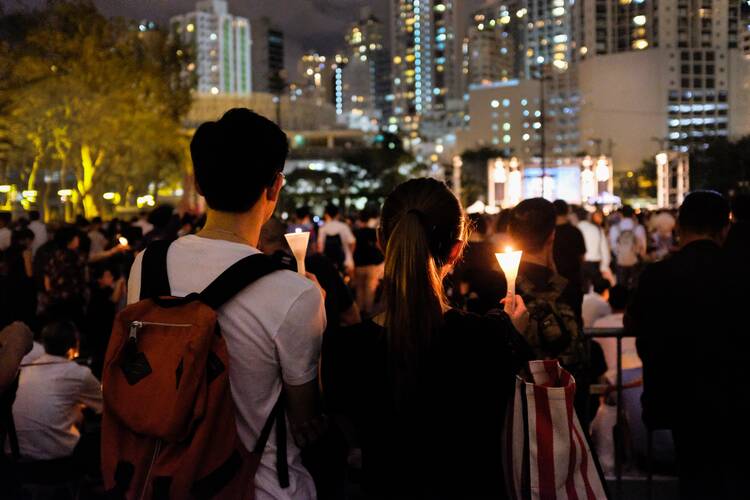 Photo by Vincent Chan on Unsplash

Next month, the Vatican will hold a meeting of the Synod of Bishops on young people. Earlier this year, in preparation for the October gathering, the Vatican hosted 300 delegates from around the world. These delegates met in Rome and produced an 11-page document, titled “Young People, The Faith and Vocational Discernment.” One of the delegates selected by the U.S.C.C.B. was Katie Prejean McGrady. She is a writer, podcaster, Catholic speaker and author of Follow: Your Lifelong Adventure with Jesus.

We talk to Katie about her work at the pre-synod gathering, how the sexual abuse crisis shows we need the synod now more than ever and what the church can do to keep young Catholics in the faith.

In Signs of the Times, thousands in India joined nuns of the Missionaries of Jesus congregation last week to call for the arrest of Bishop Franco Mulakkal, who has been accused of rape. We also discuss the latest updates to the U.S. sexual abuse crisis, including the launching of investigations into clerical sexual abuse in dioceses across the country.

States Round up of newly announced investigations into clerical sexual abuse

I think there are good reasons to postpone the Synod on Young People.

By next month, an investigation into the sexual abuse scandal (e.g., Grand Jury Report, McCormick and the Vigano letter) will not have begun, much less concluded with findings etc.

How will the Bishops answer questions on these recent revelations? Are they going to say: "We are going to investigate all of these accusations and hold priests/bishops/cardinals...and perhaps popes...accountable? How will that go over?

How will Bishops deal with the fact that the majority of young people disagree with most moral teachings of the Church (e.g., contraception) and they support same-sex marriage, women ordination, voluntary celibacy and marriage for priests, etc. Will they merely 'repeat' the same tired old teachings and rationale that have not been convincing?

Will the Bishops be preaching to the choir if most of the young people are faithful Catholics who abide by all moral teachings? I hope that the young people that will be attending represent a "realistic cross section of worldwide young Catholics".

Will the Synod on Young People only discuss youth ministry programs that worked in some parishes in terms of attracting young people and getting them into youth ministry? I encourage a discussion of these programs. However, the overwhelming majority of young Catholics do not attend weekly Mass. How will the Bishops deal with an outreach program to them? What will they say? Send a flyer to all families in the parish addressed to young people about a program for young Catholics and encourage them to come to the meeting on Tuesday at 7pm for more details?

I hope and pray that the Synod on Young People will be a success but the time of it should be postponed.

Why be a Catholic? Because there is a God. Christ is God and died to allow salvation. Christ set up a Way for salvation to happen. The "Way" is his Church and sacraments.

For the very small number of those who even care---- who even give a thought to these questions:
Leave the kids alone. Don't force water baptism on them. Give them Bibles and tell them to pray to God for help in understanding. Tell them they don't have to plod through the O.T. before reading the part that is directly to us today, i.e., the epistles of Paul.

To keep young people, change doctrines that harm women and LGBT people. Stop teaching that contraception is bad, that cohabiting is bad. Stop covering up sex abuse and get rid of the bishops/cardinals who have done it, stop lobbying against the relaxation of statutes of limitation, end mandatory celibacy.

The bishops should also stop supporting the distorted notion of "religious freedom" that is being pushed by the current administration. Religious freedom should be for those of ALL religions and none. The current definition implies that it is OK to discriminate against people who are not a certain type of "christian". Imposing christian beliefs on all is not supporting religious freedom. Permitting groups that are not specifically religious (pretty much limited to churches and schools), religiously affiliated organizations who offer their services to all, who hire based on expertise and knowledge and skills without regard to the employee's religion, should not be permitted to discriminate against those who don't share their religious beliefs.

In addition, they should oppose efforts to use taxpayer money to support religious schools.

The bishops should remember history and recall what it was like for Catholics when they were discriminated against.

That is why this Synod is a waste of time and money. The US bishops attending are all very, very conservative, with the exception of Tobin - Daniel DiNardo, Jose Gomez, Charles Chaput, Frank Caggiano, Robert Barron, and Joseph Tobin. Perhaps they don't reflect the characters of all the bishops attending. I don't know how they were selected. But if they are representative of the majority of bishops who attend, nothing will be accomplished.

One might note also that DiNardo is now involved in a case in Texas where he did not initiate a police investigation nor did he even suspend a priest after he personally spoken with two separate people who accused the priest having molested teens years earlier.

The youth who are attending probably are also largely "conservative", at least those from the US - handpicked for their conservative views.. If one reads the articles by Katie Prejean McGrady in America, and if she is typical of those picked to attend, these conservative bishops and conservative youth will simply be talking to themselves - an echo chamber and mutual admiration society. Ms. McGrady, who admires Chaput, is typical of a very small segment of Catholic young adults, and not at all representative of the views of the majority of young adult Catholics, even those who are still practicing..

But, as you point out, Mr. Chuchman, many, many young adult Catholics have already left the church, and even more are simply bound by family and culture, while rejecting many of the teachings. Whatever this group of self-selected conservative Catholics come up with in Rome, it will not bring back the disaffected.

Sad to say you are right and that includes the kids who graduate from Catholic High Schools. Priests need to be Missionaries not Administrators. There is no follow up on kids who receive their sacraments but then disappear from the Church. Pastors need to be Missionaries within their own communities. Attend Community functions like Parades and Festivals not just their own. Constantly remind kids in the community to attend their Church each Sunday. Priests need to be social and put on a human face not just to Catholics.

The church cannot keep anyone in the faith, but it can help the Holy Spirit do that.

How to keep young people in the Church? Let og of patriarchal gender ideology and focus on the basics:
- Jesus Christ is the Redeemer, God made flesh, not a patriarch
- The Church is the body of Christ, not a woman with a male head
- The nuptial mystery of Christ and the Church is not a patriarchal marriage
- The exclusively male priesthood is an ecclesiastical patriarchy, not a dogma
- The complementarity of man and woman is enabled by their consubstantiality
- Apostolic succession is contingent on redeemed flesh, not on masculinity
- Jesus Christ is the Priest/Victim, the Lamb of God, the Bread of Life, not the male of life
- Canon 1024 is vocational feminicide ~ Is the institutional church fully pro-life?

The reason many young people leave the Catholic Church has to do with truth. The more that gay people come out, the more that straight people see and realize that the inaccurate basis of its teaching and the outsized hostility to gay people, including firing them jobs and lobbying against CIVIL marriage, is unjust and wrong - going against the core beliefs of Jesus and the Church social justice teaching. Church teaching on contraception is a travesty; a Church commissioned group that included laity, supported contraception but Pope Paul dismissed their recommendations and forbade it. His reasoning was misguided; a loving family can share God's love with their children no matter the size. Large families like my parents, 10 & 6 children, are honesty unfeasible today unless a family is wealthy or live on a farm. Most families struggle with 2 or 3 children. Lastly, the sexual abuse cover up by the bishops. Good measures have been introduced to properly address current charges sexual abuse, however the lack of accountability for those in real power, the bishops, is a crisis - it's the old story of many organizations, like the banks that caused the 2008 financial collapse, were not punished while their employees and the rest of the society suffered the consequences. The Church needs to address these issues and I hope they do.

Unbelievable that the Vatican is going forward with this. Given the recent revelations, this synod sounds like a conference designed for priests to sexually molest minors. They should have the good taste to cancel it.

this can be now be the way to get the free xbox live codes online.