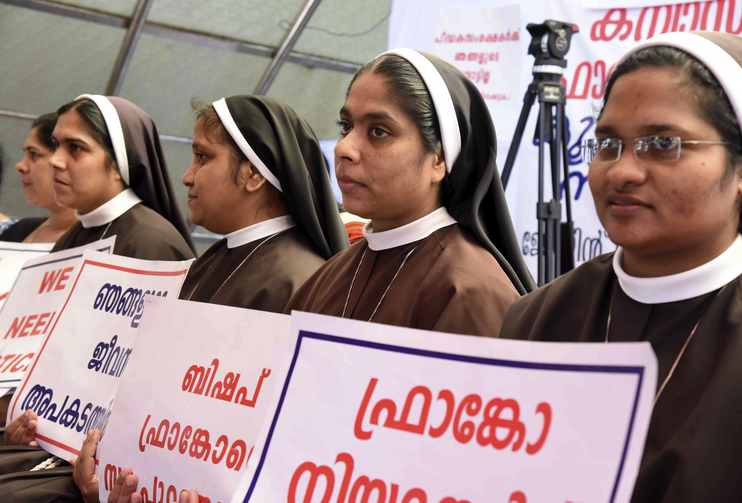 Catholic nuns hold placards demanding the arrest of a bishop who one nun has accused of rape, during a public protest in Kochi, Kerala, India, Wednesday, Sept. 12, 2018. (AP Photo)

KOCHI, India (AP) — A group of Catholic nuns is holding a public protest in south India, demanding the arrest of a bishop whom one nun accused of rape.

The nuns, members of the order the Missionaries of Jesus, began their protest last week, gathering with dozens of supporters along a crowded street in Kochi, a coastal city in the Indian state of Kerala. India is overwhelmingly Hindu but Kerala has a large Catholic population.

"The church has not given us justice," one of the nuns, Sister Anupama, told the Times of India newspaper over the weekend. "It was the church which forced us onto the street."

Ending Religious Violence in India
From AP, CNS, RNS, Staff and other sources

The protest follows a June complaint to police by a Missionary of Jesus nun who accused Franco Mulakkal, bishop of the city of Jalandhar, of repeatedly sexually abusing her in 2014-2016.

The bishop has denied the accusation, saying the nun was angry because he had earlier ordered disciplinary actions against her.

Police questioned Mulakkal in July. He has not been arrested.

Good for them! One of the (many) dirty little sex secrets in our church is that, in the developing world, religious women are seen as nothing more than chattel: expected to submit to the sexual depravity of clergy who consider sexual abuse of religious women their "right." This phenomenon is particularly acute in Africa—where some Bishops have come to the defense of clergy convicted of serial rape. Tragically, this behavior is simply a reflection of societal standards.

This article also appeared in print, under the headline “In India, a bishop is accused of rape and the church of inaction ,” in the October 1, 2018, issue.