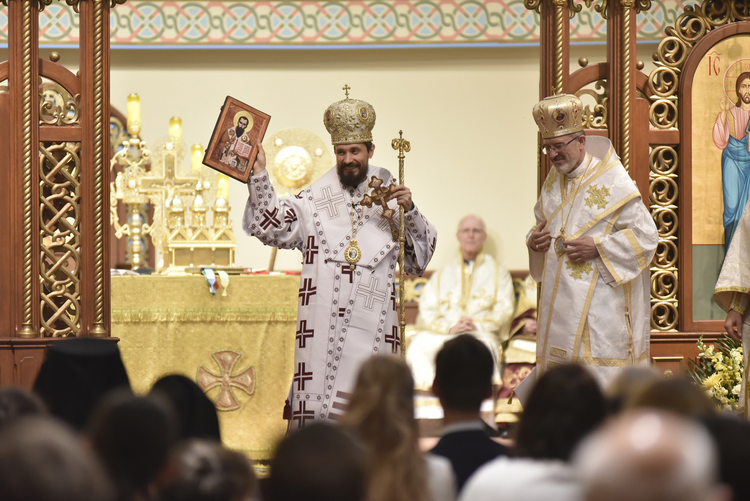 Bishop Milan Lach holds up an icon of Blessed Theodore Romzha, the Ruthenian bishop of Mukachevo, Ukraine, who was killed by the communists in the 20th century. (CNS photo/Reen Nemeth, Horizons)

Bishop Milan Lach, S.J., is the fifth Byzantine Catholic ordinary of the Ruthenian Eparchy of Parma, covering several Midwestern U.S. states. Enthroned as bishop on June 30 at his cathedral in Ohio, the 44-year-old Jesuit (an ethnic Ruthenian from Slovakia) is now the youngest Catholic bishop to head a territorial diocese in North America.

Born 1973 in then-Czechoslovakia, Bishop Lach was ordained a priest in 2001. Before Pope Francis sent him to the United States to replace retired Bishop John Kudrick, he served as an auxiliary bishop of Byzantine Catholics in Presov, Slovakia.

The Ruthenian Catholic Church, established in Pittsburgh by Rusyn (Ruthene) emigrants from Eastern Europe, is one of 23 Eastern churches in communion with the larger Roman Catholic Church. The Eparchy of Parma serves 8,000 Ruthenian Catholics. Because Ruthenians and other Eastern Catholics following the Byzantine Rite remain so scattered in the Midwest, some of Bishop Lach’s individual parishes cover the territory of entire Roman Catholic dioceses, but remain canonically independent of local Roman bishops under the Code of Canons of the Eastern Churches.

I recently interviewed Bishop Milan by email about his new job and Pope Francis.

What is the vision of Pope Francis that you hope to bring to the Byzantine Catholics of your eparchy?

The vision is to save their souls for the Heavenly Kingdom.

How do you see your role as a European bishop serving in the United States?

I need, as a bishop, to be a disciple of Jesus Christ. This is important in the United States and also in Slovakia.

As a Jesuit, you have worked with Catholics in both the Roman and Byzantine rites. What does this background teach you about being a bishop in a country where Roman Catholics far outnumber Byzantine Catholics?

It teaches me that we are brothers and we need to help each other and respect each other. Our goal is the same.

Every vocation to priesthood, celibate or married, has value. We need to appreciate it. We need to follow our vocation from God.

Because the vast majority of U.S. Catholics worship in the Roman Rite, many of them don’t know about the Byzantine Catholic churches in union with Rome. With your parishes and liturgies resembling Eastern Orthodox Christianity, some Roman Catholics do not know the “Catholic” on your sign means they can receive the sacraments from your priests. How do you explain the Byzantine Rite to outsiders?

We are Catholics with the common heritage of our Orthodox brothers but in unity with the Holy Father in Rome.

How much does Ignatian spirituality inform your approach to being a priest and bishop?

Very much, I still feel like a Jesuit. And I am grateful for what I received from the Society of Jesus. I would like to say to all Jesuits: Thank you, brothers.

When Pope Francis appointed you bishop of Parma at age 44, you became the youngest Catholic bishop in North America to head a diocese. As a young priest, where do you look for help in navigating this responsibility?

As each priest and bishop does, I myself will look for help in Jesus Christ, my Savior and my Lord. He is with me.

Every vocation to priesthood, celibate or married, has value. We need to appreciate it. We need to follow our vocation from God.

What does the priesthood mean to you?

What do you want people to take away from your work as bishop of Parma?

I want them to have a relationship with Jesus Christ. I am not important.

If you could say one thing to Pope Francis right now, what would it be?

I pray for you and for your service.

What is your favorite scripture verse?

No thanks you can keep bishop gender segregation pusher. The biggest reason not to be Orthodox . . They love their brothers while they oppress their sisters. I love it when Catholics tell me if we just allowed married male priests then they would push for women priests. Bull! Just look at these totally sexists guys . No thanks. Nothing to respect or admire here.

Here is a young Bishop who only wants to bring people to Jesus and you denounce him.

If anyone is going to change the Church in the direction you would like it to go it would be married Priests.
Demanding everything NOW ! Only hurts your cause.

Step by Step is how things get accomplished in this world.

Gender belongs in the lexicon of students and teachers of language and grammar. Almighty God endowed life on earth with a vast number of species consisting of two sexes, male and female.
His Son Jesus took on the lowliest station amongst humans, became incarnate as a single man.

After more than thirty years living in human community, he had many friends and they were both male and female.
In His infinite love and mercy He withheld the difficult, dangerous, dirty work of evangelising a hostile world by sparing women from a lot of the worst of it.

Take it up with Him. The successors of the apostles are not to blame, they did not invent the office and service of apostle, He did. He is strong enough and stable enough to face shrews, nags and fish-wives and deal with anything you have to throw at him with loving-kindness and masculine strength.

You do know who is Lord?

Thank you both for reading. Let's continue to pray for all of our bishops, priests, and lay faithful during these difficult times.

As far as I can tell there are no Ruthenian Churches near where I live.
I wish there were.
Fine example of a Bishop and a Jesuit
I only wish more Bishops and Jesuits had his faith and commitment to Jesus.

Sean, a little background would be helpful and interesting.

How can someone in an Orthodox communion become a Jesuit?
Who are the Byzantine Catholics in brief?
Do they have married priests?
Do they have female genital mutilation as do the Coptic communion?