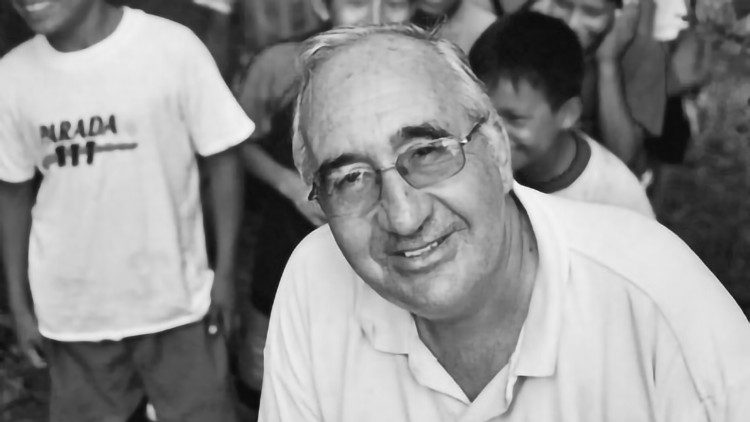 Carlos Riudavets Montes, S.J., who ministered among the indigenous in Perú’s Amazonian region, was found dead on Aug. 10 in the school where he had worked for many years, Vatican News Reports. He was 73.

His hands bound, the priest had suffered multiple stab wounds. His bloodstained body was found in the Valentín Salegui School kitchen in Yamakentsa, Perú, in the Bagua province, an area only accessible by waterway, according to El País. Father Riudavets has been serving in the country for 38 years.

“We reject any kind of violence in our country and we are just sad and worried, and we expect an investigation into what happened,” Victor Hugo Miranda, S.J., speaking on behalf of the Peruvian Jesuit Province, told Vatican News. “At the same time, we want to express how proud we are of the work and mission of Father Carlos.”

Father Riudavets was buried Aug. 12 in Chiriaco, in the Apostolic Vicariate of Jaen in Peru's northern Amazon region. Mourners carried his coffin through the streets of Chiriaco and jammed the small community's simple church for the funeral Mass.

A native of San Lucar de Guadiana in Spain's Huelva province, Father Riudavets had worked in Peru's Amazon region since 1980, serving as a teacher and later principal of the school. Although retired, he continued to live and assist there.

The school, in the community of Yamakai-entsa, serves about 270 Awajun and Wampis indigenous students from villages along five rivers in the region. No students were there at the time of the murder because the school was closed for mid-year vacation.

The priest "was a man who always had his feet on the ground," Bishop Alfredo Vizcarra Mori of Jaen told Catholic News Service. "Many people considered him like their father, because he had worked with so many generations.”

The area has been the site of illegal mining, oil spills and contaminated water supplies. Last week, the priest had been buying supplies for students who returned to school on Aug. 13, Father Miranda told El País.

Gumercinda Diure, the director of education of the Amazonia region, told RPP radio that Father Riudavets had been threatened by a student who was expelled from the school. Police said they are investigating the killing, Vatican News reports.

The Pan-Amazon Ecclesial Network, or REPAM, echoed the sentiments of the community, “which now cries in his absence.”

“We trust in the God of life and in the hope of the resurrection, in this moment we are united in solidarity with his Jesuit congregation, his companions in the mission, his family and we will remain vigilant so that the details surrounding his death will be clarified,” the network said in a statement.

This story has been updated with reporting from Catholic News Service.

Father Carlos Riudavets Montes, S.J. joins the long list of dedicated Jesuit missionaries in the Americas who have given their lives to serving the very poor in some of the most difficult mission areas. The Peruvian Amazonia, especially the area of Bagua, has been conflictual because of the incursion of mining and logging interests which threaten the indigenous populations. I know the work of the Jesuit sponsored Fe y Alegria schools which provide a quality education for children in the poorer sectors. The murder of Fr. Carlos highlights the dangers of all church people who understand and live the preferential option to serve the poor, and while this tragedy is indeed sorrowful, the work of the Jesuit missionaries needs to be applauded and celebrated as the good news to be shared in the catholic community.

I join in mourning the apparent murder of Father Montes. I admire him for his work among the poor as a (retired) teacher and principal. Although I certainly can't. be in any way associated with the holiness of this dedicated servant of God and the people, as a very imperfect Catholic I feel a certain kinship with Father Montes. In the past, I was a Special Education teacher who instructed children with brain damage. Father was described as a "father" because he was so close to generations of people. Although not a father, I felt like one to my students with disabilities. I hope that the crucial work to end environmental damage in this and other regions of the Amazon will continue unabated. Another memorable and holy follower of Jesus and the people, especially the poor and those threatened by violence is Blessed Oscar Romero of El Salvador. Archbishop Romero was assassinated while celebrating Mass in 1980. He will be canonized as a saint, likely in October. According to a newspaper published in El Salvador, Romero's intercession resulted in a miracle. In August, 2015, a 35 year old woman after she gave birth was diagnosed with a life-threatening condition that damages the liver and kidneys. Her husband prayed for Archbishop Romero's intercession, and although the new mother went into a coma for a time, by September she had made a full recovery.
Blessed Romero was known for his great faith in the face of the persecution of the Church, and the violence that took place during El Salvador's war. Archbishop Romero said, "I do not believe in death without the resurrection. If they kill me I will rise again in the people of El Salvador." May Father Montes rest in peace.