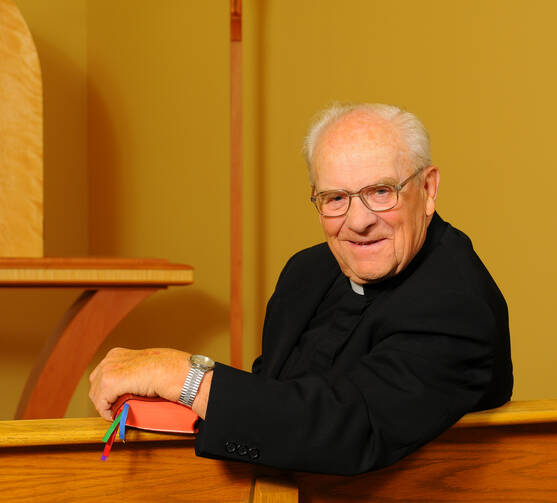 Archbishop Raymond G. Hunthausen may have been the epitome of the Vatican II bishop—pastoral, ecumenical, inclusive and relevant. He loved telling a good story.

One he retold often was about the potluck picnic that the parishioners of a small-town parish hosted for him in the city park across the street from the church. Hunthausen took a paper plate, served himself some fried chicken, baked beans and fruit salad and looked for a place to sit. All the tables were occupied. So he found himself a spot on the lawn next to a youngster who was wolfing down the meal.

The boy, who had no idea who Archbishop Hunthausen was, chatted away about his school, his friends and his new bike. When he paused to eat some more, the archbishop asked him: “Where’d you get that tin plate? Everybody else has a paper one.”

The boy motioned at a house across the street. “At home,” he replied. “I saw there was a picnic going on, so I got my tin plate and came on over.”

In sermons and retreats, Hunthausen told that story to illustrate God’s message: We are called to share with anyone who comes along. Bishop or boy.

Vatican II transformed him, introducing him to a universal church with a richness of liturgy, expression and ministry that he could not have imagined.

A quiet, reflective introvert content to listen from the back seats, Archbishop Hunthausen was an unlikely church leader. Born in 1921 the oldest of seven children in the smelter town of Anaconda, Mont., “Dutch” Hunthausen thought he would likely marry his high school sweetheart. But at Carroll College in Helena, he fell under the influence of Father Bernard Topel, an ascetic who became his life-long spiritual advisor. Father Topel suggested Dutch consider the priesthood. The young man agonized mightily but ultimately entered the priesthood.

Ordained in 1946, he was asked to teach at Carroll, then to be the school’s president and finally to be bishop of Helena. Each time he reluctantly accepted. He was soon the youngest and last U.S. bishop sent to the Second Vatican Council. He became the last living American bishop who participated in all four sessions of the council, which convened from 1962 to 1965.

The council transformed him, introducing him to a universal church with a richness of liturgy, expression and ministry that he could not have imagined. During an interfaith service at St. James Cathedral in Seattle marking his retirement in 1991, he said the council was “a watershed moment in my life.” At the council’s close, he said, he felt “born again” into the life of the church. He went home, embracing the council’s spirit of shared responsibility and mission to the world.

In 1975, Pope Paul VI asked him to be archbishop of Seattle. Again, he agonized, trying to discern not his but God’s will. He accepted and, within two weeks of taking office, set out in his Volkswagen Beetle to visit all 126 Catholic parishes in Western Washington. Everywhere he spoke enthusiastically about how Vatican II was reforming and revitalizing the church.

Archbishop Hunthausen soon discovered that his archdiocese was about to house the most lethal weapons system ever created—the Trident submarine, each with 192 nuclear warheads. As the Cold War between the United States and the U.S.S.R. heated up, millions of Americans feared that a nuclear doomsday was close.

Hunthausen’s peace activism infuriated the Reagan administration and the Vatican, which under Pope John Paul II was working closely with Washington to liberate Eastern Europe from Soviet domination.

Archbishop Hunthausen joined protests at the Trident base on Puget Sound. He withheld half of his federal income taxes. He began to advocate unilateral nuclear disarmament and became an international peace celebrity.

His peace activism infuriated the Reagan administration and the Vatican, which under Pope John Paul II was working closely with Washington to liberate Eastern Europe from Soviet domination. Rome also had other issues.

Archbishop Hunthausen was pushing the boundaries of canon law by naming women to head parishes. And he was speaking out for laws that protected gay people from discrimination. He allowed Dignity, a Catholic gay organization, to celebrate the closing Mass of its 1983 national convention at Seattle’s St. James Cathedral.

Cardinal Joseph Ratzinger, then head of the Congregation for the Doctrine of the Faith and the future Pope Benedict XVI, investigated, then punished Archbishop Hunthausen by giving the newly appointed Bishop Donald Wuerl (now cardinal archbishop of Washington, D.C.) final authority over key areas of archdiocesan policy. A public hue and cry resulted.

A healthy 70, the archbishop moved back home to Montana, declined all interviews and quietly filled in for vacationing priests. He was not completely free of the past, however. In 2003, at the height of the clergy sex abuse scandal in Boston, the Seattle archdiocese revealed that 47 priests who had served in Western Washington since the 1950s had credible accusations of child sexual abuse against them. Some of them had served on Archbishop Hunthausen’s watch.

The life of Raymond Hunthausen, the activist archbishop
John A. Coleman

Archbishop Hunthausen later was criticized by sexual abuse survivors who claimed he knew or should have known about abusive priests and members of religious orders during his tenure in Helena and Seattle. The Seattle Times reported that from 1987 to 2010, the Seattle archdiocese paid about $42 million to 300 abuse victims. The Helena diocese, facing more than 360 abuse claims, filed for bankruptcy in January 2014 and offered a $15 million payout to victims.

The archbishop conceded that he had been naïve about sexual abuse. Early on, he had been too slow to respond and too hopeful about treatment. By 1985, he got it. He had county prosecutors and the state attorney general’s office review all suspicious priest personnel files.

He created an outside, independent review panel of legal, psychological and sexual assault experts to evaluate abuse allegations against clergy. Proven pedophiles were removed from the priesthood. Jason Berry, the journalist credited with sounding the alarm on the church’s sexual abuse scandal, described Archbishop Hunthausen as the first church leader to deal with the problem publicly.

The last time I saw the archbishop he said he wondered why God had him live so long. I suggested that maybe God wanted him to experience Pope Francis, with his emphasis on compassion and justice rather than on law and doctrine.

The irony is that Archbishop Hunthausen, who was humiliated by the Vatican, did what Francis asks of church leaders today. He lived simply and humbly. He listened and served. And he extended Christ’s mercy and love to all, especially the poor, the suffering and the forgotten. 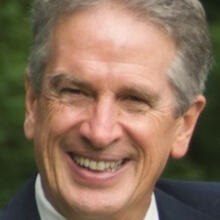 John A. McCoy is the author of A Still and Quiet Conscience: The Archbishop Who Challenged a Pope, a President, and a Church (Orbis Books).

John McCoy's book about the archbishop presents a most disturbing story of the church's decision to make an example of Archbishop Hunthausen in order to show other bishops that it was necessary to follow John Paul II's conservative religious and political agenda. Ratzinger and Wuerl come across as petty bureaucrats and fawning minions of the pontiff in their mistreatment of the archbishop. In the fullness of time, it is Raymond Hunthausen who will be remembered as the faithful champion of Vatican II, a dedicated priest, an extraordinary pastor, a worthy successor of the apostles.

I felt that Bishop Hunthausen, whom I used to watch basketball games with, was made
a bishop too young. He was not wary enough of those who sidled up to him seeking power.
Sadly, some of the Lay Parish Administrators, he appointed, were more clerical than any
priest I ever met. The Liturgy "experiments" were not always helpful.

Granted all that he was a very decent human.

God Bless You Bishop Ray Hunthausen...someday (soon) the Church will declare You a Sait...You’ve always been one to me.

I love this article, except for one line: "... maybe God wanted him to experience Pope Francis, with his emphasis on compassion and justice rather than on law and doctrine."

Why do we conceive of compassion as contrary to reason? What happened to "both/and"? Faith or works, god or man, compassion or reason... Why not both/and?

We will miss the spirit of Bishop Hunthausen, a priest who truly understood the command of Jesus. He didn't need to use venom or anger or nastiness. He used love wherever he went, and he led by example. After his retirement, he was an excellent celebrant and confessor in the Helena area. That's how I will remember him. Rest comfortably and in peace, good Bishop.

Humility? Baloney. He was continuously impressed with himself, with his willingness to thump his chest proclaiming his prophetic concerns and remain oblivious to the damage done by the orthodox leftism, especially to the poor, he so often extolled.
And the author should be careful about an unintended insult. The notion that “compassion and justice” is at odds with “law and doctrine” reflects a mindset devoid of any understanding of any of these four concepts. Moral law, so often made to seem like human caprice by anti-Catholic bigots, including anti-Catholic bigots within the Church, and Catholic doctrine are synonymous with authentic compassion and justice.

As someone who spent 8 years in the Archdiocese of Western Washington when “Fr. Dutch” (as he wanted to be known) was archbishop there I recognize this article as myth-making not history.

Instead of being the epitome of Vatican II, it was instead the summation of innovations in liturgy (the dancing girls who gave the archbishop’s homily at an ordination), in spirituality (a veritable parade of the who’s who of the new age in parishes, priest’s institutes, in the lay institute-founded to ensure diocesan “orthodoxy” among lay ministers), in moral theology in the open contempt for Church teaching, for just a few.

So, if his reign was the epitome of Vatican II, it was by enforcing his vision of it, rather than the Magisterium of the Council and the Popes, or by standing aloof and tolerating nonsense, rather than intervening as his duty required. As for the witch hunt of the visitation? He got off light, with 5 reprimands which he then deceitfully ignored. He was undone in the end, after trying to manipulate the USCCB into defending him, by his publicly lying about what the nuncio had stated about the duties of Bp. Wuerl.

So, little in this article will resonate with faithful Seattle Catholics of that era, many of whom endured ignominy after ignominy with few consolations, except what their faith provided, and almost none from official diocesan structures. Fortunately, however, for the Archbishop, neither Mr. McCoy’s puff or my, or others, criticism will be definitive for his future now. R.I.P.

All the way this can be easy to get the hack brawl stars here when we want the gems and gold here.