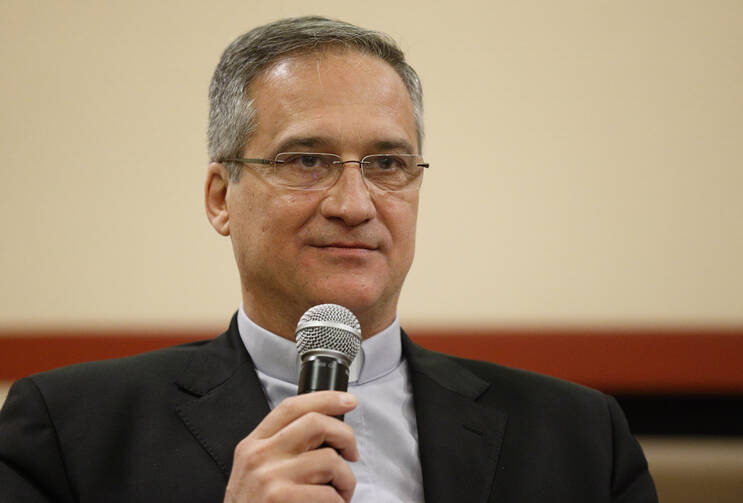 Msgr. Dario Vigano, then-prefect of the Vatican Secretariat for Communication, is pictured at a news conference at the Vatican in this Feb. 8 file photo. (CNS photo/Paul Haring)

Pope Francis has accepted the resignation of Msgr. Dario Vigano, prefect of the Secretariat for Communications, following a weeklong controversy in which the secretariat was accused of misrepresenting a letter sent by Emeritus Pope Benedict XVI to the Vatican monsignor.

The Vatican broke the news of the resignation today when it published two letters. The first was from Msgr. Vigano to the pope on March 19, which addressed the controversy and offered his resignation. The second was Francis’ reply dated today, March 21.

Pope Francis wrote: “following our last meetings and after reflecting at length and attentively weighing the motivations behind your request to ‘take a step back’ from the direct responsibility for the Dicastery for Communications, I respect your decision and accept, though not without some pain, your resignation.”

It was well known in the Vatican that Msgr. Vigano was close to the pope. In a sign of esteem for Msgr. Vigano, Francis took the highly unusual action of asking him to continue working in the secretariat and assigned him a new role within that structure. He appointed him as “assessor” in the secretariat “so as to be able to give your human and professional contribution to the new prefect and to the project of reform which the Council of Cardinals wanted, and which was approved and regularly shared by me.”

In other words, Pope Francis made clear that the reform that has been carried out so far under Msgr. Vigano, which he said is now in “its conclusive phase,” was fully supported by him all along. He noted that the final phase involves “the fusion” of the Vatican daily newspaper, L’Osservatore Romano, and the Vatican’s printing press into the secretariat.

Msgr. Vigano told the pope he was resigning “in order not to delay in some way, damage or even block” reform of the communications office.

Francis concluded the letter by thanking him “for the humility and profound sense of the church (sensus ecclesiae)” that he has shown in offering his resignation, imparting his blessing to him and entrusting him “to Mary.”

In his letter of resignation, Msgr. Vigano told Pope Francis that “many polemics” had surrounded his work in recent days, referring to the mishandling of Benedict’s letter, which he said “destabilized the complex and great work of reform" with which the pontiff had entrusted him in June 2015.

Msgr. Vigano told the pope that “in order not to delay in some way, damage or even block” this reform, he offered his resignation. He wrote, "I think that for me stepping aside would be a fruitful occasion for renewal."

The resignation is seen an as honorable step by Msgr. Vigano following his disastrous management of Benedict’s XVI’s letter, which has caused questioning of the pope’s reform of Vatican communications.

The Benedict Letter editing was bizarre. Why invite scandal, suspicion and detract from the intent of the letter by selectively blurring sentences? If the letter is going to be shared, then editing select sentences will obviously raise suspicions just like the politically craven do in the USA.

Thankfully he showed humility and quickly offered his resignation. Bravo. He was following the example of Pope Benedict XVI and Pope Francis. If only all Catholics did likewise.