A Jesuit reflects on the legacy of ‘America’ editor Francis Canavan, S.J. 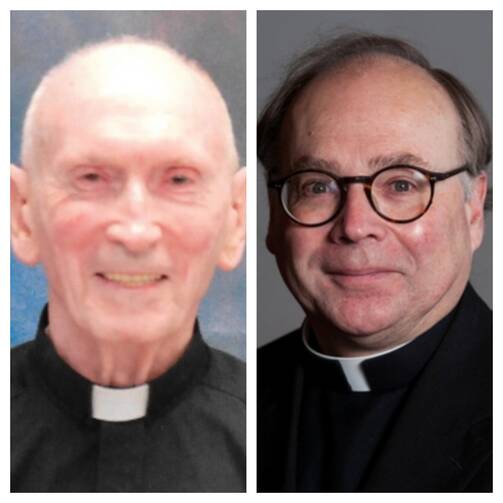 Stephen Fields, S.J., is a professor of theology at Georgetown University. His recent books include Analogies of Transcendence: An Essay on Nature, Grace, and Modernity (CUA Press, 2016). Father Fields recently wrote the introduction for Fun Is Not Enough: The Complete Catholic Eye Columns (En Route Media & Books), a compilation of Catholic newspaper essays by Francis Canavan, S.J., edited by theologian Dawn Eden Goldstein. The late Father Canavan was an America associate editor and longtime professor of political science at Fordham University who specialized in Edmund Burke.

How did you come to know Father Francis Canavan?

Father Canavan was teaching in the political science department at Fordham when I was a freshly minted Jesuit scholastic. In 1979, I was sent to New York to study philosophy as part of our extensive training. Those were especially distinguished days for Jesuit scholars at Fordham, as first rate minds were teaching in many of the university’s faculties, including classical and modern languages and the hard sciences. Canavan was already a senior professor there, and although I never was able to enroll in one of his courses, I saw him when the scholastics and priests would periodically gather for a celebration. I also heard him preach and give the occasional special lecture.

Raymond Schroth, S.J., recalled the “memorable personalities” of several Jesuits who worked under America editor Thurston N. Davis, S.J., in the 1950s. In what sense does Father Schroth’s description of Canavan as a “sharp-tongued conservative” resonate with your experiences?

Father Canavan always struck me as sharp-witted, not sharp-tongued. His voice was moderated, and I could readily perceive within this tough-minded academic the heart of a priest. I will admit that he carried himself with an intensity that did not easily encourage small talk. This, combined with his height and leanness, endowed him with a distinctive presence.

If you could add anything to this description of Father Canavan, what would it be?

It’s fair to call him a “conservative,” but it’s important to be clear about what this means. Aside from Catholicism, the greatest influence on Father Canavan was Edmund Burke, on whom he published three books. An 18th-century Anglo-Irish political theorist, Burke is rightly hailed as the father of modern conservatism. Against the bloody populism of the French revolution, and even in opposition to revered Americans like Jefferson and Thomas Paine, Burke believed in maintaining and nurturing the received traditions of culture. He believed that society should develop organically. Social inequalities should be addressed, of course, but the accumulated wisdom of the past should provide the guidelines for doing so.

To use Pope Benedict XVI’s term, Burke stood for the “hermeneutics of continuity” not of “rupture.” Father Canavan applied Burke’s theory to the problems of church and society during the upheavals surrounding Vatican II, civil rights and the Vietnamese War. Those who debated with him may have found him sharp-tongued when they felt the sting of his razor-sharp logic fortified by strong Burkean convictions.

Father Canavan applied Burke’s theory to the problems of church and society during the upheavals surrounding Vatican II, civil rights and the Vietnamese War.

In addition to Canavan and Davis, Father Schroth notes that America boasted a strong-minded staff of Jesuit academics and writers in the 1950s, including Vincent S. Kearney, Benjamin L. Masse, John LaFarge, Robert A. Graham and C.J. McNaspy. Would you say Thurston Davis presided over the “golden years” of our print magazine?

One should always be wary about calling anything in history “golden”! What we can say of those Jesuits is that they were well steeped in the humanistic, philosophical and theological tradition of Catholicism. For all its faults, that training did have a coherence that, when mastered over a decade or so, gave a solid reference point from which they could conduct what we today call “social analysis.” Davis, McNaspy, LaFarge and Canavan were especially creative in using their training to read “the signs of the times” from a distinctively Catholic perspective. They were first and foremost thinkers, not professional journalists. They avoided what Cardinal Newman in The Idea of a University saw as journalism’s dangers—“reckless originality” and “popularity of the moment.” If there was a golden age, that was probably the reason.

What surprises will current America readers find in Canavan’s essays?

One thought-provoking surprise will be Canavan’s commentary on contemporary feminism. In the spirit of Pope John Paul II’s encyclical “On the Dignity of Women,” he seeks to find what is natural to women as opposed to what is culturally conditioned. In “The Feminine Touch,” he wonders whether, if contemporary feminism had been alive at the time of Christ, would women, if they exercised positions of power traditionally reserved to men, have treated Jesus in his passion as brutally as the men did? Or would they have brought to those positions the same kindness and compassion that the Scriptures tell us they showed Christ in their powerless roles? In “Women’s Hearts,” he inclines toward the latter, and so assumes a middle position. While not encouraging women to renounce careers, he does worry women could be suborned into a “masculinism” that would undermine their civilizing effect on men. In such a case, men, women and society would all have their nature demeaned.

How does the title “Fun is Not Enough” capture the spirit of these essays for you?

The memorable title chosen by the astute editor is designed to provoke deeper thought about the nature of human happiness. It is not to be confined to fun, understood merely as light hearted pleasure. However good this can be, happiness in the fullest sense results when we realize the end, goal and purpose of ourselves as human persons. This purpose is nothing less than knowing, loving and serving God in this world in the hope of enjoying his presence in the next. Canavan’s essays act like a prism. Each one refracts a different color of the spectrum of happiness, helping us to see better how to know, love and serve God in the manifold challenges of modern human life.

Canavan’s essays act like a prism. Each one refracts a different color of the spectrum of happiness, helping us to see better how to know, love and serve God in the manifold challenges of modern human life.

In your introduction, you talk about Canavan’s battles with relativism. What was distinctive about his contribution to this discussion?

Canavan opposed relativism because he was committed to the ethics of the natural law. This began with the Greeks and Romans and was developed over the centuries by Aquinas and contemporary thinkers like John Finnis. The power of Canavan’s essays comes from his belief in an objective order of justice that human reason can discover. But to discover it, our minds must engage in dispassionate and sustained argument. Canavan thus offers a refreshing contrast to the moral narcissism that currently surrounds us. What is right, Canavan insists, is not based merely on our opinions, gut reactions and passing feelings. On the contrary, truth exists, and it demands that we conform our thoughts and actions to it.

What line or passage in the book has stayed with you most strongly?

I’ve been drawn to Father Canavan’s effort to keep the Christian image of God authentic against the pagan ideologies that ever try to corrupt it. In A God To Live For, he warns us against “‘the God who has no requirements, no prejudices, and no restrictions.’” This God is made in our own image and likeness, often stitched together from selected aspects of different religions that suit us. This God’s sole purpose is to meet our needs. Here Canavan dons the prophetic mantle. Like Dietrich Bonhoeffer, the German martyr who challenged Nazi ideology, Canavan diverts us from the “cheap grace” of religion without discipleship in Christ’s cross. Ironically, as he observes, this “therapeutic God” heals us of nothing. No one will really live for it, much less die for it.

As a fellow Jesuit academic, where do you see the Ignatian influence in Canavan’s essays?

The noted historian John W. O’Malley points out that a bold cultural mission lies in the heart of St. Ignatius’ vision for the Jesuits. It drew its inspiration from Christ whose incarnation sanctified everything human. To enrich and develop culture through education is thus a profoundly religious and spiritual undertaking. Father Canavan embodied this mission, as the erudition and eloquence of his essays testify. They emerged from his own deep engagement with culture, which Matthew Arnold, the 19th-century poet, defines as “the best that human beings have thought and said.”

What do you hope readers will take away from this book?

St. Paul tells us that in this world we see heavenly realities dimly as in a clouded lens (1 Cor 13.12). I hope that all who read the essays of this noble-souled Jesuit will have their vision of these realities made brighter and clearer.

Correction, July 3: The full name of the editor of the book of essays by Francis Canavan, S.J., is Dawn Eden Goldstein.