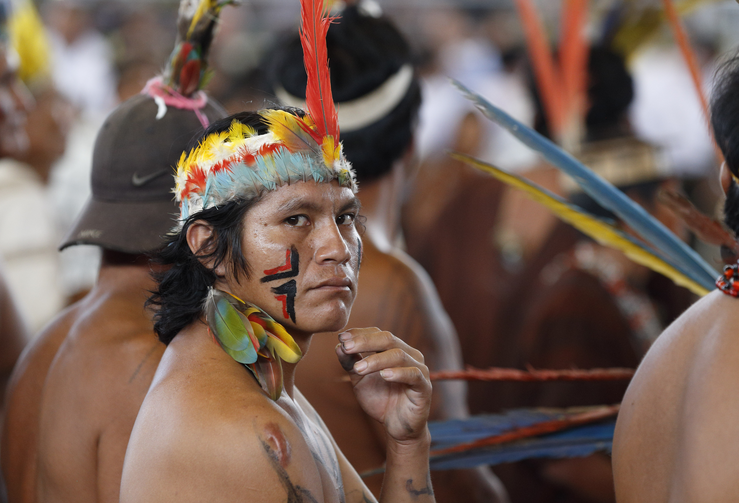 An indigenous community members attends Pope Francis' meeting with people of the Amazon in Puerto Maldonado, Peru, on Jan. 19. A Synod of Bishops on the Amazon region in 2019 will address pastoral needs of a region with few priests for the number of Catholics. (CNS photo/Paul Haring)

The preparatory document for the Special Assembly of the Synod of Bishops for the Pan-Amazonian Region, which will be held in October 2019, was presented at a press conference in the Vatican on June 8, convened by Cardinal Lorenzo Baldisseri, the secretary general of the synod of bishops.

“Amazonia: new paths for the church and for an integral ecology” is the title of the 15-page text. It aims to stimulate discussion before the synod and invites input from the local churches and the people of God, particularly in the nine countries of the Amazonian region. Once it receives this input, the synod secretariat will prepare the key working document for the assembly.

The cardinal emphasized that “the reflections” of this synod go far beyond the Amazon region, because “they relate to the whole church and the future of the planet” and seek “to serve as a bridge to other similar geographical realities such as, for example, the Congo basin, the biological corridor of Central America, the tropical forests of Asia in the Pacific, the Guarani water system.”

The preparatory document concludes with a list of 30 questions that the local churches and other interested groups are invited to respond to in a frank and bold way. Journalists sought particularly some comment on one of them: “What are the particularly Amazonian activities and ministries that you believe should be created and promoted?”

“The reflections” of this synod go far beyond the Amazon region, because “they relate to the whole church and the future of the planet.”

The cardinal was asked whether this question, together with a statement in the document that “our new paths will impact ministries, liturgy, and theology” (No. 15), signaled that the synod might open the path to the ordination of mature married men (“viri probati”) as many have been speculating?

Cardinal Baldisseri, an experienced diplomat, refused to be drawn into this controversial matter. Instead, he emphasized that the synod would reflect on many important topics and to reduce it to a single issue would be to misread the whole event and its purpose.

He explained that the preparatory document and the questions are aimed at stimulating discussion and inviting bold proposals from the local churches. The current synod text is working within the present tradition of the Latin church, but the local churches are free to make whatever proposals they deem fit in relation to ministries and liturgy.

Another question included in the preparatory document notes that “the role of women in our communities is of utmost importance” and asks: “how can we recognize and value them on our new paths?” The cardinal was asked whether that discussion envisages new roles for women, but he repeated that it is up to the local churches to make their proposals.

He told the assembled press that the preparatory document is divided into three parts, based on the “see, judge and act” method used for the synod on the family.

Part I on “Seeing: Identity and Cries of the Pan-Amazonia,” presents a picture of the territory, its socio-cultural diversity, the identity of its indigenous peoples, the church’s historical role, justice and rights for the peoples living there, their spirituality and wisdom.

Amazonia contains the world’s largest tropical forest and the region is “one of the major reserves of biodiversity.”

He said the text recalls that Amazonia contains the world’s largest tropical forest and the region is “one of the major reserves of biodiversity” (almost 50 percent of the worlds’ flora and fauna) and 20 percent of the “sweet water” of planet earth. Moreover, the region is home to 34 million people, over 3 million of whom are indigenous people from 390 ethnic groups

He highlighted the fact that “the riches of the forests and of the rivers are threatened by big economic interests in different parts of the territory, that provoke indiscriminate deforestation, contamination of rivers and lakes because of the use of toxic-agricultural materials, the spilling of oil, mineral extraction and the production of drugs. In addition, there is the human trafficking of women and children.”

Cardinal Baldisseri recalled that from the beginning of evangelization here in the 1600s, “the church was present in a strong and significant way, though not without shadows, in the defense and development of the native peoples right down to our day” through its “ecclesial and social action for the rescue of the oppressed and marginalized peoples.” He said the Latin American Bishops Conferences focused on this at Medellin (1968), Puebla (1979), Santo Domingo (1992) and Aparecida (2007).

Part II of the document deals with “Discernment: Towards a pastoral and ecological conversion.” The cardinal said this involves “discerning new paths, starting from our faith in Jesus Christ, illuminated by the Magisterium and Tradition of the Church.” It focuses on “the proclamation of the Gospel in Amazonia in its different dimensions: biblical-theological, social, ecological, sacramental and ecclesial-missionary.”

He recalled that Pope Francis said the mission of evangelization always has “a clear social content” and this means promoting throughout the world “a truly integral human development, that is for all persons and for the whole person.”

The text makes clear that “the task of evangelization invites us to strive against social inequalities and the lack of solidarity through the promotion of charity, justice, compassion, and care amongst ourselves and with animals, plants and all creation.” As the Aparecida document states, “the church is called to accompany and share the pain of the Amazonian people, and to collaborate in healing their wounds, putting into practice its identity as the Samaritan church.”

He said the document emphasizes that “the process of the evangelization of the church in the Amazon cannot prescind from the promotion and care of nature and of its peoples” and shows how the celebration of baptism and the eucharist, the “missionary dimension” of the church, and the popular religiosity of the region’s peoples are all involved in this process.

Part III focuses on “Action: New Paths for a Church with an Amazonian Face.” The cardinal said this means a deeper inculturation of the Gospel, and lines of action best suited to the integral ecology that Pope Francis outlined in “Laudato Si’,” ones that are able to respond to the situations of injustice in the region. The Aparecida document has given a whole new energy and vision to this evangelizing work in Amazonia, he added.

The preparatory document (No. 14) states that these new paths for pastoral case in the Amazonia call for “re-launching the work of the church” in the territory and for delving deeper into the “process of inculturation,” which requires the church in the Amazon region to make “courageous” proposals, that is, the “daring” and “fearless” attitudes that Pope Francis calls for.

It said the church’s prophetic mission is today carried out through its “inclusive ministerial action, which allows indigenous peoples and Amazonian communities to be its “principal interlocutors” regarding all the territories pastoral and socio-environmental matters.”

Referring to these new paths (No. 15), it says that “in the process of thinking of a Church with an Amazonian face, we dream with our feet grounded in our origins, and with our eyes we consider the future shape of this church, starting from its peoples’ experience of cultural diversity. Our new paths will impact ministries, liturgy, and theology.”

The secretariat expects to receive responses from the local churches by February 2019, and plans to publish the working document the following June.

If the indigenous Amazonian peoples had defensible property rights, we wouldn't be worrying about this issue. The feudal model preferred by the Southern European Catholic Church ensures their economic poverty into perpetuity.

The popes have expressed special concern for the Amazon people for centuries. Two encyclicals, one in the 18th century and one in the 20th, focused on the plight of exploited workers, such as rubber gatherers. The emphasis on protecting the delicate ecology of the Amazon Basin, literally the lungs of the globe, adds another voice to this essential task. Today the Basin is assaulted by illegal logging, illegal trade in animals, and the violence and corruption generated by drug trafficking.

A big issue these days in the Amazon is the killing of children by indigenous people. Anthropologist defend their right to kill their children as Brazil tried to outlaw it.