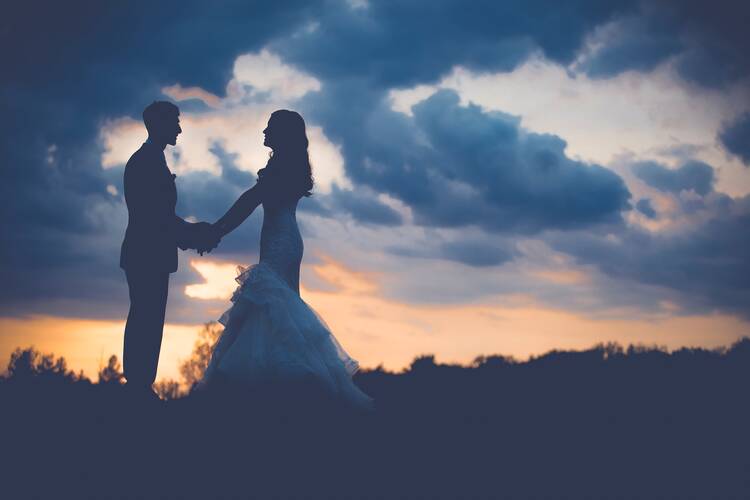 Photo by Anne Edgar on Unsplash

According to The Baltimore Sun, Charm City’s most beautiful wedding venues include the National Aquarium, where you can snap photos in front of a dolphin tank, the George Peabody Library, which costs a cool $7,500 to rent, no catering included, and The Cloisters, a castle-like venue that has been featured on “Homicide: Life on the Streets” and “The Wire.”

Couples in Baltimore who wanted to get married at any of those locations—or in a field, or on a beach—in a ceremony that included a Catholic priest or deacon would have been out of luck. Until now.

The Archdiocese of Baltimore recently launched (this past Valentine’s Day, as it happens) a 12-month trial period during which couples can seek permission to hold Catholic weddings outside churches and chapels. The new policy states that the preferred location for weddings is still the home parish of the bride or groom, but it allows for holding weddings at other locations, including outdoors. Couples must approach a priest at least six months before their desired wedding date, and the priest must then seek special approval from the archdiocese.

Decisions are made on a case-by-case basis, and some locations are still off limits, including casinos, bars and nightclubs.

Dianne Barr, the archdiocese’s chancellor, told America that the policy went into effect in February and that about 50 applications have been approved. “So far, the requests for a particular request have been well thought out,” she said, adding that some couples who had already planned ceremonies outside a church with an officiant who is not a Catholic priest or deacon have learned about the new policy and sought to include a Catholic minister.

Decisions are made on a case-by-case basis, Ms. Barr said, and some locations are still off limits, including casinos, bars and nightclubs. Though Baltimore is located on the water, boats are also off limits because of the possibility that during the ceremony, the boat could float into jurisdiction not covered by the archdiocese or the appropriate civil authorities. For outdoor ceremonies, locations must have an indoor facility available in the event of inclement weather, and the standard norms for a Catholic ceremony must be followed, including the use of sacred music.

Nationally, the number of Catholic, sacramental weddings has plummeted since 1964, when more than 350,000 were celebrated, according to the Center for Applied Research in the Apostolate. In 2016, the number had fallen to 144,148.

She said she hopes the ceremonies may serve as “an invitation” to couples to continue participating in the church’s sacramental life.

The Archdiocese of Baltimore is not the first Catholic diocese in the United States to allow weddings outside of churches—the Diocese of Helena, Mont., began allowing outdoor weddings in 2015—but it is still very rare. (Canon law stipulates that Catholic weddings should take place in the couple’s home parish but states that with permission of the bishop or priest “marriages can be celebrated elsewhere.”)

The change in Baltimore was instituted after priests in the archdiocese asked Archbishop William E. Lori for permission to celebrate weddings in non-Catholic spaces, citing mounting requests from parishioners. Couples who seek permission for these kinds of ceremonies are still required to complete pre-marriage counseling, and while most ceremonies will likely not include a Mass, Ms. Barr said that if a couple requested one, the priest could seek permission from the archdiocese.

Ms. Barr said that at the end of the trial period, the archdiocese will collect data to learn who is requesting permission for these kinds of ceremonies and whether priests have found them helpful.

“We’re looking to learn first of all, who’s asking for it? Is one Catholic and the other unbaptized? A Catholic and a non-Catholic?” Ms. Barr said, adding that so far, most of the applications have included couples like this. “Where are they located? What are their ages?” She said she hopes the ceremonies may serve as “an invitation” to couples to continue participating in the church’s sacramental life.

Allyson Escobar, an intern at America, contributed to this report.

Wow - it's about time. It is unfortunate that the church in New York is not as forward thinking. In my view the Catholic Church is out of step with many people - millennials in particular. Priests are clinging to out of date, unresponsive man made rules that don't speak to Catholics today. These are not doctrinal, theological issues. Poor attendance at Sunday Mass should a clue to priests that the Catholic Church is not in tune with the people. It's time for these men to wake up and reconnect with the people. What happened to the "aggiornamento" spirit of Vatican II? By the way - open your eyes and give women a greater role in the Church - Jesus did.

Completely agree. Reading Natural Law Theory arguments by cardinals so frequently takes me back to Medieval times when Thomistic ideas were ideas, not treated as the laws of God. The same is true of some traditions. In those times as in these, the Church attempted to control every aspect of human life.

It's about time!! If the pews are empty, and they are, priests need to look to themselves for the reasons.

As for renting a nice place for $ 7,500...
keep your marriage simple and give the money to the Poor.

I think this is an excellent idea, especially in places of natural beauty like parks, lakes, and beaches, as long as the location is dignified. Just attended a protestant wedding over the weekend at sunset on a beach, and it was lovely and reverential. Have also attended a Mass in a priest's room at a ski resort full of windows showing the mountain vistas. It was all dignified and respectable.

The main problem with this as a controversy is that many people are interested in the wedding as an "event" and not as a sacrament. It's infinitely more important to love Christ, and understand that any "rules" are not just arbitrary, but are there for the purpose of helping the couple. When we become so superficial that we are more concerned about the style, the "venue", the pictures, the dress, and all other superficial, material concerns, that crowds out the all-important REAL reason for the wedding!

A wedding is only one day; but a marriage is a lifetime and needs the graces of God administered by His Church and dispensed through His Sacraments.

Every engaged couple would be better off if they attached more importance to preparing themselves spiritually for a lifelong marriage than obsessing about an exotic or novel venue for the one day ceremony.

A couple who is more focused on the one day and having a scenic or novel venue----that they think is better than the inside of a Catholic Church--- display a sad lack of understanding of the sacred, sacramental nature of marriage and the graces they will need when the one wedding day is over.

Being able to marry inside a Catholic Church is a privilege and a blessing from Jesus and the Church He founded. It is sad that some couples don’t appreciate this gift, and it is their loss!