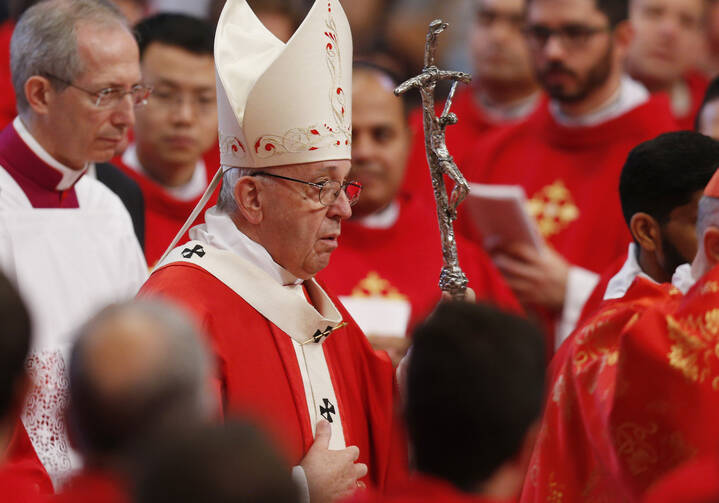 Pope Francis arrives in procession to celebrate Mass marking the feast of Pentecost in St. Peter's Basilica at the Vatican May 20. The pope at his "Regina Coeli" announced that he will create 14 new cardinals June 29. (CNS photo/Paul Haring)

Pope Francis announced today, the feast of Pentecost, that he will create 14 new cardinals on June 29, eleven of whom are under the age of 80 and so have the right to vote in the next conclave. Three are over the age of 80: an archbishop, a bishop and a priest.

It will be the fifth consistory of Francis’ pontificate, and for the first time he exceeds the ceiling of 120 electors first established by Paul VI. (St. John Paul II also exceeded that ceiling.)

Eleven of the new cardinals are under the age of 80 and so have the right to vote in the next conclave.

Eleven of the 14 are electors, that is cardinals under the age of 80 with the right to vote in a conclave. This brings the number of electors to 126. Six of the eleven are European, three of whom are Italian. The others come from Iraq, Pakistan, Japan, Peru and Madagascar. With these appointments, Francis has created 59 of the 126 electors in the college of cardinals.

The eleven electors are:

His Beatitude, Louis Raphaël I Sako (Iraq), patriarch of Babylon of the Chaldeans;

Luis Ladaria (Spain), prefect of the Congregation for the Doctrine of the Faith;

Giovanni Angelo Becciu (Italy), substitute for the general affairs of the church in the Secretariat of State, and special delegate to the Sovereign Military Order of Malta;

The three that are over the age of 80 and cannot vote in a conclave, include an archbishop, a bishop and a priest from the Claretian order:

Aquilino Bocos Merino (Spain), a priest of the Claretian order.

Correction, May 20: The number of electors in the college of cardinals with these appointments is 126, not 128.

ANOTHER list of new Cardinals that doesn't include Archbishop Jose Gomez of LosAngeles !

Could it be because he's OPUS DOPUS ?!