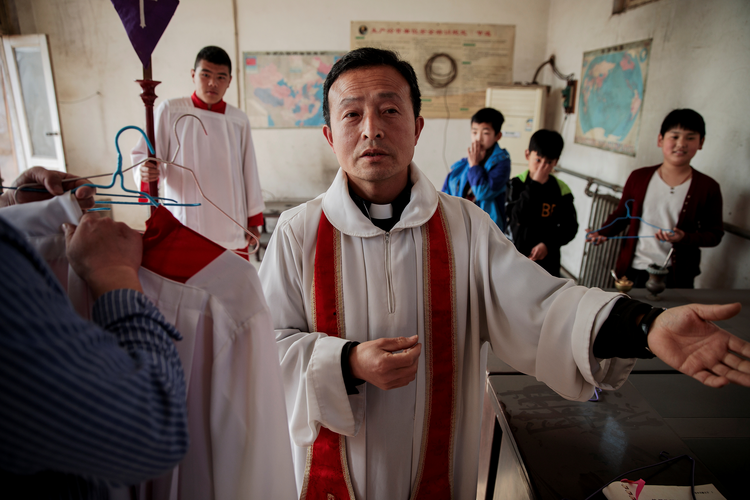 HONG KONG (CNS) -- Catholics in China's Henan province have been warned that venues will be closed if they do not adhere to the revised regulations on religious affairs.

Ucanews.com reported that a clampdown on religious freedom has intensified in the province in recent months, with crosses removed from churches, minors banned from entering churches, church-run kindergartens closed and children expelled from Mass.

It warned people to follow "the principle of religion and education separation" and the revised regulations on religious affairs. It said no religious venue should hold training sessions and no children should be brought to church by parents.

"It was only propaganda and education previously, but now there is a red line, a high-pressure line, so take it seriously," the circular said.

It warned that if anyone did not follow the rules, authorities would pursue the person responsible and close the venue.

A Catholic who asked to be unnamed told ucanews.com that officials of the Religious Affairs Bureau of Huiji district went to North Church of Zhengzhou Diocese April 1 and ordered all minors to leave the Easter Mass. He said local officials had previously blocked minors at church entrances in Henan's Shangqiu and Anyang dioceses.

"We do not know what will happen next," he said.

Two primary schools in Henan have written an open letter to all students and parents warning them minors were not allowed to enter religious venues, according to Article 36 of the constitution, the Education Act, Minors Protection Law and the revised regulations on religious affairs.

Ucanews.com reported that a clampdown on religious freedom has intensified in the province in recent months, with crosses removed from churches, minors banned from entering churches, church-run kindergartens closed and children expelled from Mass.

It stated that China had adopted the principle of separating education and religion, so religions must not intervene in national and public education.

"It is an offense for any organizations or individuals to guide, support, permit and condone minors to believe in religions or participate in religious activities," the letter said.

The letter said minors were at a critical stage of physical and mental development and had no independent thinking, so parents had an obligation to nurture children in accordance with national laws and social requirements.

Parents were asked to sign the letter and write down their children's names and classes.

Another circular widespread on the internet states that citizens have religious freedom but schools are places for education. "For the state to foster students to build up socialist society," no organization is allowed to use propaganda and engage in any religious activities, it said.

It emphasized that citizens should engage in religious activities approved by the government outside schools, but students could not take their schoolmates and friends to participate in such activities.

Class teachers were asked to explain items on the circular, and students were told to write down their names, teachers' names and the place and time when they heard the explanation.

One priest told ucanews.com that the measures on minors and crosses in Henan were pilot projects conducted by national institutions.

"If those measures are successful in Henan, they could be implemented in other provinces," he said.