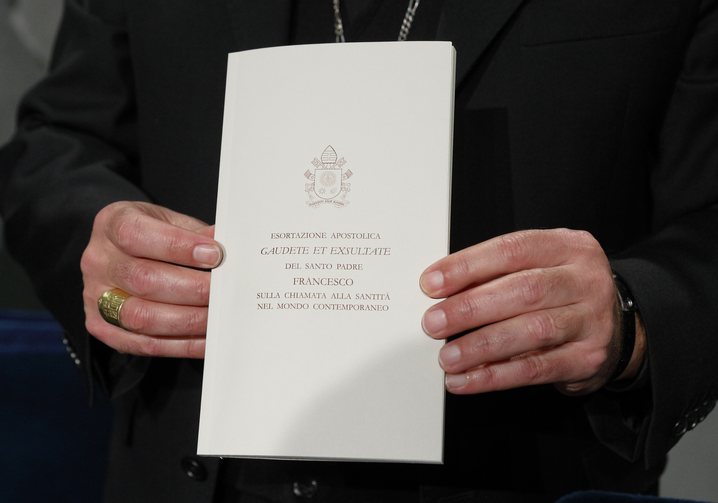 Archbishop Angelo De Donatis, papal vicar for the Diocese of Rome, holds a copy of Pope Francis' exhortation, "Gaudete et Exsultate" ("Rejoice and Be Glad"), during a news conference on the exhortation at the Vatican April 9. (CNS photo/Paul Haring)

Pope Francis’ new apostolic exhortation, “Gaudete et Exsultate,” (“Rejoice and Be Glad”) offers Christians a rich reflection on the “Call to Holiness in Today’s World.” It is both steeped in the church’s spiritual tradition and at the same time is a passionately personal document.

The third of the pope’s apostolic exhortations, it bears the date March 19, 2018. Thus it marks the fifth anniversary of Francis’ inaugural Mass on the Feast of St. Joseph, March 19, 2013, and, in many ways, can be read as a recapitulation of major themes and concerns of his papal magisterium.

Examining “Gaudete et Exsultate” from the viewpoint of St. Ignatius’ meditation on the two standards

Though other of the pope’s writings and homilies manifest the imprint of his Ignatian spiritual tradition, perhaps none does so in such a striking manner.

There is much to ponder in the document, and it will repay multiple readings. But an initial approach might helpfully consider it from the viewpoint of St. Ignatius’ great meditation on the two standards in his Spiritual Exercises. From this vantage a suggestive starting point is to begin with the fifth and last of its five chapters: “Spiritual Combat, Vigilance, Discernment.” For this is the concrete situation in which we all find ourselves.

Francis does not mince words. “The Christian life is a constant battle,” the pope writes. “We need strength and courage to withstand the temptations of the devil and to proclaim the Gospel. This battle is sweet, for it allows us to rejoice each time the Lord triumphs in our lives” (No. 158).

Pope Francis insists that the ‘evil one’ is no myth left over from a less enlightened age.

He goes on to insist that the tradition’s reference to the evil one is no myth left over from a less enlightened age. It is our loss of the sense of the supernatural that camouflages the real nature of the battle pressing upon us. So the pope continues: “in leaving us the Our Father, Jesus wanted us to conclude by asking the Father to ‘deliver us from evil.’ That final word does not refer to evil in the abstract; a more exact translation would be ‘the evil one.’ It indicates a personal being who assails us. Jesus taught us to ask daily for deliverance from him, lest his power prevail over us” (No. 160).

The choice before us, then, is under which banner are we to enlist in the spiritual combat that perforce we face? The stakes, of course, are not less than everything. Christians, by their baptismal vocation, are already enlisted in the company of Christ. The goal of “Gaudete et Exsultate” is to provide encouragement and direction in the arduous, yet joyful journey of growth toward spiritual maturity in the Lord, growth in holiness.

In a wonderful paragraph at the beginning of the document, Francis makes abundantly clear the Christic nature of holiness. “At its core, holiness is experiencing, in union with Christ, the mysteries of his life. It consists in uniting ourselves to the Lord’s death and resurrection in a unique and personal way, constantly dying and rising anew with him.... The contemplation of these mysteries, as Saint Ignatius of Loyola pointed out, leads us to incarnate them in our choices and attitudes” (No. 20). 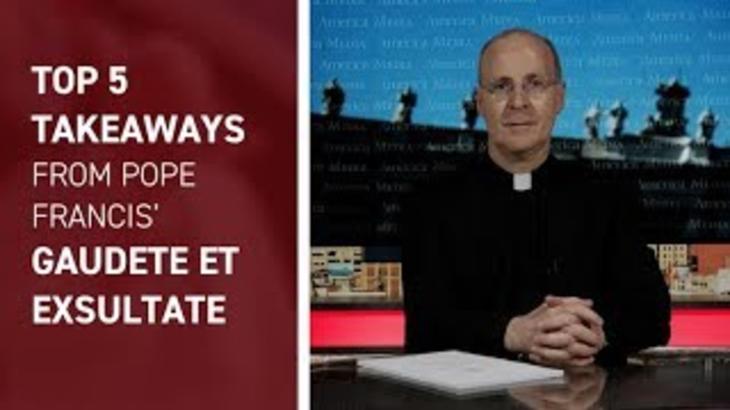 Thus, enlisting under the banner of Christ entails both contemplating the mysteries of Christ and embodying them in all our attitudes and actions. Francis suggestively cites here his predecessor, Benedict XVI: “The measure of our holiness stems from the stature that Christ achieves in us, to the extent that, by the power of the Holy Spirit, we model our whole life on his” (No. 21).

Christians ineluctably confront two standards, two ways: the way of Christ, whose apparent darkness is a prelude to eternal light, and the way of the enemy, whose false light leads only to darkness and despair. And our choice is made not once for all but requires daily renewal and recommitment. Hence, according to the pope, the urgent need for discernment.

We know how dear to Francis is this theme of discernment. And how indispensable it is for the spiritual life. But I think his development of the subject in the last chapter of the exhortation is particularly nuanced and helpful.

He immediately cuts to the chase: “How can we know if something comes from the Holy Spirit or if it stems from the spirit of the world or the spirit of the devil?” (No. 166). Discernment then is not primarily about the decision to be made. It involves the more difficult and laborious process of discerning what spirit is moving us. Thus discernment requires much more than native intelligence or mere common sense. True discernment is a grace, “a gift which we must implore” (No. 166).

Pope Francis wants you to be holy online. Here’s how.
Michael J. O’Loughlin

For we are all prone to self-deception. No one is immune. Thus the pope urges: “I ask all Christians not to omit, in dialogue with the Lord, a sincere daily examination of conscience” (No. 169).

Throughout “Gaudete et Exsultate,” Francis, like a good spiritual director, clarifies both the prize to which Christians are called and the particular pitfalls they face in today’s individualist and consumerist culture. Even “discernment” can be co-opted by an all-devouring culture, a “culture of zapping” in the pope’s telling phrase. Thus his pointed reminder:

[Discernment] involves more than my temporal well-being, my satisfaction at having accomplished something useful, or even my desire for peace of mind. It has to do with the meaning of my life before the Father who knows and loves me; it has to do with the real purpose of my life, that nobody knows better than he. Ultimately, discernment leads to the wellspring of undying life: to know the Father, the only true God, and the one whom he has sent, Jesus Christ (cf. Jn 17:3) (No. 170).

We rejoice and exult because we have been given to drink from that fount of life, and we yearn to drink yet more fully, to advance on the way of Christ, the Holy One who calls us to holiness.

"In effect, doctrine, or better, our understanding and expression of it, “is not a closed system, devoid of the dynamic capacity to pose questions, doubts, inquiries… The questions of our people, their suffering, their struggles, their dreams, their trials and their worries, all possess an interpretational value that we cannot ignore if we want to take the principle of the incarnation seriously. Their wondering helps us to wonder, their questions question us.” (44)

Faith is believing, even when we might not always fully understand; only The Truth of Love can set us free, and lead us to Salvation.

The purpose of Religious Liberty, which can only be endowed to us from The True God, is so that we can come to know, Love, and serve The Most Holy And Undivided Blessed Trinity in this life, and hopefully, be with The True God and our beloved, forever in Heaven.

We can know, through both Faith and reason, a Catholic Bishop, Cardinal, or Pope, "who calls on a Catholic University to be true to its Catholic character" is, as Richard Garnett, Professor of Law at The University of Notre Dame, has stated, "exercising, not undermining, religious liberty".

While it is true that "nothing genuinely human fails to raise an echo in Christian's hearts", we do have something to fear from endless "inquiry, investigation, argument, and testing", in regards to The Deposit of Faith, - the loss of Faith due to those who doubt, and desire to debate God's Truth, rather than repent and believe in The Way, The Truth, The Light (Life) of Love, our Savior, Jesus The Christ. The Deposit of Faith, Entrusted to Christ's One, Holy, Catholic, and Apostolic Church, is that which a Catholic must believe with Divine and Catholic Faith ( Catholic Canon 750).

It Is Through Him, In Him, and With Him, In The Unity Of The Holy Ghost (Filioque), that Holy Mother Church exists. A "Gnostic", like a "Pelagian", denies The Unity of The Holy Ghost and by denying The Divinity of The Most Holy and Undivided Blessed Trinity, denies the fact that There Is only One Word of God, One Truth of Love Made Flesh, One Lamb of God Who Taketh Away The Sins of The World, Our Savior, Jesus The Christ, and thus denies Salvational Love, God's Gift of Grace and Mercy.

" [20] And I live, now not I; but Christ liveth in me. And that I live now in the flesh: I live in the faith of the Son of God, who loved me, and delivered himself for me." - Galatians, Chapter 2

that is soo interesting.
lasvegaspools.org/monthly-pool-service.html

Rigidity too is a form of defense in spiritual warfare.

Please, Holy Father, know that we, your abused children, have adopted rigidity for our very survival. That we are rigid not out of gnostic and pelagian selfishness, but out of actual harm done to our families and ourselves by the embrace of sexual revolutionary ideas by the clergy and the consecrated. We are rigid because we have to be- to protect our sons and our daughters from pornographers and sex traffickers that are not only common in society, but have even infested the clergy of the church. We have a need to protect intact marriages from the abuse of divorce.

We are the wounded. Why has the church abandoned us?

If the Pope has abusive priests burned at the stake, will you stop being rigid?
What about Jesus, His Father let Him be crucified in agony unto death?

You are excusing yourself for adopting a stance, choosing a reaction, which is essentially not Christlike if you insist that your reaction must be simply excused and accepted.
All of us have been sinned against, and all of us have sinned. We are morally responsible for cooperating with the grace of God in moving towards healing and forgiveness, and no-one claims it is easy.
Staying rigid, bitter, resentful, vengeful and the like is understandable and inexcusable.
In fact, it is letting the abuser harm your soul continually after having harmed your mind and body.
Do not consent to allowing your abuser to rule the rest of your life into eternity.

How about the part where he gives cover to pro-choice Catholics, eg Democratic politicians, when he declares abortion is just one more social justice issue? That theme has already spread like wildfire. Also, where he again insults traditional Catholics. This document means nothing to me.

I would also like to know this... there is some sense of protectionism on certain religious sections. Timmy floor and decor.

It is a beautiful article. The article is titled as “Pope Francis’ new exhortation on holiness is deeply Ignatian”. Pope Francis is well known for his simple life and also for his great values. Pope Francis’ most recent apostolic exhortation, “Gaudete et Exsultate,” which means “Rejoice and Be Glad” presents Christians a prosperous view on the “Call to Holiness in Today’s World.” Pope’s apostolic exhortation sheds lights on the church’s spiritual tradition and also stands as a passionately personal document.

This is rarely placed on the tabloids but for now i got it. carpetcleaningnv.com