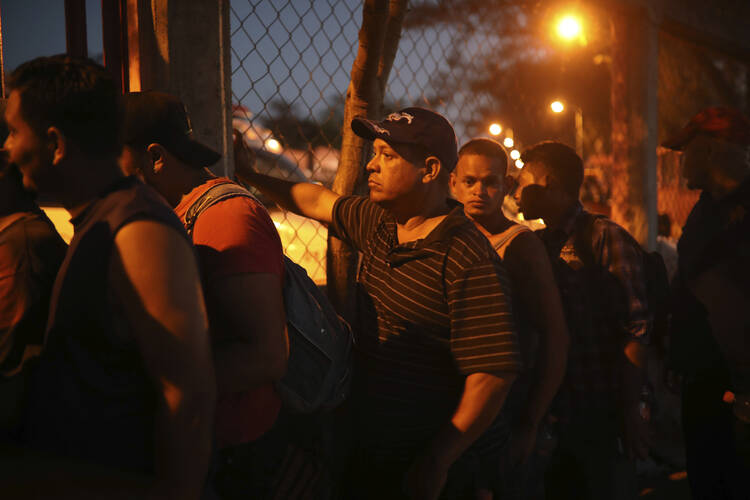 Central American migrants stand in line for food during the annual Migrant Stations of the Cross caravan or "Via crucis," organized by the "Pueblo Sin Fronteras" activist group, as the caravan makes a few-days stop at a sports center in Matias Romero, Oaxaca state, Mexico, late Monday, April 2, 2018. The annual caravans have been held in southern Mexico for years as an Easter-season protest against the kidnappings, extortion, beatings and killings suffered by many Central American migrants as they cross Mexico. (AP Photo/Felix Marquez)

MATIAS ROMERO, Mexico (AP) — The caravan of Central American migrants that angered U.S. President Donald Trump was sidelined at a sports field in southern Mexico with no means of reaching the border even as Trump tweeted another threat to Mexico Tuesday.

"The big Caravan of People from Honduras, now coming across Mexico and heading to our "Weak Laws" Border, had better be stopped before it gets there," Trump wrote. "Cash cow NAFTA is in play, as is foreign aid to Honduras and the countries that allow this to happen."

The caravan that once numbered 1,150 or more people actually halted days ago in the town of Matias Romero in the southern state of Oaxaca.

On Tuesday, the group — mostly Hondurans — that had been walking along roadsides and train tracks prepared meager breakfasts with donated food.

They were getting advice from Mexican immigration officials on filing for temporary transit or humanitarian visas in Mexico.

A couple hundred men did break off from the march Sunday, hopping a freight train north, probably with hopes of trying to enter the U.S. But the rest seemed unlikely to move again until Wednesday or Thursday, and they probably would take buses to the last scheduled stop for the caravan, a migrant rights symposium in the central state of Puebla.

Irineo Mujica, director of Pueblo Sin Fronteras, the activist group behind the annual symbolic event designed to draw attention to the plight of migrants, said the caravan would continue only to Puebla southeast of Mexico City, "but not in a massive way."

After the symposium, some migrants might go to Mexico's capital, where it is easier to make an asylum claim. Mujica said about 300 to 400 say they have relatives living in Mexico and so may consider staying here at least temporarily.

There were reports Mexican officials were seeking to end the caravan, but it was for all intents and purposes over anyway. The participants were never equipped to march en masse to the U.S. border or anywhere near it.

The "Stations of the Cross" caravans have been held annually in southern Mexico for about 10 years. They began as short processions of migrants, some dressed in biblical garb and carrying crosses, as an Easter-season protest against the kidnappings, extortion, beatings and killings suffered by many Central American migrants as they cross Mexico.

The Editors: Trump is asking the nation to make an impossible choice on immigration
The Editors

The organized portions of the caravans usually have not gone much farther north than the Gulf coast state of Veracruz, although some participants have then gone off by bus or truck to the U.S. border, moving as individuals or in small groups.

This year's event seems to have gotten more notice in the U.S., and Trump has sent some angry tweets that raised hackles in Mexico, which in recent years has detained and deported hundreds of thousands of Central American migrants before they could reach the U.S. border.

There were reports Mexican officials were seeking to end the caravan, but it was for all intents and purposes over anyway. The participants were never equipped to march en masse to the U.S. border or anywhere near it.

"Mexico is doing very little, if not NOTHING, at stopping people from flowing into Mexico through their Southern Border, and then into the U.S. They laugh at our dumb immigration laws. They must stop the big drug and people flows, or I will stop their cash cow, NAFTA. NEED WALL!" Trump wrote in one. "With all of the money they make from the U.S., hopefully they will stop people from coming through their country and into ours."

"We will act with complete sovereignty in enforcing our laws," he said Monday. "Of course we will act ... to enforce our immigration laws, with no pressure whatsoever from any country whatsoever."

In a statement late Monday, Mexico's government said about 400 participants in the caravan had already been sent back to their home countries. "Under no circumstances does the Mexican government promote irregular migration," the Interior Ministry statement said.

But it added that Mexico considers the annual caravans to be "a public demonstration that seeks to call attention to the migration phenomenon and the importance of respecting the rights of Central Americans." The U.S. government has been kept fully informed of the situation, it said.

The department also said that unlike in previous yearly caravans, "this time Mexican immigration authorities have offered refugee status" to participants who qualify. But it suggested it is not up to Mexico to keep people from going to the U.S. to apply for asylum.

"It is not this government's responsibility to make immigration decisions for the United States or any other country, so it will be up to the appropriate authorities of the United States to decide whether to authorize the entry of the caravan participants to U.S. territory," the statement said.

Navarrete Prida had said earlier that he talked with U.S. Homeland Security Secretary Kirstjen Nielsen on Monday about handling migration, "in accordance with each country's laws."

Nielsen later tweeted that their talk focused specifically on the annual migrant caravan. "Working with Mexican officials to address the yearly illegal alien caravan. Exploring all options," she wrote.

Mexico considers the annual caravans to be "a public demonstration that seeks to call attention to the migration phenomenon and the importance of respecting the rights of Central Americans."

Mexico routinely stops and deports Central Americans, sometimes in numbers that rival those of the United States. Deportations of foreigners dropped from 176,726 in 2015 to 76,433 in 2017, in part because fewer were believed to have come to Mexico, and more were requesting asylum in Mexico.

Mexico granted 3,223 asylum requests made in 2016, and 9,626 requests filed last year are either under review or have been accepted.

Is this an act of war/aggression/stupidity/or nothing? We don't know yet and maybe never. Depends on what happens. What does the photo above convey?. I am not sure, they are all young men.

But currently what one knows will be based on which side of the media one reads. The above article was featured on Google news and reprinted in the Washington Post. If one wants to see how events are spun, this is a good example as different narratives are out there and it is hard to know what is actually happening. We will see where it is in a week.

"the kidnappings, extortion, beatings and killings suffered by many Central American migrants as they cross Mexico. "

Migrant caravan abandons plan to travel to US border

Google this headline to read story.