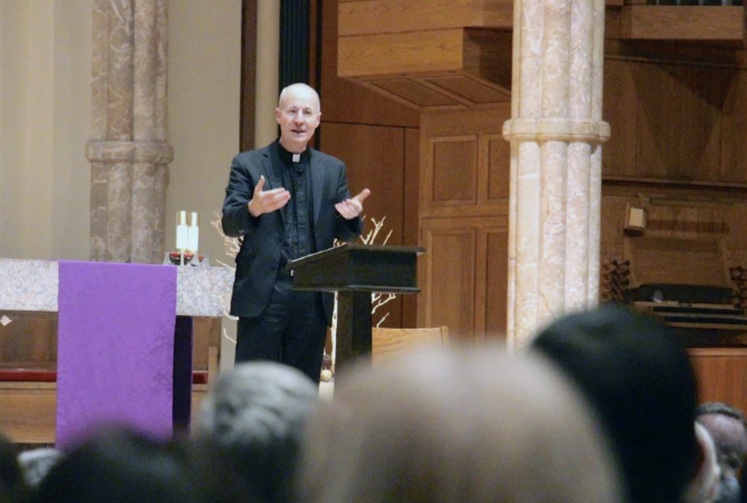 About 150 protesters gathered across the street as the Rev. James Martin gave a talk titled “Encountering Jesus” on March 22, 2018, at Holy Name Cathedral in Chicago. By comparison, the talk sold out all 1,200 tickets. RNS photo by Emily McFarlan Miller

And yet the Rev. James Martin, speaking on the topic at Holy Name Cathedral on Thursday evening (March 22), attracted about 150 protesters. Across the street from the church, they sang hymns and prayed the rosary. They held signs saying “Fr. Martin’s bridge to sin offends God” and “Sin creates chasms not bridges” — references to the title of his book, “Building a Bridge,” which urges dialogue between the Catholic Church and LGBT people.

Supporters too turned out at Holy Name for the first of several talks this week by Martin, who was invited to speak in the Archdiocese of Chicago after criticism of him by alt-right Catholic websites and some conservative Catholic writers. That pushback after the publication of his book last year led to the cancellation of several of his talks.

The protesters belonged to a group of Catholic laypeople called the American Society for the Defense of Tradition, Family and Property, according to its Chicago bureau director, Preston Noell.

Noell said the group had been part of the online campaigns that led to the cancellation of three of Martin’s talks last fall. That’s when Cardinal Blase Cupich of Chicago invited the Jesuit author to give a series of talks about Jesus — the subject of at least one of his canceled talks — in the Archdiocese of Chicago during the last days of Lent, a penitential season observed by many Christians leading up to Easter.

“This is all very very damaging and harmful to the faith, and so we don’t think he should be given a platform. I’m very disappointed he’s here in my town, welcomed unfortunately by Cardinal Cupich,” Noell said, adding that he prays for Martin every day.

Martin told Religion News Service in an interview before his talk that Cupich’s invitation in September was “very welcome because it was a reminder to people that what I’m saying is entirely keeping with the gospels and church teaching.”

“Building a Bridge” has been endorsed by several bishops and two cardinals. The cover of the revised and expanded edition released earlier this month carries the words of Cardinal Kevin Farrell, prefect of the Vatican’s Dicastery for Laity, Family and Life, calling it “A welcome and much-needed book.”

The protesters belonged to a group of Catholic laypeople called the American Society for the Defense of Tradition, Family and Property.

The reception Martin has received at similar events has been “overwhelmingly positive.” At a recent appearance in Los Angeles, he said, people had lined up for three hours to share their stories and have their books signed. There were “lots of tears and hugs and gratitude, mainly.”

“It is an extremely small percentage of people who are against the message, but it’s not surprising. There’s always been homophobia and hatred in the church — even Jesus had to deal with scribes and Pharisees who didn’t want to open their hearts to people,” he told Religion News Service.

Inside the cathedral Thursday night, the pews were packed. Tickets to the talk, which was often lighthearted, were sold out — all 1,200 of them — and only 20 or 30 remained for the next night’s talk, according to the archdiocese.

Martin opened his talk, “Encountering Jesus: Meeting the Christ of Faith and the Jesus of History,” by thanking Cupich for the invitation. And drawing on his reputation as a humorist, Martin also apologized to those who’d come that he was not Sister Jean, the 98-year-old nun and Loyola University Chicago men’s basketball team chaplain who has attained “international celebrity” status during March Madness.

And he talked about Jesus.

“You can’t tame Jesus. Humanity and divinity are both part of his story. Scissor out the uncomfortable parts, and it’s not Jesus we’re talking about, it’s our own creation,” said Martin, a Jesuit priest, best-selling author and editor at large of America magazine.

Marilynn Pathiyil, who attends Old St. Patrick’s Church in Chicago, came to the talk after reading Martin’s book “The Jesuit Guide to (Almost) Everything.” She felt the book changed her life, she said, “like he wrote it just for me.”

“It is an extremely small percentage of people who are against the message, but it’s not surprising. There’s always been homophobia and hatred in the church — even Jesus had to deal with scribes and Pharisees who didn’t want to open their hearts to people."

Pathiyil said the protesters outside made her feel sad, “like they were missing the point almost,” and she spent much of the hour she waited in the line wrapping around the block to enter the cathedral praying for them. She doesn’t know everything about Martin’s views on including LGBT people in the church, she said, but “as far as I’ve read and understand, it’s just to be inclusive of them and love them and be kind and treat them like humans, and I agree with all those things.”

“I think that’s what we’re all called to do. That’s why when I saw them I felt sad. It’s not about changing church doctrine, if that’s what they’re holding onto. It’s just about being loving,” she said.

Not long after the talk had ended, cheers erupted from many of the people still milling around the sanctuary or purchasing Martin’s books in the narthex as they checked the score of the Loyola game on their phones. The Jesuit university had beaten Nevada 69-68 to advance to the Elite Eight in the college basketball tournament.

I appreciate Fr Martin for proclaiming the truth that the LGBT community is part of God's loving family. The NT is not as anti-gay as it seems at first glance. Paul, a celibate, advocated celibacy for all Christians and conceded marriage for those of weak of flesh to prevent fornication. Man with man sex was seen as gratuitous. A gay sexual orientation was unknown just as slavery was accepted as a normal part of life. Jesus rarely spoke of marriage and even taught that there is no marriage in heaven. The Church is dynamic and alive with the Holy Spirit inspiring us anew with deeper understandings of God's manifestation of Love. Just as the Church now understands slavery rejects Love, the Church needs to understand God's Love among the LGBT community. Jesus proclaimed we must judge a tree by the fruits it bears. Anyone who knows a handful of gays, recognizes the truly godly actions and wholehearted love that are shared with others. Married gay men and Lesbians bring up some amazing, wonderful children. When Catholics encounter these loving LGBT individuals, they question the party line of the institutional Church and acknowledge the lie that gays are intrinsically evil just as earlier generations of Catholics rejected the Catholic line that slavery is a normative part of God's plan on Earth. Young Catholics who grew up witnessing the truth that the LGBT community is part of God's loving family, are leaving the Church in droves because they don't tolerate unfounded discrimination. As a devout Catholic, I pray the Church prayerfully reflect on the truth that the Holy Spirit is showing us right in our midst. An honest look at the NT, Jesus' teachings on Love, the deep flaws in Ratzinger's proclamation on homosexuality, and a clear eyed view on the truth on the ground will bring God's kingdom on Earth closer to fruition just as the Church accomplished on the issue of slavery.