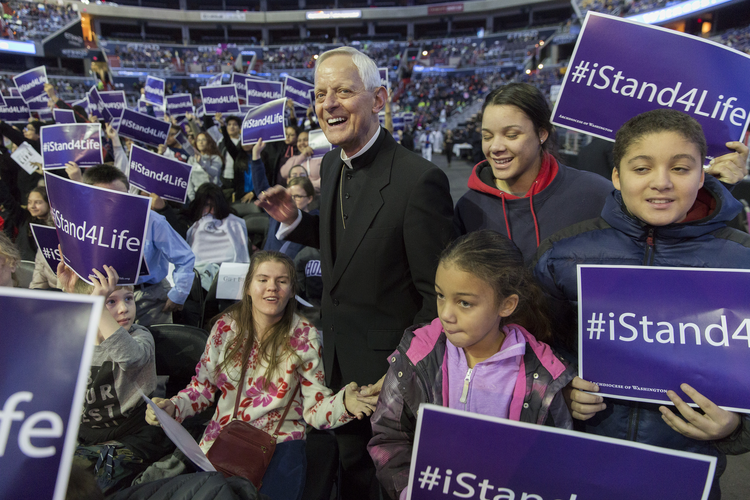 A top ally of Pope Francis is urging parishes in his archdiocese to incorporate the pope’s 2016 apostolic letter on families into pastoral care ministries, becoming the latest U.S. prelate striving to keep momentum behind “Amoris Laetitia” by encouraging church ministers to reach out to families, including those living in “irregular” situations.

Cardinal Donald Wuerl, the archbishop of Washington, will preach on Sunday about the document, “Sharing in the Joy of Love in Marriage and Family,” during Sunday Mass at D.C.’s Cathedral of Saint Matthew the Apostle. The archdiocese said the publication has been distributed in English and Spanish to all its 139 parishes Washington and Maryland.

“The rule to follow in all cases,” the reflection says of family ministry, “is the love and mercy of the Lord.”

“The rule to follow in all cases,” the reflection says of family ministry, “is the love and mercy of the Lord.”

The nearly 60-page document, which includes a reflection on the primacy of conscience in Catholic life along with tips for pastoral ministers on how to walk with Catholics in “irregular” family situations, quotes heavily from “Amoris Laetitia” and ties the pope’s teaching to those of his predecessors, including Pope Benedict XVI.

Cardinal Wuerl was present at the 2014 and 2015 synods in Rome called by Pope Francis that serve as the basis for “Amoris Laetitia,” which has become something of a lighting rod since its publication. Some bishops who support the pope’s pastoral vision are holding seminars, issuing reflections and encouraging priests to reflect on the letter’s teachings.

In the United States, the Diocese of San Diego was an early adopter, with Bishop Robert McElroy holding a diocesan-wide synod focused on the letter in 2016. Bishops in Germany and Argentina have embraced the letter’s more controversial aspects, including creating a pathway to Communion for some divorced and remarried Catholics. More recently, a number of U.S. bishops, including Cardinal Blase Cupich and Cardinal Joseph Tobin, gathered with lay theologians at seminars at Boston College, Notre Dame and Santa Clara University to discuss ways to integrate “Amoris Laetitia” into parishes.

Critics have accused Francis of undermining church teaching in some areas, especially when it comes to divorce and remarriage. The D.C. letter tries to calm those fears, stating, “No, the Church’s teaching has not changed; objective truth remains unaffected.”

Nonetheless, the document encourages pastoral ministers, “with humility and compassion, to reach out to the people and families who struggle to live the teaching on marriage, and to help them to overcome obstacles through discernment, dialogue and prayerful support and understanding to overcome obstacles.”

The document encourages pastoral ministers, “to reach out to the people and families who struggle to live the teaching on marriage.”

The document says that “a world marked by secularism, materialism and individualism, all supporting a prevalent and dominant relativism,” makes it difficult for many families to receive church teaching. However, it says, Pope Francis “asks us to be a Church that walks with individuals and families whose marriages or family life may not reflect the fullness of God’s vision and to assure them of their place in the family of God and share the Good News that in Jesus all things will be made new.”

Regarding Catholics living in irregular situations—including those who are divorced and remarried, cohabiting or identify as gay or lesbian—the letter states that “a person whose situation in life is objectively contrary to moral teaching can still love and grow in the faith, he or she can still take steps in the right direction and benefit from God’s mercy and grace while receiving the assistance of the Church.”

It gives concrete examples of how to “accompany” people living in various circumstances, including the “hurting,” the “distracted” and the “anonymous.”

“For some, anonymity means the lack of authentic friendships, sneaking in and out of church without notice, young people church-hopping Sunday after Sunday without belonging to a parish community, or simply the ‘same-old, same-old’ drudgery day after day,” the document says.

“Many others feel anonymous within their own families, communities, or churches,” it continues, “the poor, persons with mental health challenges, those of different races or ethnicities who are not part of a majority, the divorced and remarried, those experiencing infertility or miscarriage, the undocumented and other immigrants, those without jobs or the underemployed, single people, those who identify with same-sex attraction.”

“A Church that accompanies will go out to call each person by name and to welcome back those who feel lost or alone,” it says.

The document includes several practical suggestions on how to engage Catholics of all ages in family ministry, as well as ideas for families struggling with particular challenges, including those facing separation because of military service, challenges with migration and family members with special needs.

The archdiocese said in a press release that it was promulgating the reflection in anticipation of the 2018 World Meeting of Families, which kicks off in Dublin this summer.

Correction: This article initially misstated when the apostolic letter was announced by Cardinal Wuerl.

I agree with being compassionate towards people who live in difficult or "irregular" family situstions. I'm an admittedly imperfect Catholic , who as a gay man years ago had sex with men. However, I realized my acts were wrong, and went to the Sacrament of Reconciliation with a compassionate priest. I do occasionally keep in touch with an old friend who's gay, and in fact called him on the phone today, and look forward to hearing from him soon. I know many divorced Catholics, including my sister and her husband whom I love and who are a loving couple and parents. They had a civil marriage after my brother-in-law got a divorce, and subsequently had a sacramental marriage after he was granted an annulment. I know divorce is usually a very difficult situation, but I believe people should seek an annulment to. " regularize" their circumstances and then (hopefully) receive the consolation of a sacramental marriage. As a retired Special Education teacher, I certainly agree with the need for assisting people with a disability and their families. I worked.in a group home in past years with disabled men, and several of my co-workers were immigrants from Liberia, who had fled from a brutal civil war seeking a better life. I agree that Catholic immigrants also face great difficulties, and should be warmly welcomed into parish communities. However, without being insensitive, I do believe that people shouldn't live together before marriage. As a single man, I sometimes am lonely and become a little discouraged. But I generally find that by prayer for strength to Jesus, and my relationships with family and grow that I find my life to be satisfying. I believe that in a sense single men and women can be in a quandary because of pressure from some well-meaning people for them to marry. I believe that single people should be given time to decide on whatever vocation will bring them happiness in life. It's sad that many young people feel a sense of alienation from the Church. I believe that priests and pastoral ministers and all good Catholics should try to reach youth with the truths of our faith in a manner that can appeal to them "using their language" while upholding the authentic teachings of Jesus 'Church. Finally, I'm glad that Cardinal Wuerl affirms the objective truth of the Church's teachings about the family. However, Pope Francis is warmly sensitive to people "whose marriages or family life may not reflect the fullness of God's vision and to assure them of their place in the family of God."

My dear children, let us not love in word, neither with the tongue, but in deed and in truth. (I John 3:18)

To feed the hungry.
To give drink to the thirsty.
To clothe the naked.
To visit the imprisoned.
To shelter the homeless.
To visit the sick.
To bury the dead.

To admonish the sinner.
To instruct the ignorant.
To counsel the doubtful.
To comfort the sorrowful.
To bear wrongs patiently.
To forgive all injuries.
To pray for the living and the dead.

The objective truth of The Catholic Church's teaching includes both the corporal and spiritual works of Mercy.
God desires that we desire to overcome our disordered inclinations so that we are not led into temptation and sin; God desires we become transformed through Salvational Love, God's Gift of Grace and Mercy.

“A new commandment I give onto you: that you Love one another, as I Have Loved you, that you also Love one another.”
Christ Has Revealed through His Life, His Passion, and His Death On The Cross, that no greater Love is there than this- to desire Salvation for one’s beloved.

To admonish the sinner, to instruct the ignorant, to counsel the doubtful-are necessary acts of Mercy that are necessary when sharing The Good News.

The rather rigid interpretation that you provide here lacks one important ingredient: to accomplish all the things that you describe, you need a human being with whom to share those good works.

The kind of self-righteous expressions that you make here are often what causes some baptized Catholics, well, for that matter, most human beings of whatever persuasion, to regard themselves as unwanted and rejected. Catholic churches, when I was a child, were places of very few saints and lots of sinners, and that often included the clergy. A lot of people who attend church now think just the opposite, in fact think of themselves as the saints, charged by God and the catechism, to lecture the world to mirror their saintliness. With the exception of religious hypocrites, even Christ did not behave that way towards sinners. He welcomed their interactions, He corrected them without berating, offending, excluding, or rejecting them. Maybe, just maybe, that's what Pope Francis is trying to get us to do as well?

We are all sinners. If it were true that it is Loving and Merciful to desire that we remain in our sin, and not desire to overcome our sinful inclinations, and become transformed through Salvational Love, God's Gift of Grace and Mercy, we would not need Our Savior, Jesus The Christ.
To admonish the sinner, instruct the ignorant, and counsel the doubtful, are necessary acts of both Love and Mercy. How then, can you suggest that spiritual works of Mercy lack Love and Mercy? Although we are sinners, we are called to desire to become Saints. Our Call to Holiness, has always been a call to be chaste in our thoughts, in our words, and in our deeds.

You missed my point. Your tone of dismissiveness to what I wrote is the very thing that I was trying to explain. You seemingly do not hear yourself.