Pope Francis calls for day of prayer and fasting for peace, especially for the DRC and South Sudan 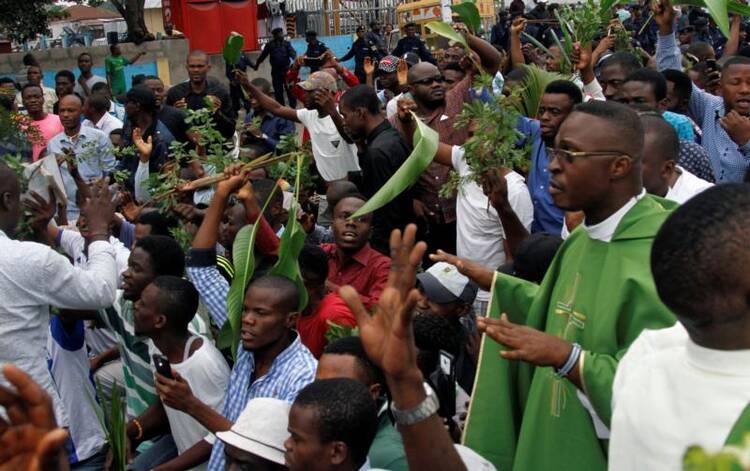 A priest and other demonstrators chant slogans during a protest organized by Catholic activists in Kinshasa, Congo. At least six people were killed during demonstrations across the country against delayed elections and Congolese President Joseph Kabila. (CNS photo/Kenny Katombe, Reuters)

Pope Francis has called for a "special day of prayer and fasting for peace in the world" on Friday, Feb. 23, 2018, particularly for peace in the conflict-stricken nations of the Democratic Republic of the Congo and South Sudan. He invited Catholics and other Christians as well as followers of other religions and people of good will to join in this event.

He made the surprise announcement on Sunday, Feb.4, after praying and reciting the Angelus with thousands of pilgrims from many countries gathered in St. Peter’s Square. “In the face of the tragic continuation of conflicts in different parts of the world, I invite all the faithful to a special day of prayer and fasting for peace on February 23, the Friday of the first week of Lent,” he said.

“We will offer it especially for the populations of the Democratic Republic of the Congo (DRC) and of South Sudan,” he added.

He invited “our brothers and sisters who are non-Catholic and non-Christian to join in this initiative in ways they consider most opportune.”

Pope Francis has expressed a desire to visit both countries. Their inhabitants have suffered greatly from long-standing conflicts, and in both countries the church has actively sought to promote peace and an end to fighting. The authorities of the DRC advised against such a visit for what they said were security reasons, though president Kabila of the DRC visited Pope Francis at the Vatican in 2016.

Similarly, while Pope Francis met with the president of South Sudan during his visit to Uganda, and planned to visit the country together with the Anglican primate and Archbishop of Canterbury, Justin Welby, he was informed last year the conditions were not yet right for a papal visit to South Sudan.

Until recently the DRC has been at the center what has been called “Africa’s world war,” a multi-state conflict that has claimed as many as 6 million lives due to armed conflict, disease or malnutrition.

The DRC (formerly Zaire) is a vast country in central Africa of almost 80 million people, 70 percent of whom are Christian (50 percent of the population is Catholic), with vast mineral wealth and economic resources. Until recently the DRC has been at the center what has been called “Africa’s world war,” a multi-state conflict that has claimed as many as 6 million lives due to armed conflict, disease or malnutrition. The DRC has been plagued by fighting and corruption (including by foreign interests seeking control of its vast mineral wealth), with multiple sides taking advantage of the violence and anarchy to plunder the nation’s natural resources. The DRC has faced further unrest in recent weeks after the shooting of pro-democracy churchgoers protesting President Joseph Kabila, who refused to step down when his mandate expired at the end of 2016. The United Nations has a peacekeeping force in the east, but conflict continues in the country.

More than 3.5 million people have been displaced in South Sudan, around 2 million internally; 1.5 million more (80 percent of them women and children) have fled to neighboring countries.

South Sudan is an oil-rich, ethnically diverse country of an estimated 10 to 12 million people that gained independence from Sudan in 2011 after a twenty-year civil war. It is one of the world’s newest but also one of its most underdeveloped states. Around 60 percent of the population is Christian, mainly Catholic (37 percent of the population) and Anglican, while over 30 percent are followers of African Traditional Religions. More than 6 percent are Muslim. A civil war with strong ethnic dimensions broke out in 2013 between the government of President Salva Kiir Mayardit, a Catholic and an ethnic Dinka (the majority ethnic group in the country) and opposition forces of former (twice deposed) vice-president Riek Machar, a member of the Nuer, the second-largest ethnic group.

Despite a peace agreement signed in 2015, the conflict has continued and caused the deaths of an estimated 300,000 people. Some 3.5 million more have been displaced, around 2 million internally; 1.5 million more (80 percent of them women and children) have fled to neighboring countries, especially Kenya, Sudan, and Uganda, and now make up the world's third-largest refugee population after Syria and Afghanistan. The conflict has also caused famine in some areas.

Turning to his worldwide audience, Pope Francis said, “I make a heartfelt appeal so that we too listen to that cry and each of us, in our own conscience, ask ourselves before God, ‘What can I do for peace?’”

In his announcement today, Pope Francis told pilgrims, “Our Heavenly Father always listens to his sons and daughters who cry to him in their pain and anguish.” Then turning to his worldwide audience, he said, “I make a heartfelt appeal so that we too listen to that cry and each of us, in our own conscience, ask ourselves before God, ‘What can I do for peace?’”

“Certainly,” he said, “we can pray, but not only that: Each one can concretely say NO to violence inasmuch as it depends on him or her. Because all the victories gained by violence are false victories; but to work for peace does good to us all!”

I think it's tragic that South Sudan and the Democratic Republic of the Congo (DRC) have such huge problems, both from within and outside their countries. I hope that the United Nations peacekeeping force in the East in the DRC can do their best to contain the violence in the conflict wracked nation. I certainly can't claim to be knowledgeable about the situation in that nation. But I do wonder why the United Nations peacekeeping force is restricted to only one region of the DRC. I do believe that God answers prayers, but there must be more that people of goodwill can do. Perhaps our nation and other nations of the West can expand trade with both South Sudan and the Democratic Republic of Congo. Increased trade with foreign nations may help alleviate some of the monstrous poverty. Finally, I do believe that Western nations including the United States should both provide immediate humanitarian assistance to help those who are struggling with famine, as well as long-term assistance with farming. Catholic Relief Services, which I on occasion have made modest contributions to, as well as other charitable organizations may also be of great assistance. I certainly will pray for the people of both nations on February 23 and whenever I think of their people.