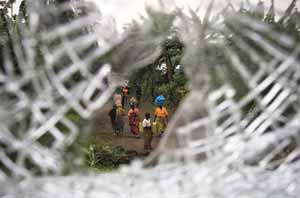 Despite its immense natural resources, the Democratic Republic of Congo has yet to benefit from them; most of its population lives in poverty. Ferdinand Muhigirwa, S.J., is familiar with Congo’s potential as well as with the obstacles delaying the country’s economic development. He is the director of Cepas (Centre D’études pour l’Action Social), a research and social action center in Kinshasa, the country’s capital. During a visit to Washington, D.C., he discussed several of the important issues facing his country.

Congo’s natural resources include vast forest areas and deposits of gas and oil; but when we met, Father Muhigirwa spoke mainly of minerals. “Congo is especially rich in copper, gold, cobalt and coltan,” he said. (Coltan is a combination of two minerals used widely in the electronics industry for products like the microchips in cellphones.) “Congo is poor, because multinational companies from abroad have exploited our resources without giving us a fair share of what they take out,” he explained. The companies, based in countries like the United States, Canada, Belgium, South Africa and China, come in and conduct studies of the areas where they are interested in mining. “Then they acquire contracts from the government for the exploitation of minerals for periods as long as 20 or 30 years,” he said, adding that these contracts have benefited neither the economy nor the Congolese people.

Father Muhigirwa hopes that the government of President Joseph Kabila, the first democratically elected president in over 40 years, will conduct what he calls “a more careful review of the mining contracts, because the mines belong to the Congolese people, who should be benefiting from them.” According to the priest, the mining sector is a key to the generation of real income for the nation, and the government has set up a commission to see how this can best be done. In June 2007, the government began a formal review of 60 mining contracts signed between 1996 and 2003, to evaluate their legality and fairness and to decide whether to keep, renegotiate or cancel them. “What’s needed,” Father Muhigirwa emphasized, “are transparency and accountability in order to get rid of the exploitation and corruption that presently prevail.”

Efforts by the Church

When asked about the role of the Catholic Church in efforts to help the country benefit from its resources, Father Muhigirwa replied that the bishops have played a strong role. In their pastoral letter of July 2007, they wrote:

Instead of contributing to the development of our country and benefiting our people, the minerals, oil and forest have become the causes of our misfortune. How is it that our fellow citizens find themselves, without compensation, dispossessed of their land by the fact that surfaces have been allocated or sold to one or the other mining company? Is it acceptable that Congolese workers are treated...without regard for their rights and human dignity?

The bishops also have established an episcopal commission to monitor the contract review process in order to ensure transparency. And, said Father Muhigirwa, “the bishops are now asking the Congolese government to set conditions for renegotiation in such a way as to respect their environmental obligations, too.”

Father Muhigirwa said that although every child has the right to free primary education, it is not yet free in practice, because parents must contribute to the cost of the teachers’ salaries, which are too meager to cover their basic needs for food, shelter, transportation and health care. “Two years ago, the government agreed to increase the teachers’ salaries,” Father Muhigirwa said, “but the agreement has not yet been implemented.” The situation is more worrisome in areas where valuable minerals are found. Youngsters, parents and teachers search for them. They dig for the minerals in what is known as artisanal mining, hoping to sell what they find to local dealers, who then sell the minerals to the mining companies. “Young people often simply stop going to school as a result,” said the priest.

Another resource Congo could develop is agriculture. The soil is very fertile, and people can raise their own produce for food and for sale. They encounter problems, however, with transportation and infrastructure. There are too few roads on which to move the produce from the countryside to the towns; an adequate transportation system has not yet been developed. “As a result,” Father Muhigirwa told me, “tons of rice, maize and other crops are left to rot in the fields.”

A related problem concerns European countries that export their subsidized surplus food to Congo, where it is sold at lower prices than the local farmers charge. “Our markets are flooded with imported chicken from Belgium and fish from Portugal, and so most people cannot afford to buy our own local foods because of this unfair trade situation,” said Father Muhigirwa. In an effort to correct the situation, the government has begun negotiations with European countries, planting a hope that African products can be sold there too. “But change that brings economic justice will take a long time to bring about,” he said.

Among the hopeful signs for Congo is the democratic process, including the election of President Kabila, 500 members of parliament and 120 senators. An active women’s movement, which has received support from a number of nongovernmental organizations, has made significant progress in Congo. “However,” Father Muhigirwa said, “female representation in government is still very low. For example, there are only 42 women in Parliament out of 500 members.” The new constitution calls for parity in the political field, but it has not happened yet. Of 33 presidential candidates, there were six women, the priest said, “and none of them won even 1 percent in the polls.” Cepas, his own organization, has started working with women’s non-governmental organizations to help women organize themselves more effectively.

The bishops have committed themselves to an emphasis on civic education in all the parishes. “Our large population of young people is another good sign,” Father Muhigirwa said. “Over half of all Congolese are under 25.” He also noted what he called “positive news” about vocations to religious life; in Kinshasa alone, there are numerous women’s congregations, “so the church is growing in that sense,” he said. The church does not work in a vacuum. “The relationship with Protestant churches is also good,” said the priest, adding that they too are involved in civic education. Catholics and Protestants together account for almost 70 percent of the population in Congo.

Hopes Dashed on the Rocks of Violence

Violent insurgents in eastern Congo have gained ground in recent weeks, however, bringing slaughter and chaos that have sent thousands more Congolese fleeing from their homes. Conflict may prove to be the people’s worst enemy, for it has all but dashed their hopes for a stable democratic government, for economic development and for the education of their children. Now the situation is dire.

Civil strife kept the country from developing as it might have during the last decade. And the war that began in 1998, linked with the illegal exploitation of natural resources, involved several other African countries. Father Muhigirwa said that the human cost is “the bloodiest since the Second World War, with over five million lives lost, according to the International Rescue Committee, and 1.5 million internally displaced persons and, between 2006 and 2007 alone, an estimated 40,000 cases of rape.” And that was in summer. A coordinated diplomatic effort led to a cease-fire agreement signed by the insurgents and the Congolese army, but it proved fragile and fell apart. The United Nations stationed its largest peacekeeping force in Congo, but it has not been able to keep the peace.

In August, Laurent Nkunda, a rebel general, took on the government and has made much headway since then. By fall his troops had nearly captured the city of Goma in eastern Congo, when Nkunda himself declared a cease-fire. On Nov. 7, U.N. and African leaders met in emergency session in Nigeria and called for an end to the conflict. But as U.N. Secretary General Ban-ki-Moon said then, there have been many meetings and agreements, “It’s a matter of political will.” Political will is lacking on the part of those who could bring it to bear. The rebel groups must be disbanded. Meanwhile, the people of Congo must wait for a chance to improve their lives.

This article also appeared in print, under the headline “Congo's Lament,” in the December 15, 2008, issue.